Read: Countries and Capitals of the World

The Solar System was formed by the gravitational collapse of a large interstellar molecular cloud 4.6 billion years ago, and the Sun contains the vast majority of the system’s mass. Mercury, Venus, Earth, and Mars, the four smaller inner system planets. Mercury, Venus, Earth, and Mars are also called terrestrial planets. Mercury, Venus, Earth, and Mars are made mostly of rock and metal. The four planets in the outer system are also called gigantic planets. These gigantic planets are Jupiter and Saturn, the two largest planets, are gas giants made mostly of hydrogen and helium. Uranus and Neptune, the two outermost planets, are ice giants, made up largely of materials with high melting points. The orbits of all eight planets are roughly round and lie inside a nearly flat disc known as the ecliptic. 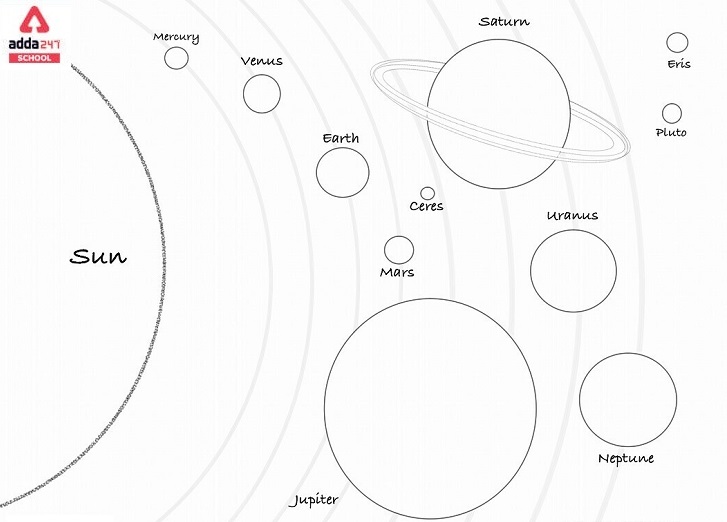 In the solar system, there are eight planets. Mercury, Venus, Earth, and Mars are the four inner terrestrial planets, all of which are mostly made of rock. Jupiter, Saturn, Neptune, and Uranus are the four outer planets, which are gigantic planets made mostly of gases or ice. Pluto was thought to be the ninth planet until 2006 when the International Astronomical Union decided to categorise it as a dwarf planet.
The Sun, which holds more than 99 per cent of the mass of the solar system and influences the motion of all other bodies by its gravitational attraction, is at the centre of the solar system.
Apart from the planets and the sun, Smaller objects can also be found in the Solar System. The asteroid belt, which sits between Mars and Jupiter’s orbits, is primarily made up of rock and metal objects, similar to the terrestrial planets. The Kuiper belt and dispersed disc are populations of trans-Neptunian objects largely made of ices. The Kuiper belt and dispersed disc sit beyond Neptune’s orbit, as does a newly discovered population of sednoids. Some objects among these populations are massive enough to have rounded under their own gravity, however, how many there will be is a matter of discussion. Other small-body populations, like comets, centaurs, and interplanetary dust clouds, are also free to move across areas. 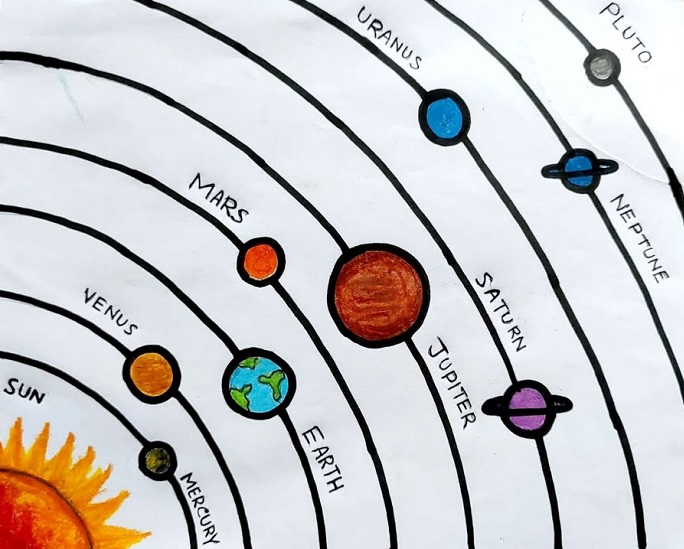 The planets and dwarf planets in the Kuiper belt, as well as rocky asteroids and icy things, orbit the Sun in elliptical orbits in the same direction as the Sun revolves, a motion known as prograde. An observer looking down on the system from a vantage point above Earth’s North Pole would see that all of the orbital motions are counterclockwise. The comet nuclei in the Oort cloud, on the other hand, are on orbits with unpredictable directions.
Venus and Neptune have the most circular orbits around the Sun of the eight main planets. The inclination and eccentricity of an object’s orbit around the Sun are defining characteristics.

Solar System: Planets and their density

Only Earth has a strong magnetic field that protects it from the interplanetary medium among the inner planets. The magnetosphere is an area surrounding Earth where the magnetic field captures some of the interplanetary medium’s electrically charged particles. The Van Allen belts in the inner magnetosphere have substantial concentrations of these high-energy particles. The four large outer planets are far more massive than the terrestrial planets, with massive atmospheres dominated by hydrogen and helium. They don’t have solid surfaces, and their densities are so low that one of them, Saturn, could float on water. Each of the outer planets has its own magnetic field, ring system, and numerous known moons, with more on the way. Pluto has only five known moons and no known rings. The majority of known moons orbit their planets in the same direction as the planets orbit the Sun. They represent a wide range of settings and are incredibly diverse. Io, Jupiter’s largest moon, is orbited by Saturn’s largest moon, Titan, which is wracked by tremendous volcanism. Triton orbits Neptune in a backwards motion.

What are the names of the solar system’s nine planets?

Why is Pluto no longer classified as a planet?

Pluto’s status was reduced to that of a dwarf planet by the International Astronomical Union (IAU) because it failed to meet the three criteria used by the IAU to identify a full-sized planet.

What happened to Pluto?

Dwarf Pluto is now located in the Sagittarius constellation.

On Pluto, how long does a day last?

What is the hottest planet in the universe?

Venus is the hottest planet in the solar system.