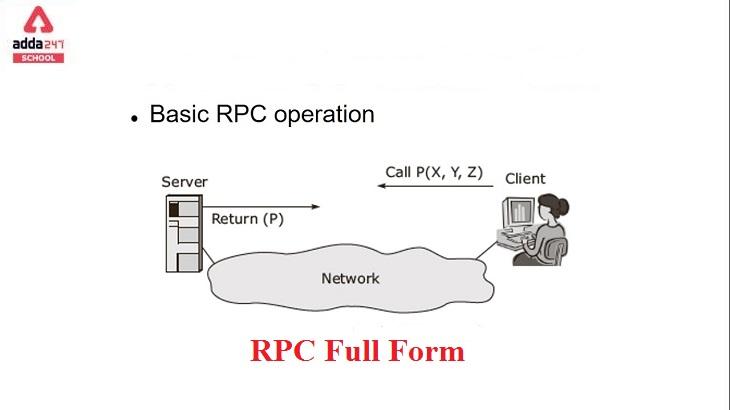 RPC Full Form: The full form of the abbreviation, RPC, is Remote Procedure Call. A remote procedure call (RPC) in distributed computing occurs when a computer programme causes a procedure to execute in a separate address space, programmed as if it were a normal procedure call, but without the programmer explicitly coding the details for the remote interaction. That is, whether the subroutine is local to the current programme or remote, the programmer writes essentially the same code. A request-response message-passing system is often used to implement this type of client-server interaction. RPCs are represented via remote method invocation in the object-oriented programming paradigm (RMI).

The RPC model requires some degree of location visibility. Remote calls are typically orders of magnitude slower and less dependable than local calls, it’s critical to know the difference.

Another full form for the abbreviation RPC is recurrent pyogenic cholangitis. This term is related to the medical world.
Read About: Role and Uses of Internet in Education

RPC Full Form in Banking: what is RPC stands for?

Theoretical ideas of remote procedure call as the paradigm of network operations date from the 1970s, while real implementations emerge from the early 1980s.

Brian Randell and colleagues implemented one of the first practical implementations in 1982 for their Newcastle Connection between UNIX workstations.

Andrew Birrell and Bruce Nelson’s “Lupine” was soon after in the Cedar environment at Xerox PARC. Lupine employed an efficient protocol for communication and automatically generated stubs with type-safe bindings. Xerox, under the moniker “Courier,” was one of the first businesses to employ RPC in 1981. Sun’s RPC, which served as the foundation for Network File System, was the first widely used RPC implementation on Unix.

With the rise of object-oriented programming in the 1990s, an alternative concept of remote method invocation (RMI) became prominent. RMIs, on the other hand, declined in popularity as the internet grew in popularity, notably in the 2000s.

RPC in Blood Test: The following diagnostic tests are used in the treatment of recurrent pyogenic cholangitis (RPC): Total blood count (CBC): In patients with pyogenic cholangitis, leukocytosis with a left shift is common.
Read About: Major Issues and Problems in India

The client initiates an RPC by sending a request message to a known remote server, instructing it to run a specific procedure with specified parameters. The client receives a response from the distant server, and the application continues its work. Unless the client performs an asynchronous request to the server, such as an XMLHttpRequest, the client is stalled until the server processes the call. There are numerous differences and nuances among implementations, resulting in a plethora of RPC protocols.

Remote procedure calls differ from local procedure calls in that remote calls can fail due to unpredictably bad network connections. Callers must also cope with such failures without knowing whether or not the remote process was actually called. Idempotent procedures are simple to handle, however calling distant procedures is frequently limited to carefully constructed low-level subsystems due to the limitations.

What is the full form of RPC?

The full form of the abbreviation, RPC, is Remote Procedure Call.

What does RPC stand for?

RPC (Remote Procedure Call) allows one computer to request a service from another programme on a network and that too without having to understand the network’s details.

What is the purpose of RPC?

RPC has an authentication method that allows the server and client to be identified.

What are the primary characteristics of the RPC model?

Batching calls, broadcasting calls, callback methods, and the use of the select subroutine are all features of RPC.

In banking, what does RPC stand for?

The State Bank of India (SBI) is working on establishing a regional processing centre (RPC).