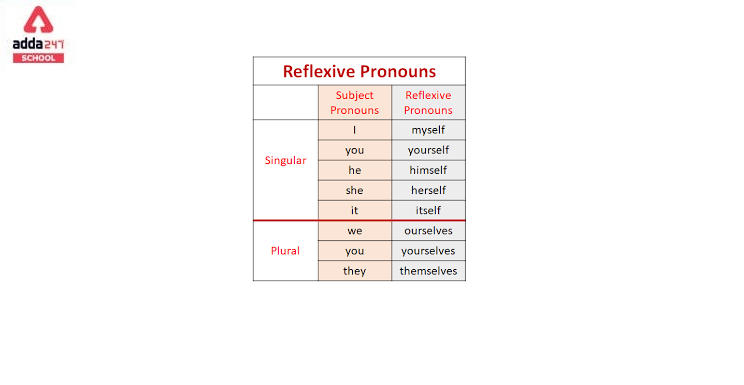 Reflexive pronouns are words ending in -self or -selves  that are used when the subject and object of a sentence are the same (eg I believe in myself). It can act as an object or an indirect object. The nine reflexive pronouns in English are myself, yourself, himself, herself, oneself, itself, ourselves, yourselves, and themselves.

Look at the following table for easy understanding

When and How to use reflexive pronoun?

A reflexive pronoun is used to denote that an action is done and received by the same subject. It reflects the action on itself and doesn’t involve another object. In a very nutshell, a reflexive points out that the doer and the receiver of the action are one and the same in a sentence.

Reflexive pronouns may seem unnecessary in some situations, but they are very useful for clarity when using the third person plural form of pronouns. It also helps highlight the fact that the task is being done by that specific person.

He looked at himself.

In the example given above, there is some ambiguity in the use of “him” in the first sentence. It is not certain whether “he” refers to someone else or he refers to himself. This is where reflexive pronouns prove very useful in providing complete meaning.

Example 2:- I learned to bake a cake myself.

I learned to bake a cake.

Example 3: It is a fact that you know yourself and your potential.

In the above example, it is evident that the subject knows oneself more than anyone else.

Example 4: Tulika and Ashu have been preparing themselves for the examination.

Tulika and Ashu are the subjects in example 4 who happen to prepare themselves and no one else.

Example 5: Rahul was so tired of his daily routine that he decided to give himself a rest day.

In the above example, the reflexive pronoun ‘himself’ portrays the idea that the subject gave himself a rest day after having the same routine for a long period of time.

Difference between Reflexive and Emphatic pronouns

Use reflexive pronouns when referring to the same person, animal, or thing as the subject and object of an action. For example, consider the statement “The dog covered himself with the blanket” The reflexive pronoun here is “himself.” It indicates that the action is being done against oneself. In other words, the animal took action to cover itself.

Like reflexive pronouns, emphatic pronouns are compound personal pronouns and they also refer to the object of action to the subject.

So what is the difference between the two?

Emphatic pronouns are only used to emphasize and highlight the action of the subject.

3. How do you use reflexive in a sentence?

I hope you have clearly understood the reflexive pronoun. Good luck!