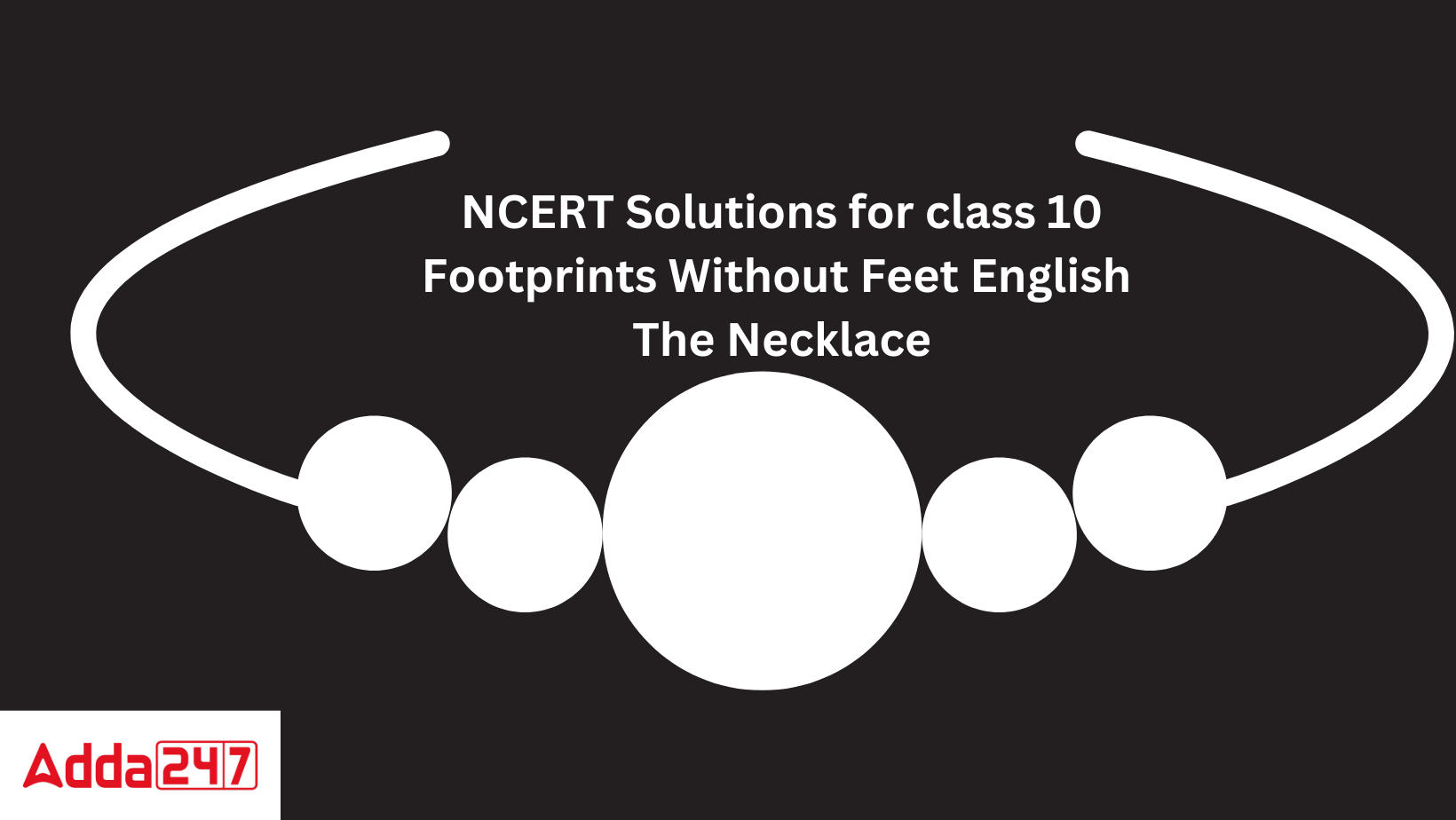 This is the tale of Matilda Loisel, a lovely young lady who was raised by impoverished parents. She was wed to Monsieur Loisel, a clerical worker in the Board of Education’s office. Once, a lavish party invitation was sent to Matilda and her husband. She spent $400 on a lovely outfit, but she didn’t have any jewellery to go with it. So Mme Loisel asked her friend Mme Forestier for a necklace. She was happy because she had a stunning and sophisticated appearance at the gathering. At the ball celebration, she eagerly danced. But when she got home, she realised the diamond necklace was gone. With 36 000 francs, she and her husband replaced Mme Forestier’s necklace with a matching diamond piece. They toiled long and hard for ten years to pay back the necklace’s debt. Matilda contacted Mme Forestier one fine day and informed her of the necklace’s disappearance and its replacement. Mme Forestier was shocked when she heard this and said that the jewellery Matilda had taken from her was fake and not worth more than 500 francs.

Question 1: What kind of a person is Mme Loisel — why is she always unhappy?

Answer: Young and attractive Mme Loisel lived a straightforward but miserable existence. Despite coming from an impoverished family, she had always dreamed of wealth and luxury. She was always miserable since she was aware that her dreams would never come true. She was aware that her limited means wouldn’t be sufficient to fulfil her extravagant demands, and this made her unhappy and frustrated with her predicament.

Question 2: What kind of a person is her husband?

Answer: Monsieur Loisel, Matilda’s husband, was a straightforward and common young guy. Although he was a little clerk at the Board of Education office, he was happy with his work. He brought his wife a dinner invitation to a lavish party with great excitement. Despite his poverty, he was a loving husband who gave his beloved wife 400 francs so she could purchase a pretty dress for the party.

Answer: After spending 400 francs on a lovely garment, Mme Loisel was troubled by yet another brand-new issue. She worried that she wouldn’t have a lovely jewel to go with her lovely clothing. When he learned this, her husband suggested she wear some natural flowers as jewelry. She declined, saying there was nothing more embarrassing than to appear untidy amongst wealthy women.

Question 2: How is the problem solved?

Answer: Monsieur Loisel, Mme Loisel’s husband, first recommended she wear some natural flowers as jewellery, but she rejected the notion. Then he suggested that she ask her wealthy acquaintance Mme Forestier for permission to borrow some jewellery. Matilda exclaimed with excitement at this amazing thought. The following day, she drove herself to her friend’s house and chose a stunning diamond necklace to go with her lovely outfit. Therefore, the issue was resolved by her husband’s wise suggestion.

Question 1: What do M. and Mme Loisel do next?

Answer: The Loisels searched everywhere after realising that the necklace was missing, but they were unsuccessful in finding the stolen gem. In case it had unintentionally fallen onto the road, Monsieur Loisel even returned to the streets they had used to get home. When he was unsuccessful in his search, he visited the taxi and police departments and published an advertisement in the media offering a reward to anyone who could locate the necklace. Soon after, he instructed his wife to inform Mme Forestier in a letter that the necklace’s clasp had broken and that he would return it once it had been fixed.  They would have more time to find the necklace as a result. All of their efforts, however, were in vain. They eventually purchased a new diamond necklace to replace the one they had lost.

Question 2: How do they replace the necklace?

Answer: After exhausting all of their options in vain, M. and Mme. Loisel made the decision to replace the lost necklace by purchasing a brand-new, similar necklace. M. Loisel had eighteen thousand francs of his inheritance, and by making ruinous promises to usurers and the entire race of lenders, he borrowed the remaining money. Once they had enough money to borrow, the couple went to a shop, spent 36,000 francs on a new necklace, and then gave it back to Mme Forestier.

Question 1: The course of the Loisels’ life changed due to the necklace. Comment.

Answer: The necklace had a profound impact on the Loisels’ lives. They needed ten years to pay back the loan they took out to purchase the necklace. Everything changed for them to be able to pay back the debt, and their world was turned upside down. They moved into a new place, fired the maid, and hired some rooms in an attic. Matilda performed all the laborious culinary tasks, cleaned the dirty linen, and haggled with the butcher and grocer to preserve every last sou for bare survival. To pay off their debt, her spouse worked into the night and took on odd jobs. The couple struggled to make ends meet and pay off their horrendous debt from the purchase of the pricey jewel.

Question 2: What was the cause of Matilda’s ruin? How could she have avoided it?

Answer: The root of Matilda’s downfall was her materialistic desires and discontent. She was constantly depressed about her financial situation and wished she had been born amidst wealth and luxury. She could have easily avoided ruin if she had been pleased with her modest lifestyle and loving spouse in the present.

Question 3: What would have happened to Matilda if she had confessed to her friend that she had lost her necklace?

Answer: Matilda could have avoided her fate if she had the strength to bravely tell her friend Mme Forestier that the necklace had been lost. Her companion would have undoubtedly become upset about the loss, but at least she would have learned that the necklace was a fake and only cost 500 francs. She wouldn’t have used her husband’s entire inheritance and taken out a loan for 18,000 francs to replace the lost jewellery if she had understood the necklace’s true worth earlier. Additionally, she could have spared herself and her husband the ten years of agony, misery, abject poverty, and all the hardship they had to endure in order to pay off the horrifying debt.

Question 4: If you were caught in a situation like this, how would you have dealt with it?

Answer: I would have done everything I could to avoid falling prey to avarice and irrational goals if I had found myself in a similar circumstance. If I had misplaced a friend’s necklace, I would have come clean about it and been prepared to take the fallout. If I had continued to be honest, I would have been able to escape the situation, and that would have undoubtedly prepared the road for me.

Question 1: The characters in this story speak in English. Do you think this is their language? What clues are there in the story about the language its characters must be speaking in?

Answer: Despite the fact that the story’s characters communicate in English, English was probably not their native tongue. The narrative was first written in French by Guy De Maupassant, and it was then translated into English. There are many clues in the text that attest to the characters’ French heritage, such as the salutations used before their last names—”Monsieur and Mme Loisel,” “Mme Forestier,” and the minister’s name, “George Ramponneau.” In addition, words like “Franc” and “Sou” that signify currency are used. The business was then located near “Palais Royal” and “Champs Elysees,” which emphasise the French heritage and history of the story’s characters.

Answer: The best course of action is to be honest. We all understand that pride and hypocrisy initially appear to be very lucrative and alluring. However, a person who chooses the erroneous road is likely to live in sorrow, pain, and complete gloom. On the other hand, an honest person may first have challenges in life, but it finally brings him or her all the joys they are due. Therefore, the best course of action for living a life of contentment, harmony, and eternal happiness is to be honest.

Question 3: We should be content with what life gives us.

Answer: Yes, we should be content and at peace with what life has to offer. Every person in the world is born under unique circumstances, and the entirety of his or her life is a big mystery. Some people inherit wealth, luxury, renown, and other advantages from birth. On the other side, some people experience a painful and impoverished birth, making it difficult for them to live. As a result, there is a proverb that goes, “Cut your coat according to your cloth.” This means that one must learn to be content with what they have and live within their means. A person can make an honest effort to improve his or her financial situation and eventually come to be content with the way they peacefully manage their life.