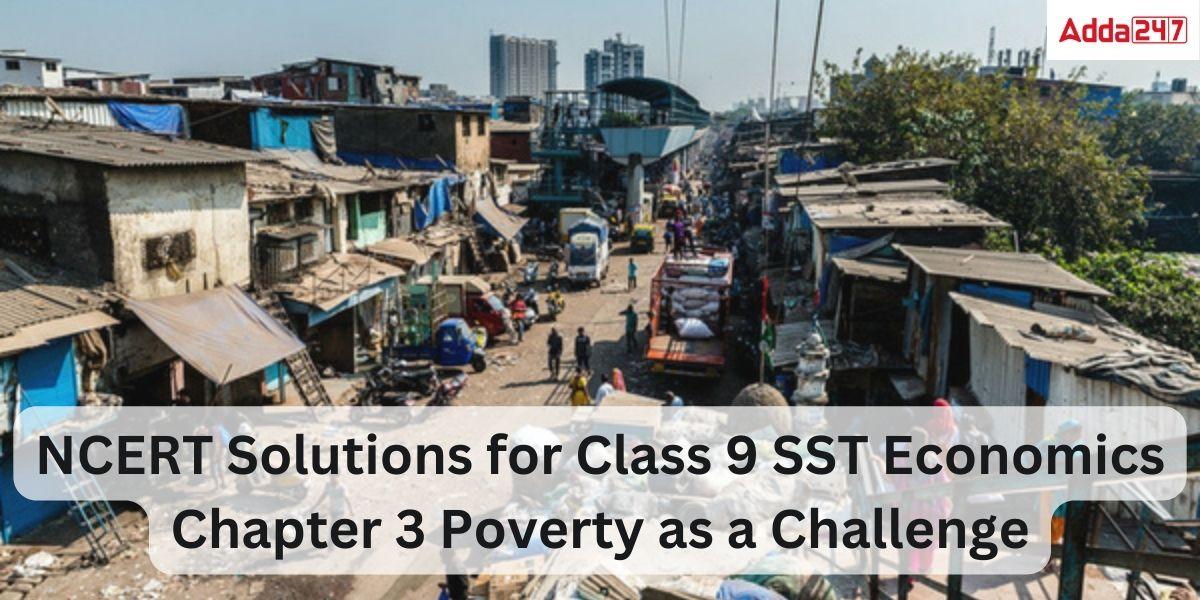 1. Describe how the poverty line is estimated in India.

Answer: Income or consumption levels are used as a base while measuring poverty in a certain area. When a person’s income or consumption is below a specified “minimum level” required to meet basic necessities, that person is said to be poor. A minimum level of food, clothing, footwear, fuel and light, educational and medical requirements, etc. are considered while calculating the poverty line in India. The figures used to calculate the poverty line change from year to year. As a result of the differences in work, lifestyle, and expenses between rural and urban areas, the poverty line for each is also different.

2. Do you think that the present methodology of poverty estimation is appropriate?

Answer: No, the present system of estimating poverty is inadequate because it only considers the most basic necessities, such as those for food, clothing, and fuel; it evaluates a minimal standard of living rather than a reasonable status of living. The definition of property has changed in recent years. Although people may be able to feed themselves and their children, they are nevertheless unable to access dignity, education, housing, health care, and job stability. Each nation chooses a fictitious boundary that is deemed appropriate for its current state of development and the acknowledged minimum amount of social norms. Thus  the present method of poverty estimation is not appropriate

3. Describe poverty trends in India since 1973.

Answer: India’s poverty rate has significantly decreased, going from roughly 55 percent in 1973 to 36 percent in 1993. To about 26% in 2000, the percentage of individuals living in poverty substantially decreased. According to the data, India’s poverty rate has decreased from 45 percent in 1993–1994 to 37.2 percent in 2004–2005. In 2011–12, there was a further drop, to 22%. In a few years, the percentage of individuals living in poverty might drop to under 20% if the current trend holds. Although the number of people living in poverty decreased in the first two decades (1973–1993), it was consistent at about 320 million for a considerable amount of time. According to the most recent estimates, there are now only roughly 260 million people who are considered to be poor. The information makes it quite evident that the relevant authorities must take action in order to rid India of poverty.

4. Discuss the major reasons for poverty in India.

Answer: The major reasons for widespread poverty in India are

5. Identify the social and economic groups which are most vulnerable to poverty in India.

Answer: Social and economic groups which are most vulnerable to poverty in India are:

6. Give an account of interstate disparities of poverty in India.

Answer:In India, not every state has the same percentage of the poor. Each state has a different poverty rate. The levels of poverty in states like Madhya Pradesh, Assam, Uttar Pradesh, Bihar, and Odisha were higher than the national average. The three poorest states in India are Orissa, Bihar, and Madhya Pradesh, with respective percentages of their populations living below the poverty line of 47, 42, and 37%. In Odisha, Madhya Pradesh, Bihar, and Uttar Pradesh, poverty rates are relatively high in both rural and urban areas. States like Tamil Nadu, Andhra Pradesh, Gujarat, Maharashtra, Haryana, Kerala, Punjab, and West Bengal, on the other hand, have seen a major drop in poverty. The three states in India with the lowest rates of poverty are Jammu and Kashmir, Punjab, and Himachal Pradesh.

Answer:The number of people in developing nations who live in extreme economic poverty, which the World Bank defines as having a daily income of less than  $1.90, has decreased from 28% in 1990 to 21% in 2001. Despite a significant decline in global poverty, there are still significant regional variations. Due to rapid economic development and significant investments in human resource development, poverty in China and other Southeast Asian nations has significantly decreased. In China, there were 212 million poor people in 2001 compared to 606 million in 1981. The reduction has not been as severe in South Asian nations like India, Pakistan, Sri Lanka, Nepal, Bangladesh, and Bhutan.

The number of the poor has decreased slightly from 475 million in 1981 to 428 million in 2001, despite the fact that the percentage of the poor has decreased. Indian estimates of poverty are also greater than those reported nationally because of differing definitions of the poverty line. In fact, the percentage of people living in poverty increased in Sub-Saharan Africa from 41% in 1981 to 46% in 2001.

Answer: One of the main goals of the Indian development plan has been the removal of poverty. The value of education is being emphasized across the country, which has led to an increase in literacy rates.  The government’s present anti-poverty strategy is mostly focused on two pillars:
(1) promotion of economic growth
(2) targeted anti-poverty programmes.
Prime Minister Rozgar Yojana, Swarnajayanti Gram Swarozgar Yojana, Pradhan Mantri Gramodaya Yojana, and the Mahatma Gandhi National Rural Employment Guarantee Act are a few of the government’s specific anti-poverty initiatives (PMRY)

(i) What do you understand by human poverty?

Answer: Human poverty is not merely a result of an one’s financial situation. Actually, the lack of political, social, and economic options that would allow a person to maintain a decent quality of living is referred to as human poverty. Human poverty is a result of a variety of factors, including caste and gender discrimination, illiteracy, a lack of employment opportunities, access to good healthcare and sanitation, and others.

(ii) Who are the poorest of the poor?

Answer: Women, children, and elderly members are therefore considered to be the poorest of the poor. In a poor household, these people suffer the most since they are routinely refused equal access to the resources available to the family.

(iii) What are the main features of the National Rural Employment Guarantee Act 2005?

Answer: The main features of the National Rural Employment Guarantee Act 2005 are

Q. What are the two methods of estimating the poverty line?
When a household’s income or consumption is below a certain minimal level, it is referred to as being below the poverty line. In India, this method is frequently used to evaluate poverty (BPL)

What are the two methods of estimating the poverty line?

When a household's income or consumption is below a certain minimal level, it is referred to as being below the poverty line. In India, this method is frequently used to evaluate poverty (BPL)

How can I access the online PDF version of the NCERT Solutions for Class 9 SST Economics Chapter 3 Poverty as a Challenge?

Ans. The NCERT Solutions for Class 9 SST Economics Chapter 3 Poverty as a Challenge PDF may be downloaded using the link in the article.

What are the advantages of using Adda247’s NCERT Solutions for Class 9 SST Economics Chapter 3 Poverty as a Challenge?

Ans. The advantages of using NCERT Solutions for Class 9 SST Economics Chapter 3 Poverty as a Challenge from Adda247 include the following:
The NCERT solution as well as a video explanation
Additionally, a PDF is included, which can be downloaded and saved for future use