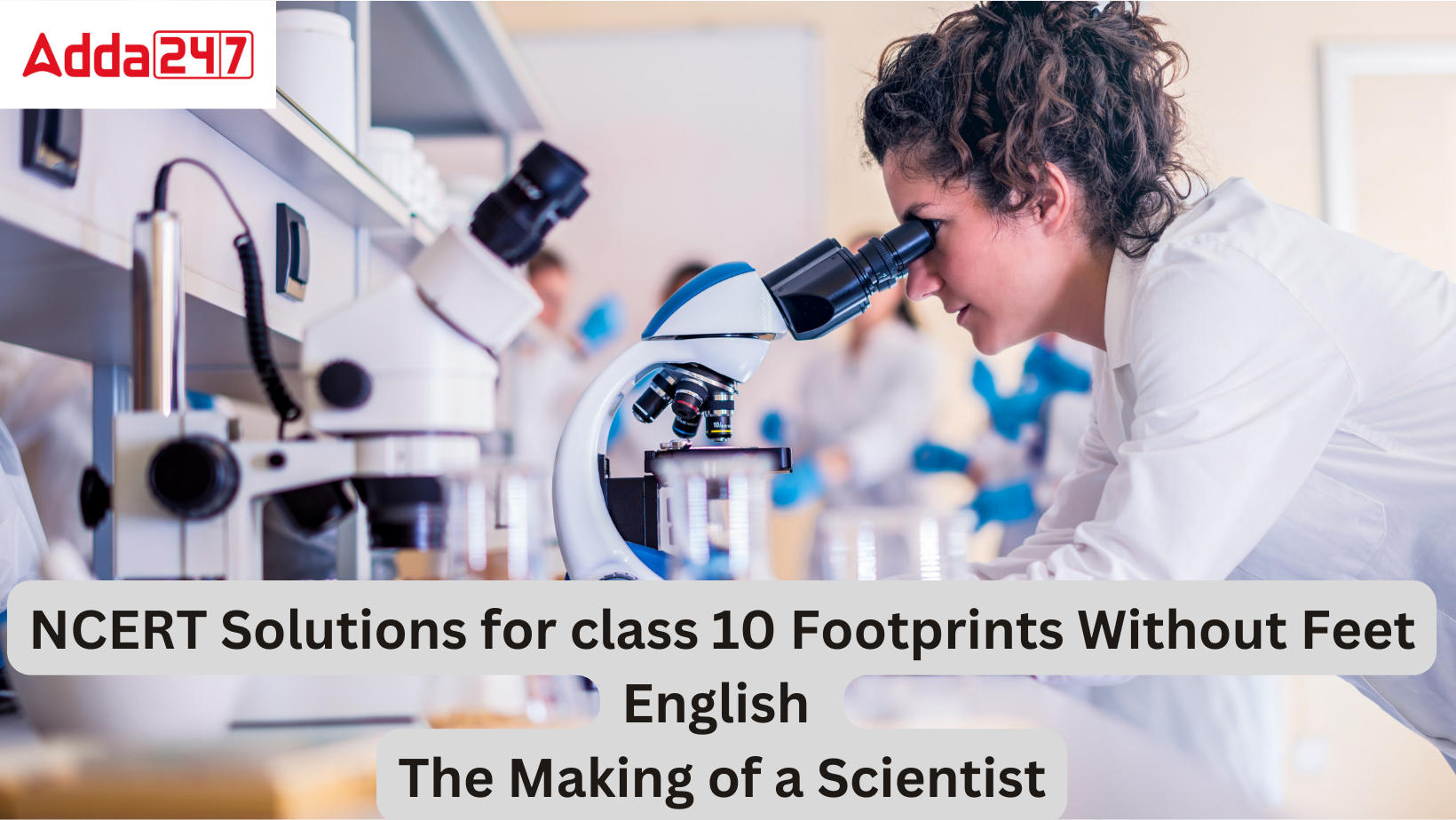 It tells the tale of an inquisitive youngster who is using his curiosity to train to become a scientist. Her mother was close to Richard Ebright, and she was instrumental in sparking his interest in science.

He started out by gathering butterflies. He later looked into the function of the gold patches on monarch butterfly pupae. He gained fame after his paper on the functioning of the cell was published in a scholarly magazine. Ebright took part in numerous scientific fairs and received numerous honours. He was interested in debate and public speaking in addition to science. He has a competitive spirit and a can-do attitude. He thus possesses all the necessary traits to succeed as a great scientist.

NCERT Solutions Class 10 Footprints Without Feet Chapter 6 The Making of a Scientist: PDF

Question 1: How did a book become a turning point in Richard Ebright’s life?

Answer: Richard Ebright was intensely fascinated with collecting various varieties of butterflies. Ebright had amassed all 25 species of butterflies he had discovered in and around his hometown by the time he was in the second grade. That most likely signalled the end of his butterfly collecting. The Travels of Monarch X, a children’s book that described how monarch butterflies moved to Central America, was then given to Richard by his mother, and it introduced him to the scientific world. After finishing the book, he became quite interested in following the butterfly’s migration. He worked on numerous more projects and tests using monarch butterflies as a result of his intense interest in them. Consequently, Richard Ebright’s life was significantly changed by the book, and he went on to become a renowned scientist.

Question 2:How did his mother help him?

Answer: Richard’s mother constantly supported him by piquing his curiosity about learning new things. She occasionally accompanied him on travels and purchased for him scientific tools including telescopes, microscopes, cameras, mounting materials, and other relevant equipment. She also tried to assist him in any way she could. She developed fresh learning activities for him to complete if he was idle. He received assistance from her in a variety of ways, both directly and indirectly. She even sent him “The Travels of Monarch X,” a book that had a profound impact on Richard’s life and inspired him to pursue a career in science.

Question 1: What lesson does Ebright learn when he does not win anything at a science fair?

Answer: Ebright presented slides of frog tissues, which he examined under a microscope, as his submission at a science fair. He received no reward for his performance. He was aware that conducting actual experiments, rather than just creating a visually appealing display, was necessary for him to succeed in a competition of this nature. After that, he began working on numerous projects and performing actual experiments.

Question 2: What experiments and projects does he then undertake?

Answer: Ebright carried out numerous initiatives and experiments. He looked for the root of a viral illness that kills almost all monarch caterpillars every few years for his eighth-grade assignment. He believed that a beetle might be the disease’s carrier. He began experimenting with the viceroy butterflies to demonstrate that they replicated monarch butterflies for his science fair project the next year. In addition, he investigated the monarch pupa’s colourful spots and discovered an unidentified insect hormone, which indirectly inspired his novel theory on how cells read DNA and function.

Question 3: What are the qualities that go into the making of a scientist?

Answer: A superior mind, curiosity, and the desire to give one’s all and succeed for the right reasons are the first three essential qualities, according to the author, that produce a scientist. Richard Ebright excelled in school and was a skilled debater, public speaker, canoeist, and outdoor enthusiast in general. He was a skilled photographer as well, specialising in nature and scientific displays. He possessed all the traits required to succeed as a scientist, including the competitiveness and curiosity that eventually led him to develop his theory regarding the existence of cells.

Question 1: How can one become a scientist, an economist, a historian…? Does it simply involve reading many books on the subject? Does it involve observing, thinking and doing experiments?

Answer: A small part of learning is reading books on a variety of topics. A student has to work on strengthening their capacity for thought and observation. A person needs to be inquisitive and eager to experiment in real life and work on related tasks in order to become brilliant in a particular sector. One must put forth a lot of effort and not let minor setbacks get to them. A person needs to put in a lot of sweat and effort in any particular area of interest if they have the urge to learn and discover a new theory.

Question 2: You must have read about cells and DNA in your science books. Discuss Richard Ebright’s work in the light of what you have studied. If you get an opportunity to work like Richard Ebright on projects and experiments, which field would you like to work on and why?

Answer: The works of Richard Ebright were in the fields of biochemistry and molecular biology. The scientific community has benefited from the study of cell structure, growth, and functions in various creatures thanks to his theory on the life of cells. Indirectly, it aids in the identification of pathogen-causing organisms and the understanding of how they develop inside the bodies of living things. Ebright’s discoveries on insect hormones and the images provided him with the solution to one of biology’s mysteries: how the cell could “read” its DNA’s blueprint. DNA is the material found in a cell’s nucleus that regulates heredity and transmits genetic information from one generation to the next. It establishes the cell’s shape and purpose.

If I had the chance to work on projects and experiments like Richard Ebright did, I would like to research numerous life-threatening disorders. By researching the DNA, I might discover effective treatments for fatal or protracted disorders.

Question 1: Children everywhere wonder about the world around them. The questions they ask are the beginning of scientific inquiry. Given below are some questions that children in India have asked Professor Yash Pal and Dr Rahul Pal as reported in their book, Discovered Questions (NCERT, 2006).

(i) What is DNA fingerprinting? What are its uses?

(ii) How do honeybees identify their own honeycombs?

(iii) Why does rain fall in drops?

Can you answer these questions? You will find Professor Yash Pal’s and Dr Rahul Pal’s answers (as given in Discovered Questions) on page 75.

Question 2: You also must have wondered about certain things around you. Share these questions with your class, and try and answer them.

Answer: Here are some of the interesting questions that can be discussed among students for discussion in class:

(Note: Students can think of a few questions as per their own understanding and discuss them among themselves.)

NCERT Solutions Class 10 Footprints Without Feet Chapter 6 The Making of a Scientist: FAQs