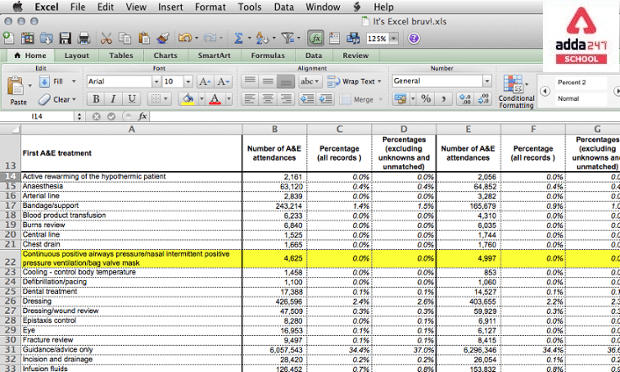 Read About PAN Card In India

There are 484 functions in Excel 2016, with 360 of the existing previous to Excel 2010. These functions are divided into 14 groups by Microsoft. 386 of the 484 existing functions can be invoked from VBA as methods of the object “WorksheetFunction,” and 44 have names that are the same as VBA functions.

Read About CBSE Question Bank for Class 10 and 12

Excel has supported end-user macro programming (automation of repetitive activities) and user-defined functions (extensions of Excel’s built-in function library) since its initial release. These programmes were created in a macro language with formula syntax that resided in the cells of special-purpose macro sheets in earlier versions of Excel. Excel’s default macro language until Excel 4.0 was XLM. Excel started recording macros in VBA by default with version 5.0, however, XLM recording was still available as an option. That option was removed in version 5.0. An XLM macro can be run in any version of Excel, including Excel 2010, but Microsoft discourages use.

The essence of Excel remains the same as in the original spreadsheet software, VisiCalc: the application shows cells grouped in rows and columns, each cell may contain data or a formula, and each cell may have relative or absolute references to other cells.

Excel 2.0 for Windows, which was based on its Mac GUI-based cousin, grew the installed base of the then-nascent Windows environment in an indirect way. Excel 2.0 was published a month before Windows 2.0, and Microsoft had to bundle a runtime version of Windows 1.0 with Excel 2.0 due to the tiny installed base of Windows at the time.

Excel was the first spreadsheet to allow users to customise the look of their spreadsheets (fonts, character attributes, and cell appearance). It also introduced intelligent cell re-computation, which updates only cells that are dependent on the modified cell (previous spreadsheet programmes recomputed everything all the time or waited for a specific user command). Excel introduced auto-fill, which allows you to drag and expand the selection box to replicate the contents of a cell or row to adjacent cells or rows, intelligently modifying the copies by incrementing cell references or contents. Excel also came with a lot of graphing features.

It’s impossible to deny that shortcuts make our life easier. While using Microsoft Excel, you will discover about the wide range of Excel shortcuts available, and it’s always handy to have a list on hand.

Moreover, for beginners to become very proficient in financial analysis, they must first master the basic Excel formulas. Microsoft Excel is widely regarded as the industry standard in data analysis software. In terms of data processing, financial modelling, and presentation, Microsoft’s spreadsheet tool is one of the most popular among investment bankers and financial analysts.

What is the purpose of Microsoft Excel?

Excel is commonly used for data organisation and financial analysis. It is utilised in all business functions and by businesses of all sizes.

What are the three most prevalent Excel applications?

Budgeting, creating graphs and charts, and storing and categorising data are the three most popular general purposes for spreadsheet software.

What are the benefits of Excel?

In MS Excel, how many different forms of alignment can you see?

Left, right, centre, and justified are the four primary alignments.

What makes Excel so popular?

Excel features an auto-fill feature that allows users to intelligently fill cells and rows, as well as drag and enlarge the selection box.