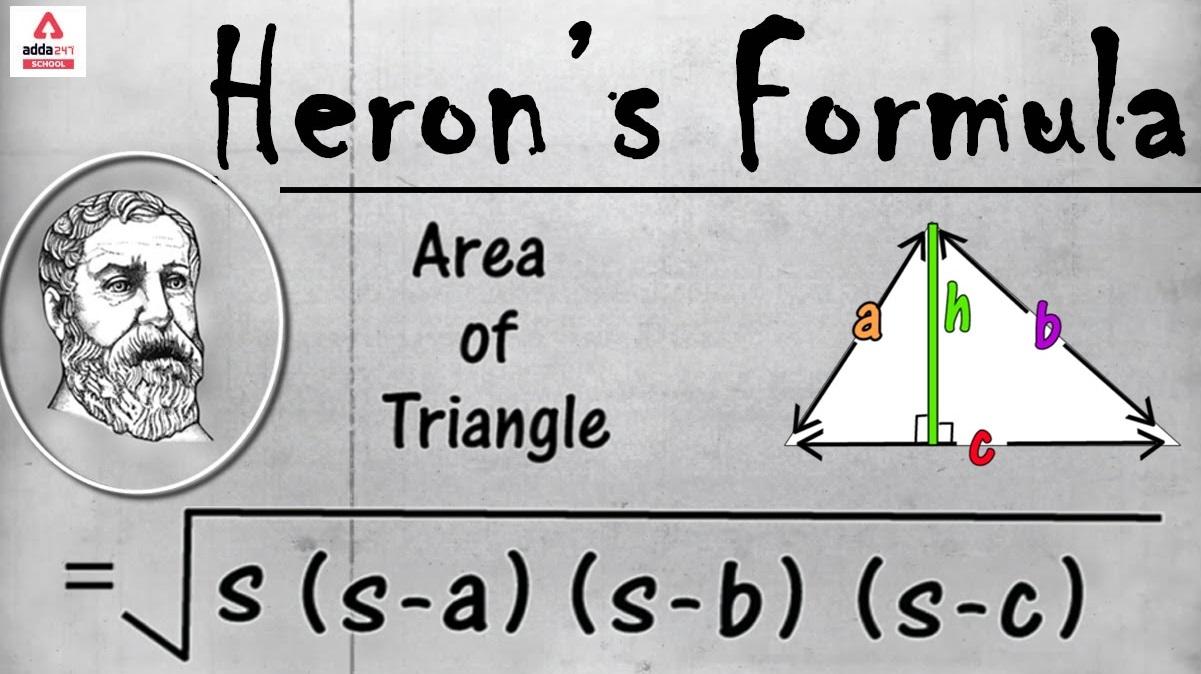 Heron of Alexandria, also known as Hero, was a Greek geometer and inventor who lived around AD 62 in Alexandria, Egypt, and whose writings preserved knowledge of Babylonian, Egyptian, and Greco-Roman mathematics and engineering for posterity.

Heron’s Formula for Area of Triangle

Metrica, Heron’s most important geometric work, was not discovered until 1896. It’s a three-volume compilation of geometric principles and formulas on areas and volumes of flat and solid forms that Heron compiled from a range of sources, some of which date back to ancient Babylon. The methods for calculating the area of various plane figures and the surface areas of common solids are listed in Volume I. A derivation of Heron’s (really, Archimedes’) formula for the area A of a triangle is included.

where a, b, and c are the lengths of the sides of the triangle, and s is one-half the triangle’s perimeter or

Heron’s formula (also known as Hero’s formula) gives the area of a triangle given the lengths of all three sides are known in geometry. It is named after Hero of Alexandria, who is the person to find the formula. Unlike previous triangle area formulas, no angles or other distances in the triangle must be calculated first.

Heron of Alexandria penned Heron’s formula about 60 CE. He was a Greek engineer and mathematician who calculated the area of a triangle using only the lengths of its sides and went on to calculate the areas of quadrilaterals using the same method. This formula was used to prove trigonometric laws such as the Laws of Cosines and the Laws of Cotangents.

According to the Heron, the formula may be used to compute the area of any triangle, whether it is isosceles, equilateral, or scalene, given the sides of the triangle. Consider the triangle ABC, which has sides a, b, and c, respectively.

Ques. What is Heron’s formula?

Ans. Given the lengths of each side, Heron’s formula calculates the area of a triangle. A direct application of Heron’s formula may not be accurate if you have a very narrow triangle with two sides that are about equal and the third side is substantially shorter.

Ques. What is the formula of Semi perimeter?
Ans. The area of a scalene triangle is calculated using this formula. S (Semi perimeter) = (a + b + c)/2, where a, b, and c are the side lengths.

Ques. Can Heron’s formula be used for all triangles?

Ans. The Heron’s formula for the area of a triangle is applicable for all triangles and can be used to find the area of any triangle no matter whatever are the side lengths of the triangle.

Ans. Heron of Alexandria, also known as Hero, was a Greek geometer and inventor who lived around AD 62 in Alexandria, Egypt, and whose writings preserved knowledge of Babylonian, Egyptian, and Greco-Roman mathematics and engineering for posterity. Metrica, Heron’s most important geometric work, was not discovered until 1896.