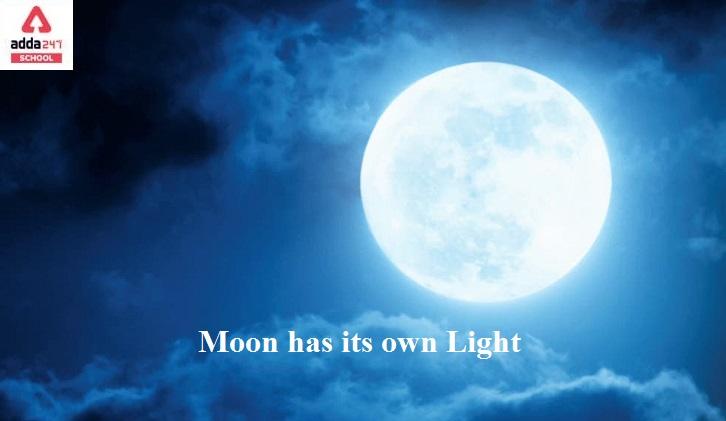 Does Moon has its own light?– The majority of Moonlight has reflected sunlight from portions of the Moon’s surface where the Sun’s light strikes.

The brightness of moonlight varies widely depending on the lunar phase, yet even the full Moon only delivers about 0.05–0.1 lux illumination. The illuminance of a Full Moon near perigee viewed from the tropics around the upper culmination can reach 0.32 lux.

Due to the Purkinje effect, moonlight appears bluish to the human eye when contrasted to most artificial light sources, especially around the full moon.

The bond albedo of the Moon is 0.12, which means that just 12% of incident sunlight is reflected by the lunar surface. It takes around 1.26 seconds for moonlight to reach Earth’s surface. Moonlight, which is scattered throughout the Earth’s atmosphere, brightens the night sky by diminishing the contrast between lesser stars and the background. As a result, many astronomers avoid observing sessions during the full moon.
Read About: Greenpeace Moment

Does Moon has its own light: How are Moonbows and Moondogs created

There are two phenomena related to moonlight:

Read about: Folk dance of India

Moon has its own light: Mythologies

Moonlight is said to have a negative effect in mythologies. Sleeping in the light of a full Moon, for example, was thought to turn a person into a werewolf on certain nights. The Moon’s light was supposed to aggravate the symptoms of lunatics, and sleeping under moonlight could render one blind or insane. Sleeping in moonlight in the tropics was considered to cause night blindness due to a lack of vitamin A.

Equine recurrent uveitis is known as “Moon blindness.” The reason is no longer assumed to be moonlight.

What kind of light does the moon emit?

The Sun provides light to the Moon. The Moon reflects the Sun’s light, making it appear bright in our sky in the same manner that the Sun does.

Why isn’t the Moon a source of light?

Because it does not emit its own light, the moon is not a light source. The sun’s light is reflected by the moon. The Moon is visible because light from the Sun reflects off of it and returns to the Earth.

What causes moonlight to be white?

The Moon has to compete with sunlight during the day, which is also scattered by the atmosphere, giving it a white appearance.

Is lava present on the moon?

The Moon has been volcanically active for most of its history, with the first eruptions occurring approximately 4.2 billion years ago. Even though a large amount of magma may remain beneath the lunar surface, there are no active volcanoes on the Moon today.

Is the moon WHITE or GREY?

The Moon appears white and grey when viewed from Earth.