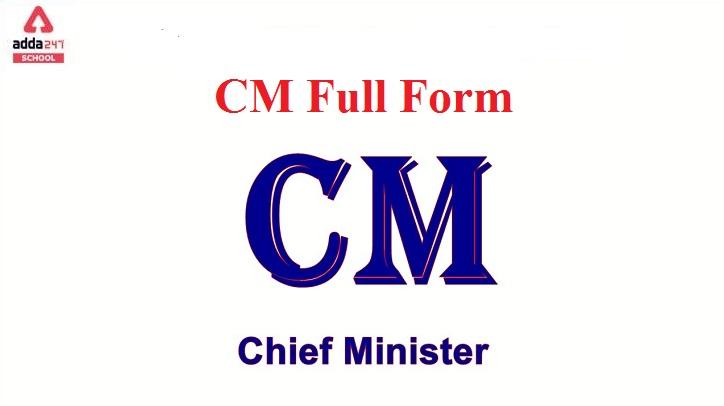 CM Full Form: Some abbreviations have quite a large number of terms that can be used in their full forms. These full forms, however, vary from field to field. Likewise, there are various full forms of CM. Let’s know about these different full forms and where they are used.

A chief minister is a sub-national entity’s elected or appointed head of government. It’s also the English equivalent of the title given to the leaders of government in Malay states that aren’t monarchies.
The post has a Westminster setting, where a constitutional head of state (sub-national) is advised by ministers who often lead executive government ministries. They are the chief adviser to the nominal head of state, the chair of the cabinet, and the legislative leader of the main ruling political party.
A chief minister is the elected head of government of each state (at times, even of a union territory in India). The Governor is a state’s leader, according to the Indian Constitution, however, the chief minister has de facto executive control.
Following a state’s State Legislative Assembly election, the governor of that state normally invites the party (or coalition) with the most seats to form the government. The governor appoints and swears in the chief minister, who is accountable to the assembly through his Council of Ministers.The chief minister’s term can continue up to five years if he maintains the confidence of the legislature. The number of terms that a chief minister can serve is unrestricted. A state government’s council of ministers is led by a chief minister, who can be deputised by a deputy chief minister. The chief minister usually appoints the State Chief Secretary and can assign departments to his state’s Cabinet Ministers and Ministers of State as he sees fit. He also gives the Chief Secretary authority to transfer, suspend, or promote state officers.
Read About: EMI Full Form

The Chessmaster series is a chess-playing computer game. With over five million units sold as of 2002, it is the best-selling chess series in history.

The abbreviation CM stands for common metre or common measure. It’s a poetry metre made up of four lines that alternate between iambic tetrameter and iambic trimeter, with each foot consisting of an unstressed and a stressed syllable.

Configuration management (CM) is a systems engineering technique for aligning a product’s performance, functional, and physical features with its requirements, design, and operational information throughout its life cycle. Military engineering organisations employ the CM process to manage changes throughout the lifecycle of complex systems like weapon systems, military vehicles, and information systems.

The use of the three-term contingency, which employs stimulus control and consequences to influence behaviour, is known as contingency management, or CM.

Curium is a transuranic radioactive chemical element with the atomic number 96. It is sometimes abbreviated as Cm. Marie and Pierre Curie were the names given to this element. Glenn T. Seaborg’s group at the University of California, Berkeley, was the first to purposefully create and identify curium in 1944. The discovery was maintained a secret until November 1947, when it was made public. The majority of curium is created in nuclear reactors by hitting uranium or plutonium with neutrons.

Full-Form of CM: For Measurements

A centimorgan is a unit of measurement for genetic linkage in genetics. It’s the distance between chromosome sites where the estimated average number of chromosomal crossovers in a single generation is 0.01. It’s frequently used to calculate the length of a chromosome. It isn’t a true physical separation.

In the metric system, a centimetre or centimetre is a unit of length. One-hundredth of a metre is equivalent to one centimetre.

Construction morphology is a morphological theory aiming at improving word grammar understanding. The relationship between syntax, morphology, and the lexicon is also discussed. Geert Booij first presented it in the 2000s.

Condition monitoring, often abbreviated as CM, is the process of continuously monitoring a machine’s condition parameter. It is carried out in order to detect a substantial change that could indicate the onset of a defect. It’s an important part of preventative maintenance. The use of condition monitoring enables the scheduling of maintenance or other activities to be conducted to avoid significant damages and their effects.

What is the full form of CM in government?

CM stands for Chief Minister of a state.

What is the full form of CM in units of measurement?

A Centimeter is a unit of measurement, often abbreviated as CM.

What is the full form of DM?

What is the full form of IPS?

What is the full form of SDM?

A Sub-Divisional Magistrate is often abbreviated as SDM.

What is the full form of CM in government?

CM stands for Chief Minister of a state.

What is the full form of CM in units of measurement?

A centimetre is a unit of measurement, often abbreviated as CM.

What is the full form of DM?

What is the full form of IPS?

What is the full form of SDM?

A Sub-Divisional Magistrate is often abbreviated as SDM.