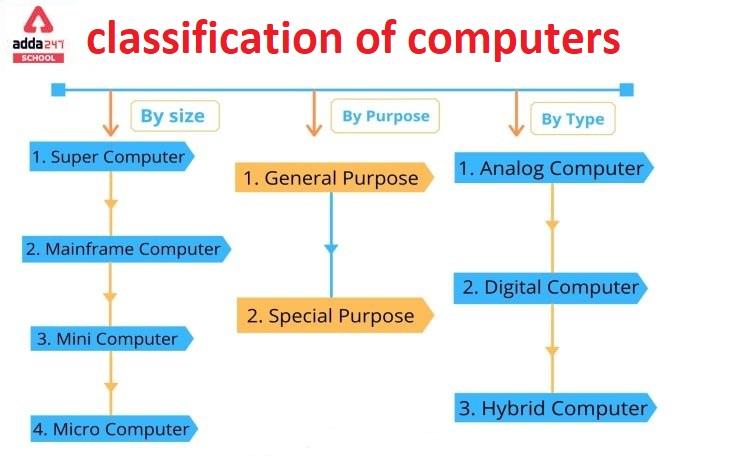 A computer is a machine that may be configured to automatically perform arithmetic or logical functions. Modern computers can even conduct programmes, which are generic sets of procedures that allow computers to accomplish a wide range of activities. A computer system is a “full” computer that comprises the hardware, operating system, and peripheral equipment required for “full” functioning.
Computers are used as control systems in a wide range of industrial and consumer products, including simple special-purpose devices such as microwave ovens and remote controls, as well as factory devices such as industrial robots and computer-aided design, as well as general-purpose devices such as personal computers and mobile devices such as smartphones. The Internet is powered by computers, which connect billions of other computers and people.

Classification of Computers by Size

Classification of Computers by Purpose

Classification of Computers by Type

Classification of computers by usage

Classification of Computers according to Functionality

Early computers were solely supposed to be used for computations, and certain mechanical devices were built to automate long, boring jobs early in the Industrial Revolution. Furthermore, in the early twentieth century, complex electrical machines performed specialised analogue calculations, and the first digital electronic calculating machines were constructed during World War II. Since then, computer speed, power, and versatility have increased considerably, with transistor counts increasing at a rapid rate.
A modern computer typically consists of at least one processing element and some type of computer memory, with the processing element performing arithmetic and logical operations and a sequencing and control unit changing the sequence of operations in response to stored data. Input and output devices, as well as devices that fulfill both roles, are peripheral devices that allow information to be retrieved from an external source and enable the outcome of operations.

Classification of Computers, By Size, Usage, Type & Purpose All Facts

One of the most commonly used methods of classifying computers is based on size. The size of computers can range from small handheld devices to large mainframe computers. The smallest category of computers is known as handheld computers or personal digital assistants (PDAs). These devices are small enough to fit in the palm of your hand and are typically used for personal tasks such as scheduling, note-taking, and internet browsing. Laptops and tablets are also considered small computers, and they are more powerful than handheld devices.

What exactly do you mean when you say classification?

Classification is the act or process of classifying.

What are the different types of computer classifications?

Microcomputers, Minicomputers, Mainframe computers, and Supercomputers are the classifications based on capability.

What is the difference between classification and types?

Classification is a division or category in a system that organises or categorises objects.

What are the different classifications for computers?

They're divided into categories based on their intended use, data management, and functionality.

What is the purpose of classification?

We can better understand diversity by classifying it.