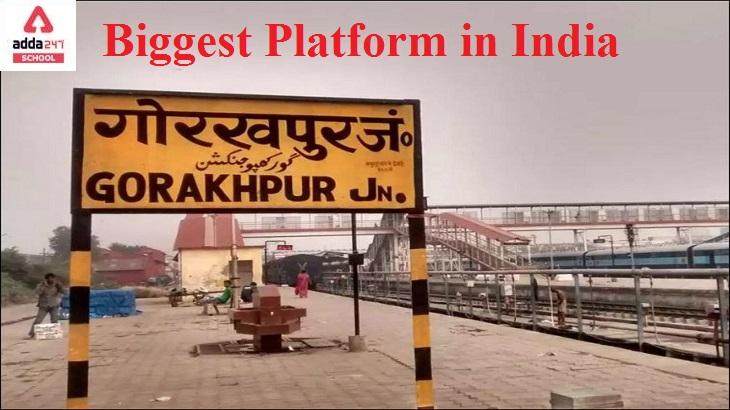 Biggest Platform in India: India has one of the greatest railway networks in the world, but it is only one aspect of the country’s world-class transportation infrastructure. For many Indians and tourists, the complicated network of communication it provides across a vast and densely populated country, along with an outstanding regularity of trains to the most remote locations, makes it a very accessible mode of transportation. Add in the fact that it’s almost 170 years old, and it’s easy to see why so many people still trust this low-cost form of transportation so many years later.

Gorakhpur Junction railway station is in the Indian state of Uttar Pradesh, in the city of Gorakhpur. It boasts the second-longest train platform in the world. The North Eastern Railway’s headquarters are located here. The station is classified as a Class A-1 railway station.

The Gorakhpur railway station was undergoing renovations in 2009. The remodelling project was finished on a war footing and on time. Gorakhpur now has a platform measuring 4,482.7 feet with the ramp and 4,446.9 feet without it, thanks to the inauguration of the renovated yard on October 6, 2013. Gorakhpur now boasts the world’s longest train platform, extending 1,366 metres.
Read About: Capital of Australia

The Biggest platform in India: History

Read About: What is the Highest Peak of Eastern Ghats

Which is the biggest platform in India?

Gorakhpur is one of Indian Railways’ top hundred booking stations. On a daily basis, it handles about 190 trains, with the capacity to handle up to 473 trains on exceptional occasions. Kanpur Central, Varanasi Junction, Mathura Junction, and Mughalsarai are some of the major railway stations in Uttar Pradesh that handle considerable amounts of passengers.
Read About: LASER

Other 2nd and 3rd Largest platforms of India

FAQs on Biggest Platform in India

Which is India’s largest platform?

What is the world’s largest railway platform?

Hubballi Junction in Karnataka will be home to the world’s longest railway platform. The Gorakhpur Railway platform now retains the record.

In India, what is the tiniest platform name?

In the Indian state of Odisha, Ib is a railway station. It holds the distinction of having the shortest name of all Indian Railways stations.

In India, which train is the fastest?

The Vande Bharat Express is India’s fastest train, reaching a top speed of 180 km/h on a test run.

Which of India’s tunnels is the longest?

The Pir Panjal Railway Tunnel in Jammu and Kashmir is India’s longest tunnel.