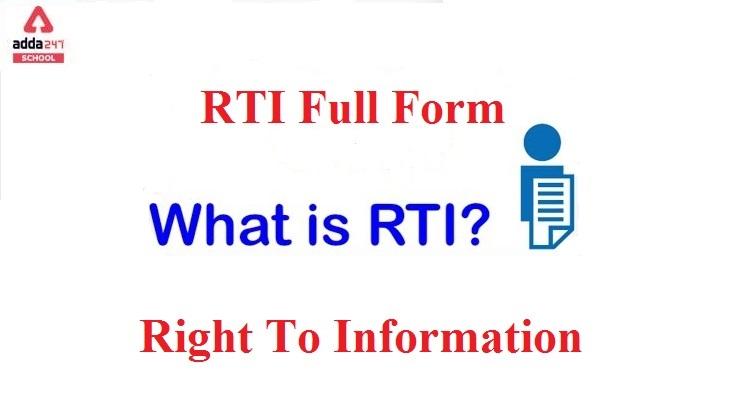 RTI Full-Form – Right to Information: The full form of RTI, the abbreviation, stands for Right To Information. The Right to Information Act (RTI) is an Indian law that establishes the rules and procedures for citizens’ access to information. Any citizen of India may request information from a “public authority” under the RTI Act, which is expected to respond promptly or within thirty days. The information must be delivered within 48 hours if the matter involves a petitioner’s life or liberty. Every public entity is also required by the Act to computerise their records for wide dissemination and to proactively disseminate certain categories of information so that citizens only need to make formal requests for information.

The RTI Bill was passed by India’s Parliament on June 15, 2005, and went into effect on October 12, 2005. On average, approximately 4800 RTI applications are filed each day. Over 17,500,000 applications were filed in the first ten years after the act was enacted.

In public agencies, the Public Information Officer or the First Appellate Authority decides on applications and appeals in a quasi-judicial capacity. This legislation was passed to strengthen the fundamental right of ‘freedom of speech’ guaranteed by the Indian constitution. RTI is an implied fundamental right because it is enshrined in Article 19 of the Indian Constitution, which guarantees freedom of speech and expression.
Read About: NGO Full Form

Scholars believe that the fundamental goal of the Right to Information Act, to make government transparent and accountable, is eroding as RTI requests are denied and bureaucratic systems are clogged with millions of requests.

Many RTIs are turned down because the filing requirements are too burdensome and legalistic for average persons. Many RTI applications to Delhi’s Information Commissioners are denied for a variety of reasons, including that they are not typed or written in English, or that they lack an index of the papers attached or a list of dates. Many citizens are forced to seek the assistance of NGOs, RTI activists, or lawyers in order to file their RTIs.
Read About: PCS Full Form

What exactly do you mean when you say RTI?

The Right to Information Act, or RTI, is a groundbreaking law in India that strives to increase transparency in government organisations.

What are the RTI rules?

An application can be submitted once payment has been made. According to the RTI Rules of 2012, any citizen who is below the poverty level is not required to pay an RTI fee. However, along with the application, the applicant must include a copy of the certificate issued by the competent authorities in this respect.

What is the RTI fee?

The charge for requesting information from the CPIO of Central public authorities via an RTI application is currently Rs. 10/-.

Who gave India the Right to Information Act (RTI)?

What are the advantages of RTI?

It makes it an obligation of public authorities to keep documents accessible to the public and to publish the names of the specific officers who should provide information and in reference to the framing of rules, regulations, and other rules and regulations within 120 days.