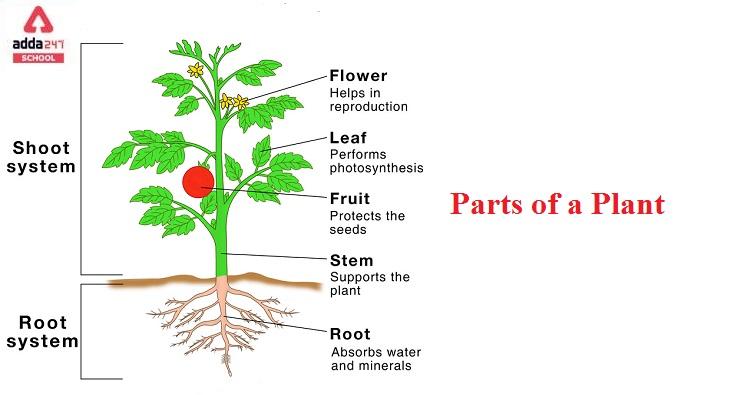 Parts of plants For Kids

We all come into contact with plants in our daily lives. Plants are the most important and vital elements of our environment. Plants, like people, are living entities that need food, water, and sunlight to survive. Furthermore, they, like humans, age and die, are made up of cells, and, most significantly, are similarly reactive.

Food, medicine, shelter, and the oxygen humans need to breathe are all provided by plants. In fact, plants are the source of everything we eat, whether directly or indirectly. Plants are essential for the survival of both herbivores and omnivores. Even carnivores rely on plants since they frequently feed on plant-eating animals. Many animals rely on plants for refuge and habitat. Plants are also necessary for our precious soil. When plants die, they decompose, providing nutrient-rich topsoil that aids seed germination and growth into seedlings. Plants also help to reduce erosion by holding soil in place with their roots. Photosynthesis is the process through which plants absorb carbon dioxide from the environment and release oxygen for us to breathe.

Read About: Rotation of Earth

Parts of a Plants Drawing Diagram on Chart

Their physical structure, like that of humans, is made up of several components. Each of the components serves a distinct purpose. A plant would not be able to live without such components.

Roots hold plants in place in the soil and absorb nutrients and water for the remainder of the plant. The roots are the most vital element of a plant since they are responsible for supplying the plant with the nutrients it requires. They’re the ones in charge of transporting water and minerals to the plants. Aside from that, they are a plant’s active support system, without which the plant would be unable to adhere to the soil. They are also in charge of storing food for the plants for later use.

In dicots, direct radicle extension results in the production of main roots that grow inside the soil. It has secondary and tertiary roots, which are lateral roots.

Because the primary root is short-lived in monocots, it is replaced by a vast number of roots. The roots of some plants, such as the Banyan tree, grow from the plant’s sections rather than the radical. Adventitious roots are the name given to such roots.

A few swamp plants have roots that shoot vertically upwards to obtain oxygen for respiration. Pneumatophores are the name for such roots.

The plant’s stem is the section of the plant that is above ground. The bark of trees is brown, and the stems of younger trees are green. It bears leaves, fruits, and flowers and is the foundation of the shoot system.

Stems sustain the plant’s top section and serve as a conduit for nutrients, water, sugar, and carbohydrates. Their primary job is to act as delivery agents for nutrients and water stored in the roots, transporting them in the form of glucose to other plant components. Some plants, such as cactus, celery, asparagus, and bananas, can undergo photosynthesis in their stems. Food is also transferred from the leaves to other regions of the plant via stems.

Leaves are an essential part of a plant since they store all of the necessary food for the plant. A unique feature of leaves is that they are meant to aid in the process of photosynthesis, which aids in the production of food in the leaves.

Aside from photosynthesis, leaves are essential for the drainage of excess water from plants via microscopic pores known as stomata. The process of transpiration is this.

Flowers are a plant’s reproductive organ. To attract pollinators such as birds, bees, and other insects, they generally feature spectacular petals and perfumes. Petals, stamen (anther and filament), pistil (stigma, style, and ovary), and sepals are the four primary components of most flowers. Flowers generate seeds in their ovary after they have been pollinated and fertilised.

Fruits are the byproducts of plant reproduction. The seed, which is the most important component for reproduction, is contained in the fruit. As a result, they operate as a seed-protecting covering.

Seeds are made up of plant material that can grow into a new plant. An embryo is a name given to this plant substance. Seeds have one or two cotyledons and are protected by a seed coat. Cotyledons are the young plant’s food until it can make its own food from light, and they are often the plant’s first embryonic leaves.

Parts of a Plants Drawing, Diagram, Chart for Kids- FAQs

What are the basic parts of a plant?

Roots, stems, leaves, flowers, fruits, and seeds are the most basic elements of most plants.

What are the two most important elements of a plant?

The shoot and root systems are the two essential elements of a plant.

What are the different parts of a flower?

What is a plant’s basic structure?

A root system, a stem or trunk, branches, leaves, and reproductive organs are all present in plants.

What is the total number of components in a leaf?

Leaf base, petiole, and lamina are the three sections of a plant leaf. Hypopodium is another name for the leaf base.