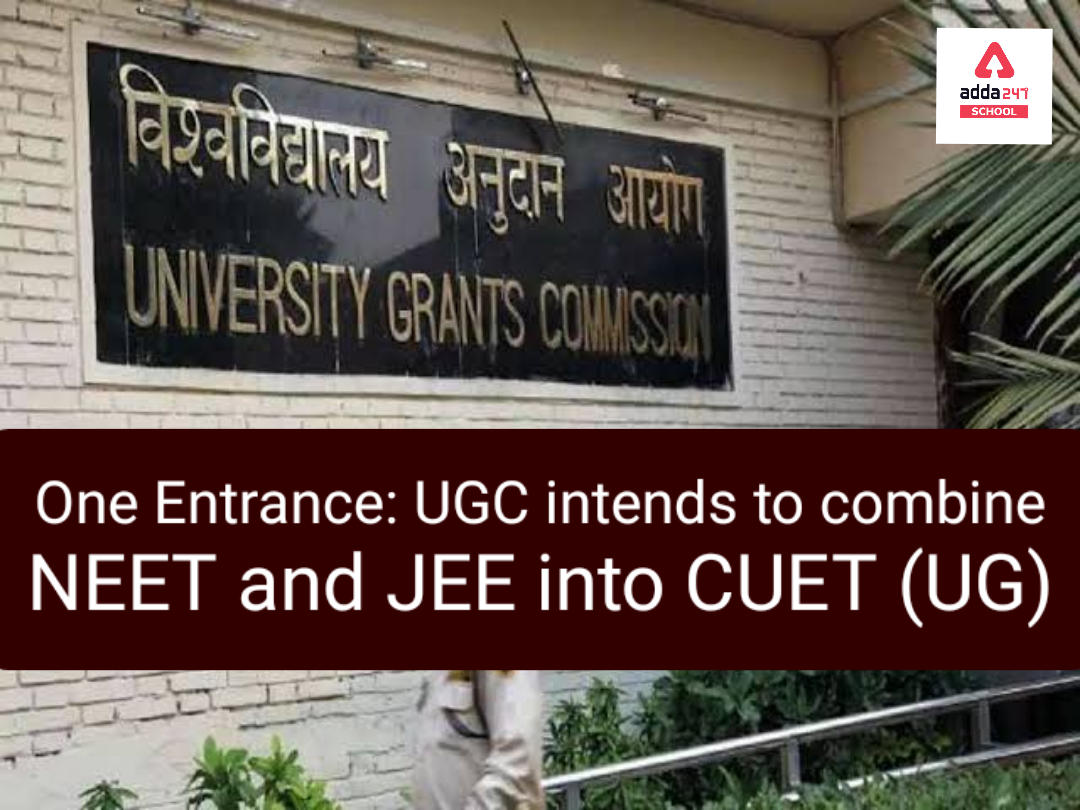 One Nation One Examination

One Nation One Examination: The University Grants Commission (UGC)  is planning to conduct the engineering and medical entrances in the country under one umbrella of the Common University Entrance Test-Undergraduate (CUET-UG). Students who are preparing for multiple entrance examinations may get a breather. In a recent interview, The chairman of UGC  M Jagadesh Kumar told The Times of India that UGC is working on a plan to conduct multiple entrance examinations into one single Examination which is CUET-UG. Students may follow adda247school for future updates regarding CUET and Various education News.

One Nation One Examination- NEET JEE Merge: As per an article published in The Times of India, In accordance with the new plan, students would take just one entrance exam rather than separate ones for math, physics, chemistry, and biology. Based on the results, the students can choose the stream they want to study in.

In a recent interview with The Times of India, The chairman of UGC  M Jagadesh Kumar told that the higher education regulatory body of India, The University Grants Commission (UGC) is working on a proposal to bring multiple entrance tests into The Common University Entrance Test-Undergraduate (CUET-UG). Mr, Kumar added that The fundamental goal is to replace three exams that are all based on the same body of information with one exam. The pupils would have the opportunity to be admitted to a variety of areas.

According to Kumar, UGC will take this initiative to alleviate students’ additional burden associated with taking numerous entrance exams. Additionally, a single exam can assess all of their subject knowledge at once. As a result, under the new plan, students who are interested in pursuing engineering and medical courses will be evaluated in the required topics, namely Physics, Chemistry, Mathematics, and Biology. There is an opportunity to enroll in additional CUET-UG courses that will be available to those who don’t want to pursue engineering and medical courses.

The three major entrance tests in India, which are taken by almost 43 lakh Aspirants, are the engineering entrance “Joint Entrance Examination (Main),” the medical entrance “National Eligibility cum Entrance Test Undergraduate,” and now CUET-UG.
Most students show up for at least two of these tests, if not all of them. For the JEE (Mains) exam, candidates must take physics, chemistry, and mathematics, while biology is substituted for mathematics in the NEET-UG exam.
These topics are included in the 61 domain subjects for the CUET-UG.
The main motive to bring this plan is to minimize the stress and burden of the student due to logistics and other factors.

One Nation One Examination: CUET-UG

The chairman of UGC M Jagadesh Kumar said “The proposal is, can we integrate all these entrance examinations so that our students are not subjected to multiple entrance examinations based on the same knowledge base? The students should have one single entrance examination, but multiple opportunities to apply among the disciplines,” .
He also added that “Typically, what are the programmes that are available? Some students may like to go into medicine or engineering. If they don’t get into either, many will in the general education. So is it possible to have only one CUET for all disciplines? The students who would like to go into engineering their marks in mathematics, physics, chemistry can be used as a ranking list and similarly for medicine. If they don’t get into medicine or engineering, under CUET they will still have the opportunity to join different programmes using the same marks of eithe mathematics, physics, chemistry, biology and so on. So therefore, by writing once, in these four subjects, students can try for different opportunities.”
“The other aspect is the logistics of arranging the computing facilities in so many centres. In some cases, as you have seen in CUET-UG, students are not given their first preference so they have to travel a slightly longer distance instead of writing in their own city. If you minimise the number of tests, then there is a possibility that from a logistics point of view for NTA, it will become much easier. And also for question papers, we have to do separate sets for JEE, NEET and CUET. Now we can have only one set of question papers for all these subjects,” said Kumar.

The Entrance test will be held twice in a year . “The first one can happen after the Board exams
and another one in December,” added Kumar.

On account of the pen-paper NEET-UG , Kumar said: “The future is computer-based multi choice question-type tests because OMR based tests still have some challenges in terms of the accuracy of the evaluation.”

One Nation One Examination: Overview

The National Testing Agency conducted the Central Universities Entrance Test for various Undergraduate courses every year. Students can get admission to various universities all over India and pursue their courses. List of universities participating in the CUET

One Nation One Examination: Exam Pattern

One Nation One Examination- NEET JEE Merge into CUET: FAQs

Q. When will UGC conduct CUET-UG for NEET and JEE Entrance?

The University Grants Commission does not announce the exact date. The proposal of combining Both NEET &JEE into CUET UG is in the initial stage. Students may follow this page for further updates.

Q. Which Examination body conducts the National Eligibility and Entrance Test for Medical?

The NEET or National Eligibility and Entrance Test for medical are conducted by National Testing Agency (NTA) every year.