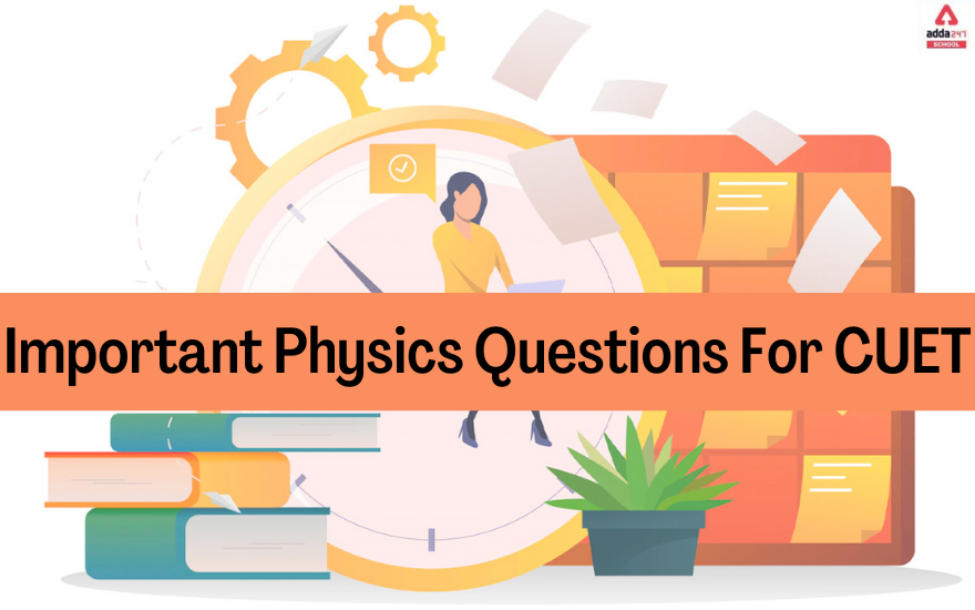 Important Physics Questions for CUET: Section II of the CUET exam is the domain-specific subject section. This section is very vast and includes the subject of physics and today we are going to cover this subject in today’s article. We will provide you with a list of physics important questions from CUET’s point of view. Check here some Physics asked important question in CUET 2022 exam.

The CUET test is almost approaching. Students taking this test must be well-versed in the July
2022 CUET syllabus. CUET 2022 is divided into three sections. Part I is the language section
(IA and IB), Section II is the core topics (or domain-specific subjects), and Section III is a broad
test. One of the 27 core courses in the second section is CUET Physics. Multiple Choice
Questions (MCQs) of various difficulty will be included in the exam. The NCERT Class 12
syllabus is used for the CUET-UG 2022. As a result, students who have recently taken their
Class 12 CBSE Boards should not feel overwhelmed; by preparing online examinations, one
may simply do well. Let’s take a brief glance at the CUET Physics curriculum and see what
subjects are frequent and rare.
● Unit I: Electrostatics
● Unit II: Current Electricity
● Unit III: Magnetic Effects of Current and Magnetism
● Unit IV: Electromagnetic Induction and Alternating Currents
● Unit V: Electromagnetic Waves
● Unit VI: Optics
● Unit VII: Dual Nature of Matter and Radiation
● Unit VIII: Atoms and Nuclei
● Unit IX: Electronic Devices
● Unit X: Communication Systems

Q2. Field due to multiple charges at a point is found by using
I. superposition principle.
II. Coulomb’s law.
III. law of conservation of charges.
(a) I and II
(b) II and III
(c) I and III
(d) I, II and III

Q3. A given charge is situated at a certain distance from an electric dipole in the end-on position
experiences a force F. If the distance of the charge is doubled, the force acting on the change
will be
(a) 2F
(b) F / 2
(c) F / 4
(d) F / 8

Q5. Consider the following statements and select the correct option
I. In an external electric field, the positive and negative charges of a non—polar molecule are
displaced in opposite directions.

Q6. A current passes through a wire of nonuniform cross-section. Which of the following
quantities are independent of the cross-section?
(a) The charge crossing
(b) Drift velocity
(c) Current density
(d) Free-electron density

Q7. Huygen’s concept of secondary wave
(a) allows us to find the focal length of a thick lens
(b) is a geometrical method to find a wavefront
(c) is used to determine the velocity of light
(d) is used to explain polarization

Q9. A straight conductor of uniform cross-section carries a current I. If is the specific charge of
an electron, the momentum of all the free electrons per unit length of the conductor, due to their
drift velocity only is
(a) I s
(b)
(c) I / s
(d) 2

Q110. Electric conduction in a semiconductor takes place due to
(a) electrons only
(b) holes only
(c) both electrons and holes
(d) neither electrons nor holes

Q15. Magnetic lines of force due to a bar magnet do not intersect because
(a) a point always has a single net magnetic field
(b) the lines have similar charges and so repel each other
(c) the lines always diverge from a single force
(d) the lines need magnetic lenses to be made to interest

Q16. The work done in turning a magnet of magnetic moment M by an angle of 90° from the
meridian, is n times the corresponding work done to turn it through an angle of 60°. The value of n is given by

Q19. Two coils are placed close to each other. The mutual inductance of the pair of coils
depends upon
I. relative position and orientation of the two coils
II. the materials of the wires of the coils
III. the rates at which currents are changing in the two coils
Which of the above statements is/are correct?
(a) I only
(b) II only
(c) I and III
(d) II and III

Q21. In order to establish an instantaneous displacemet current of 1 mA in the space between
the plates of 2μF parallel plate capacitor, the potential difference need to apply is
(a) 100
(b) 200
(c) 300
(d) 500

Q22. Which of the following statements are correct?

Q24. If a variable frequency ac source connected to a capacitor then with decrease in
frequency, the displacement current will
(a) increase
(b) decrease
(c) remain constant
(d) first decrease then increase

Q25. Which of the following is/are true for electromagnetic waves?
I. They transport energy.
II. They have momentum.
III. They travel at different speeds in air depending on
their frequency.
(a) I and III (b) II only
(c) I, II and III (d) I and II
Q26. The field of view is maximum for
(a) plane mirror
(b) concave mirror
(c) convex mirror
(d) cylindrical mirror

Q27. Sunlight reaches to us in composite form and not in its constituent colours because
I. vacuum is non–dispersive.
II. speed of all colours is same in vacuum.

III. light behaves like a particle in vacuum.
IV. light travels in a straght line in vacuum.
(a) I and II
(b) II and III
(c) III and IV
(d) I and IV

Q29. Diffraction is a characteristic which is exhibited by
I. matter waves II. water waves
III. sound waves IV. light waves
(a) I and II
(b) I, II and III
(c) III and IV
(d) I, II, III and IV

Q34. Rutherford’s α-particle scattering experiment concludes that
I. there is a heavy mass at centre
II. electrons are revolving around the nucleus
(a) I only
(b) II only
(c) I and II
(d) None of these

Q35. Two light waves superimposing at the mid-point of the screen are coming from coherent
sources of light with phase difference 3π rad. Their amplitudes are 1 cm each. The resultant
amplitude at the given point will be.
(a) 5 cm (b) 3 cm
(c) 2 cm (d) zero

Q36. A nuclei having same number of neutron but different number of protons / atomic number
are called
(a) isobars
(b) isomers
(c) isotones
(d) isotopes

Q38. According to the Rutherford’s atomic model, the electrons inside the atom are

Q39. A radioactive substance has a half life of four months. Three fourth of the substance will
decay in
(a) three months
(b) four months
(c) eight months
(d) twelve months

Q40. A current is passed through a straight wire. The magnetic field established around it has
its lines of force
(a) circular and endless
(b) oval in shape and endless
(c) straight
(d) All of the above