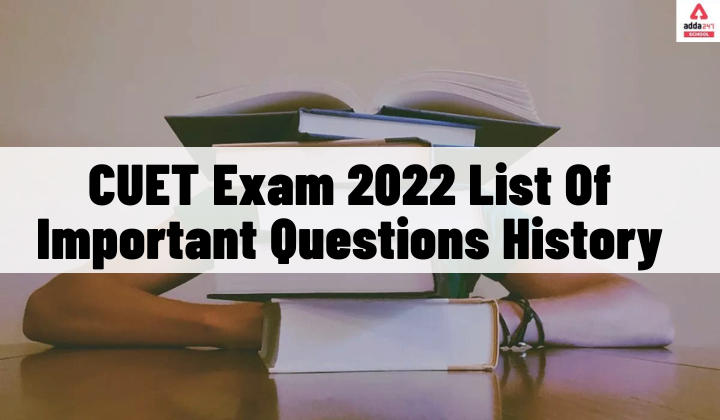 History is one of the CUET 2022 subjects. It comprises historical events, as well as their collecting, organization, and interpretation. Political, economic, Harappan archaeology, social histories utilizing the Mahabharata, religious histories, Buddhism history, medieval culture through traveler’s accounts, and other major issues are covered in the subject. We provide the CUET (History) Exam 2022. Questions and answers with full solutions are provided for free.

The following is the whole CUET History syllabus, which includes all of the essential topics:

Q1. The Harappan Civilisation called  “Harappan Culture” due to ?

(a) Group of object found in distinct geographical area

(b) It found only in the Indian Parts of area

(c) A river comes from Harappa

(a) Harappans was most intelligent

(b) Harappan was 1st site discover  with unique culture

(c) Harappan was more rich among all city

Q3. Which of the following was known as Early Harappan Site

Q4. Which of the following was known as the Mature Harappan Site ?

Q5. Which of the following Harappan sites, the evidence of “Millet” found from?

Q6. Which of the following sites is the largest sites in India

Q7. Where was the lower town situated

Q8. Where was the Citadel situated

The Citadel or Higher town was situated on the east side in the Indus Valley Civilization & The Archaeologist was found as the small city with citadel, where king and other priests lived.

Q9. Who was called Father of Indian Archaeology ?

Q10. The people of Harappan brought gold from ?

The Indus Valley Civilisation is also called the “harappan Culture” because the Archaeologists used the term “Culture” for a group object, distinctive in-style & found within the specific geographical area.

Indian Valley Civilisation also called “Harappan Civilisation” because the Harappan site was the first site to be discovered with unique culture by Indian Archaeologist Daya Ram Sahni in 1920 AD.

Some evidence of grains were found in the Harappa Civilisation include Wheat, Barley & Chickpea. Millets also were found from the site Lothal in Gujarat.

The lower town was situated on the east side in Indus Valley Civilization & the Archaeologist was found as the largest as well as walled city with several buildings built on the platform as foundation of building.

The Citadel or Higher town was situated on the east side in the Indus Valley Civilization & The Archaeologist was found as the small city with citadel, where king and other priests lived.

The Father of Indian Archaeology was called Alexandra Cunningham.

The people of Harappan brought Gold from Karnataka in south India.

(b) Writing engraved on the hard surface

Q 3. Which of the following centuries “Mahajanapadas” came to existence ?

Q4. What is the meaning of “Janapadas” ?

(c) Land where of peoples was settled

Q5. What is the meaning of the word “Oligarchy” ?

(b) Power is exercised by the group of men

Q 6. Which among the following locations where “Gautama Buddha” &  “ Vardhamana Mahaveer” died respectively ?

Q7. Who was the first ruler to inscribe his message on a stone surface ?

Q8. Which of the following “Mahajanapadas” had more than one political center ?

The word “inscription” is the writing engraved on the hard surface such as stone, metal or pottery.

The word “Oligarchy” refers to a form of government where the power is exercised by the group of men.

Ashoka The Great was the first ruler who inscribed his message on the stone surface. These stones were polished pillars as well as natural rocks.

The Magadha mahajanapadas had more than one political center. Chandar Gupta Murya was founder of the great Mauryan Empire & Ashoka was a very important king. During the Ashoka reign, The major political center was established in Patliputra, Ujjain, Taxila, Tosali & Suvarnagiri.

The important book “ Arthashastra” was written by Vishnugupta. Kautilya or Vishnugupta or Chankya was a prime minister during the Chandra Gupta Maurya reign & he was a professor of Taxila University during the King Dhananand of Nanda dynasty.

The Prayag Prashasti was composed in the Sanskrit language by poet Harisena. He was court poet during king Samudragupta of Gupta dynasty.

Q1. What does patriliny means ?

(a) From father side

(b) From mother side

(c) From Uncle side

Q3. Which of the following is an early Vedic book ?

Q4. What does the word “Endogamy” mean ?

(a) Women having several husband

(b) Men having several wives

(c) Marriage outside the Kins

(d) Marriage within the group

(a) Purpose of Instruction

(b) Purpose of Stories

Q9. Where was the Kuru kingdom situated ?

The term “Patriliny” means that the descent from father to son, grandson & son on.

The Pandavas & Kauravas were groups of cousins & Fue over power & land in the Mahabharatas.

Endogamy means a person’s marriage within the unit & it could be a group, caste or group of the same locality.

Brahmanas were supposed to study & teach the Vedas, perform sacrifices & get sacrifices performed, give & receive gifts.

Vaishyas were expected to engage in agriculture, pastoralism & trade.

Shudras were assigned only one occupation, that of serving the higher varnas.

The book “Sutta Pitaka” belongs to Buddhism & found in a text suggesting that originally human beings did not have fully involved bodily forms nor was the world of plants fully developed.

The Sutas was a poet & author who composed a story about Kshatriya warrier & composed poems to celebrate their victory.

The Kuru Kingdom was situated at Ganga doab near Meerut in modern day Uttar Pradesh.

Drupadi was the daughter of Drupada, he was king of Panchala.

Q1. Why is Sanchi important ?

(d) None of the Above

Q2. Who protected “Sanchi Stupas” during the 19th century ?

(d) The Kingdom of Bhopal

Q3. Which of the following was related to the Buddhist book “ Vinay Pitaka” ?

Q4. Which of the following was related to the Buddhist book “ Abhidhamma Pitaka”?

Q5. Which of the following centuries was “Vardhamana” known as Mahavira ?

Q6. What does the word “Hagiography” mean ?

(a) Biography of Saint

(b) Story of Saint

Q7.  What does the word “Anicca” mean according to Buddha Philosophy ?

Q8. What are the Three jewels of Buddha ?

Q9. Who was the first Bhikkhuni in Buddhism ?

(a) Residence of Bhikkhu

(b) Worship Place for Bhikkhu

Sanchi is important for Buddhist monuments & it is located in Madhya Pradesh.

During the 19th century, The “Sanchi Stupas” was protected by the Shahjehan Begum from the Kingdom of Bhopal.

The Buddhist book “Vinay Pitaka” dealt with rules & regulation for who joined the Sanga & monastic order.

The Buddhist book “Abhidhamma Pitaka” dealt with Philosophical Matter for who joined the Sanga & monastic order. It was compiled in the 3rd assembly held in Patliputra by Mogaliputta Tissa.

In the 600 BCE, The Vardhamana was known as Mahavira. He was 24 Tirthankara & he was born at Vaishali in Lichchavi Mahajanapadas.

The word “Hagiography” means Biography of Saints or religious leaders.

According to the Buddha Philosophy, The word “Anicca” means “Transient”.

The first Bhikkhuni was the mother of the Gatama Buddha named Mahapajapati Gomati.

The word Chaitya was a worship place for Bhikkhu & built by kings at the Caves.