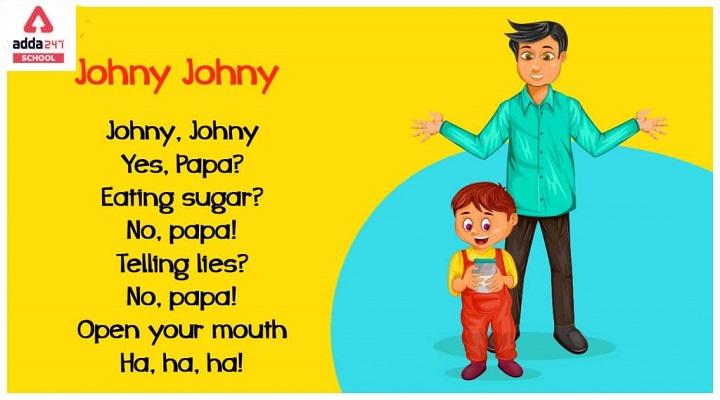 In this poetry, we observe a son and father conversing in a rhythmic manner. Where the father catches his toddler with his arm trapped inside a sugar bowl. The father now inquires of his son johnny about what he is doing with his hand inside the sugar container. Johnny lies nonchalantly and says, “No, father” I did not eat the sugar.  The father immediately recognises that his kid is lying. To clear his doubt and to be sure the father asks the son again whether he is lying to him. Which, once again, the son lies.

The father is now aware that Johny had been consuming sugar without authorization. As a result, he requests that Johnny open his mouth, to which Johnny responds with a laugh “Ha” “Ha” “Ha”. And as Johnny chuckles, his father notices that he has been eating sugar and lying to him that he did not eat sugar.

Poems should be an important component of a child’s development since they enrich their life by offering a range of diverse experiences. As a result, every child should be encouraged to read more poems.  The poem Johnny Johnny Yes Papa has a very deep meaning behind it. The teacher or parents must teach the moral of this story to their children so they can learn to speak the truth and to be honest.

Q. What is the meaning of Johnny Johnny Yes Papa?

Q. Where does Johnny Johnny Yes Papa come from?

An American professor and scholar Francelia Butler documented Johnny Johnny Yes Papa nursery rhyme in her book 1989. Which was told in Kenya for the first time in 1980.

An American professor and scholar Francelia Butler has written Johnny Johnny Yes Papa in her book 1989.