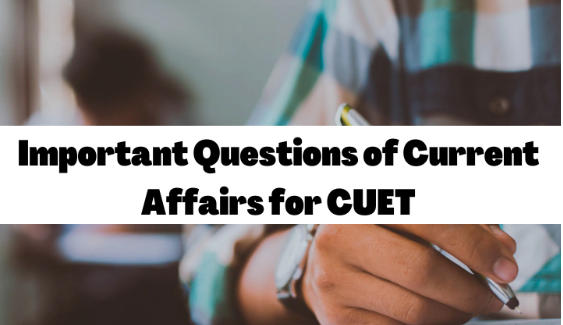 CUET 2022 General Test, GK, Current Affairs MCQ: Candidates seeking admission to undergraduate programmes throughout the nation take the CUET National-level entrance test. A CUET General Test will be found in Section III of the three components that make up the CUET test. The current affairs part is a key component of this. Knowing the most recent news will greatly help you ace the exam. Many of you must be seeking for CUET Current Affairs Practice Questions to become familiar with the kinds of questions that may be anticipated in order to ace this subject. We have created a PDF with all the crucial CUET General Knowledge and Current Affairs practice questions to help you with the same. Candidates may test them out and see how prepared they are.

Section III of the CUET exam is the General Aptitude Test (GA), which consists of the following sections:

In this article, we will give you the sample questions on General Knowledge and current affairs in the section General Test

Q2. Which country has become the first foreign country to place order for the purchase of BrahMos Shore-Based cruise Missile System for its navy?

Q3.How much amount of financial aid has been extended by India to Sri Lanka to over forex crisis?

Q4. José Daniel Ortega Saavedra has sworn in for 5th term as the president of which country?

Q5. Who among the following launched ‘North East on Wheels Expedition’ to promote Culture of Northeastern States?

Q7. Which of the following states/UTs has declared Jerri hamlet as its first ‘Milk Village’?

Q8. The new species of rain frog that was found in the Panama forest has been named after _____.

Q9. Recently, which of the following nation has decided to move its capital to Nusantara?

Q11. Which state celebrated Losoong (Namsoong) Festival to mark the beginning of the harvest season?

Q12. As per SBI Ecowrap, India’s GDP projected to grow at how much percent in FY22?

Q13. The Ministry of External Affairs (MEA) has signed an agreement with which technology company

for the second phase of the Passport Seva Programme (PSP-V2.0)?

Q14.  Pravasi Bhartiya Divas is celebrated on which day?

Q16. Which of the Indian Institute builds a new interdisciplinary water management and policy centre known as ‘AquaMAP’ to address India’s water issues?

Q17.  OECD projects India’s GDP for FY23 at how much percent?

Q18. Reserve Bank of India (RBI) has cancelled the license of People’s Co-operative Bank Limited. It is based in which of the place?

Q20. Which bank has announced that it has partnered with Chennai Super Kings (CSK), one of India’s most successful cricket teams, to introduce a co-branded credit card?

Q21. Name the Indian badminton player who has settled for silver medal in the men’s singles final at the German Open 2022.

Q22. India’s first ‘World Peace Center’ will be established in which Indian city?

Q24. Who was sworn in as the 18th chief minister of Punjab?

Q25. The country’s first Artificial Intelligence &amp; Robotics Technology Park (ARTPARK) was launched in which of the place?

Q26. Which Payments Bank punished by RBI for data breaching to Chinese firms?

Q27. Which state has emerged on top when it comes to maternal and child health in

Maternal Mortality Ratio (MMR) of 30 (per one lakh live births) in the country?

Q28. Sahitya Akademi, India’s National Academy of Letters has published a book-length poem ‘Monsoon’. Who has written it?

Q29. National Vaccination Day celebrates on which of the day?

Q30. In which of the state India’s First Digital Water Bank, ‘AQVERIUM’ has been launched?

Q32. Eugene Newman Parker from America has passed away at the age of 94. He was well known for which of the profession?

Q34. The 35th edition of the world-famous Surajkund International Crafts Mela is organized in which state?

Q35.  The Ordnance Factories’ Day is observed on the which day of March every year?

Q36. Rajesh Gopinathan re-appoints as MD and CEO of which tech giant company for five years?

Q37. NMDC has signed a MoU for drone-based mineral research with which Indian

Q38. Which of the company becomes the first to offer digital payment to non-internet users?

Q39. International Day of Happiness 2022 is observed on which of the following day globally?

Q40. Government of India has increased timeline to _______ years for startups for converting debt investment into equity.

Q43. Name the Author and journalist who has won the William E. Colby Award 2022 for his military and intelligence writing “The Hardest Place: The American Military Adrift in

Q44. Who chaired the 7th Annual Meeting of Board of Governors of NDB which held under the theme of “NDB: Optimising Development Impact”?

(a) First Sunday of May

(b) Third Friday of May

(c) First Monday of May

(d) Second Saturday of May

(e) Last Sunday of May

Q47. Which of the following has installed the “world’s highest weather station” on Mount

Everest at an altitude of 8,830 metres to automatically measure various meteorological phenomena?

Q48. Which of the bank to sell quarter of its stock in Ageas Federal Life Insurance?

To Know the ANSWERS OF THESE QUESTIONS DOWNLOAD ADDA APP

Download the app to get the answers of these questions.

Also please feel free to call on this number +91-7678264927 to get free counselling for any course and career choice.