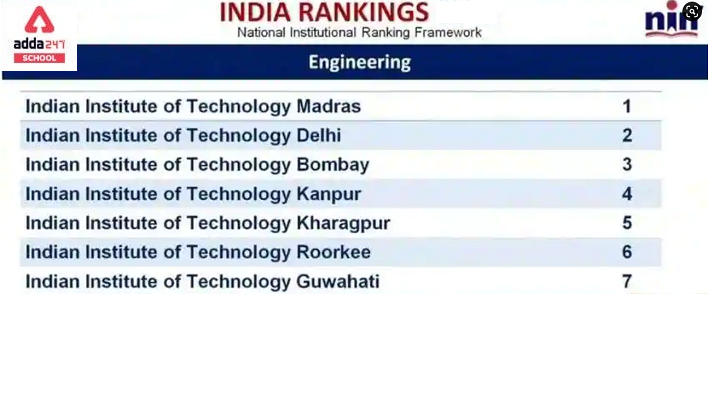 The Indian Institutes of Technology are autonomous institutions that have been designated as “Institutes of National Importance” by the government. The first campus of IIT was established at Kharagpur in 1951, and they have been designated as “Institutes of National Importance” since 1961. IITs are administered by the Institutes of Technology Act, 1961, and there are currently 23 IITs in India. These 23 IITs have over 16,000 seats available across various specialisations, making them one of India’s premier engineering institutes.
Every year, thousands of students take the JEE Main and JEE Advanced exams, setting new records each time. Candidates who pass the JEE Main Exam are invited to take the JEE Advanced Exam. Students are then qualified for admission to India’s several IITs. Students are qualified for admission to various IITs based on their test scores.
The entrance exam will be held four times a year starting with JEE Main Exam 2022. It will take place throughout the months of March, April, May, and June. The National Testing Agency (NTA) issues all other JEE-related notifications, including the JEE Main Admit Card.

The Ministry of Human Resource Development (MHRD) of India recently released the NIRF Ranking 2021. In the NIRF Ranking 2021, a total of 17 IITs in India are ranked out of a total of 23 IITs, indicating that these are among India’s top IITs. The list only includes the greatest of the best.
The rankings of India’s IITs are listed here. Check out India’s top IITs based on NIRF rankings:

Top 10 IIT in India Based on NIRF Ranking

However, NIRF has only ranked 17 of India’s 23 IITs. The following are the five IITs that are not ranked by NIRF:

IIT Madras is a university in Chennai that was formed in 1959 by the Indian government with the help of the West German government. IIT Madras has been ranked as India’s Best Engineering Institute for three years in a row by the NIRF Ranking.

IIT Delhi was founded in 1961, and it is currently ranked second among India’s premier engineering institutes. The College of Engineering and Technology was the name given to the institute. In 1963, however, the institute was given the name IIT.
The institute is located in the heart of the National Capital and boasts a lovely campus. Hostels on the IIT Delhi campus are named after Indian mountain ranges.

IIT Bombay, founded in 1958 and located in Powai, Mumbai, is India’s second-oldest IIT. The institute offers a wide range of graduate programmes. There are 17 academic departments at the Institute. Aside from that, there are 13 multidisciplinary centres and three outstanding schools.

The oldest Indian Institute of Technology is IIT Kharagpur. It was founded in 1951 in the city of Kharagpur, West Bengal. There are 19 academic departments in the institute. Apart from the 19 academic departments, there are eight multidisciplinary centres, thirteen schools of excellence, and twenty-five core research divisions. The library of IIT Kharagpur is one of the country’s largest.

IIT Roorkee was originally known as the University of Roorkee and Thomason College of Civil Engineering. It was founded in Roorkee, Uttarakhand, in the year 1847. In 2001, the institute was designated as India’s sixth IIT, with 21 academic departments offering 11 undergraduate, one integrated dual degree, 61 postgraduate, and numerous doctoral programmes.

In the year 1993, IIT Guwahati was founded. It is India’s sixth-oldest IIT. IIT Guwahati is located on the Brahmaputra River’s northern bank. There are 215 faculty members and 300 support employees at the institute, which encompasses 11 academic departments and 10 research centres. The institute has quickly risen to become one of India’s top ten IITs.

IIT Hyderabad was founded in 2008 in Telangana’s Sangareddy region and is known for its academic strength, research, and proximity to the IT hub. The Institute has 14 academic departments that offer Undergraduate and Postgraduate courses in nine areas, as well as 285 spaces in B. Tech degree programmes.

The Indian Institute of Technology, Dhanbad is a public technical institution with a main campus of 218 acres in Dhanbad, India. IIT (ISM) is an Institute of National Importance with 18 academic departments offering programmes in Engineering, Applied Sciences, Humanities and Social Sciences, and Management. Previously, it was known as the Indian School of Mines, Dhanbad.

Which IIT in India is the best?

Which of India’s IITs is the largest?

The campus of IIT Kharagpur is the largest, covering 2000 acres.

IIT Kanpur is the most popular choice among top 500 students.

IIT or NIT: which is better?

IITs outperform NITs when it comes to the level of education they deliver.

Is IIT a difficult programme?

The Indian Institutes of Technology (IITs) are among the most competitive universities in the world.