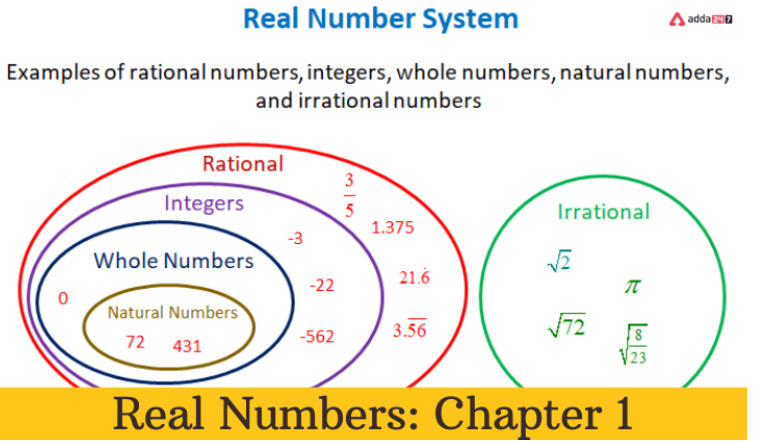 Real numbers include both irrational and rational numbers.

Rational numbers are real numbers with the pattern p/q, q 0, and p, q I.

Real numbers cannot be expressed in the form p/q, whose decimal expansions are non-terminating and non-recurring.

*Every Whole Number is an integer.

*Rational Numbers are the same as Integers.

*All Rational Numbers are Real Numbers.

Composite numbers are any natural numbers that may be divided by one, including the number one itself. Four, six, eight, nine, ten, etc.

There are distinct integers q and r that satisfy the equation a = bq + r, 0 r b when given two positive integers a and b.

The remainder being zero, (8) is HCF’s divisor

Euclid’s Division Lemma can be extended to all integers except zero, i.e., b 0. This is true even if it is only stated for positive integers.

Steps for building a factor tree:

With the exception of the sequence in which they appear, every composite number can be written as a product of primes, and this expression is singular.

1. Finding The HCF And LCM Of Two Or More Positive Numbers Using An Algorithm

Step I: The first step is to factorise each of the positive integers that are given and express each as a product of powers of primes that are arranged in ascending order of prime number.

Step III: Find the largest exponent and multiply it by the exponents to determine the LCM.

2. Demonstrating The Irrationality Of Numbers

3. To Ascertain How Rational Numbers Expand To Decimal Places:

Ques. A lemma is an axiom used for providing

(d) none of these

Ans: (a) other statement

Then the co-primes x and y of the given rational number where (y ≠ 0) is such that:

Therefore, √5 is also a rational number. But this confronts the fact that √5 is irrational.

Thus, our assumption that 3 + 2√5 is a rational number is wrong.

Ques. Check whether 6n can end with the digit 0 for any natural number n.

Ans: If the number 6n ends with the digit zero (0), then it should be divisible by 5, as we know any number with a unit place as 0 or 5 is divisible by 5.

Ans. Both rational and irrational numbers are considered to be real numbers.

Ques 2. A real number may not be negative.

Ques 3. What is the largest divisible number?

Ans. HCF: HCF stands for “Highest Common Factor.” The largest number that may divide the provided integers is what it refers to.

Ques 4. Real numbers have an end?