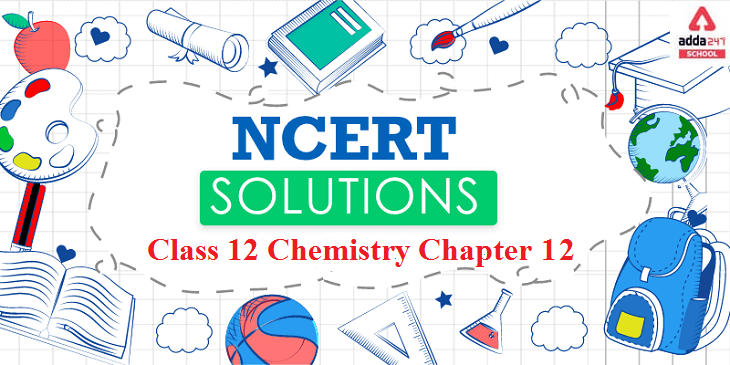 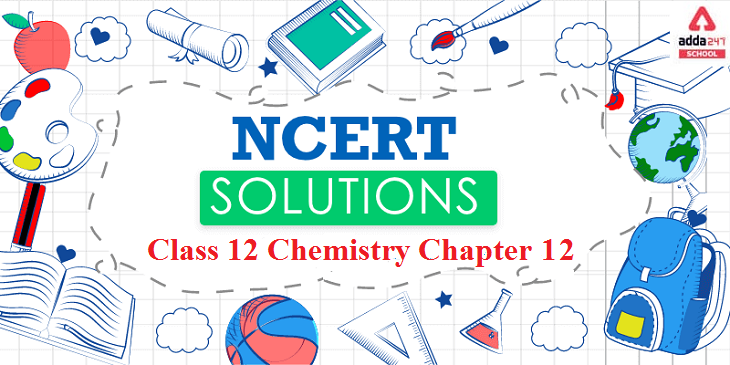 Adda247 provides NCERT Solutions for Class 12 Chemistry. The NCERT Solutions provided here will enhance the concepts of the students, as well as suggest alternative methods to solve particular problems to the teachers.

NCERT Solutions are drafted by the faculty at Adda247 to help students learn all the complex concepts efficiently. NCERT Textbooks are answered in a systematic format to help the students learn in a shorter duration. These solutions are tailored by vast research to make it easier for the students to complete the whole syllabus before board exams. A lot of materials are available online but it is very important for the students to understand their needs and find them accordingly. For this purpose, we at Adda247 provided both online and offline formats of the solutions completely based on the latest syllabus of the CBSE board.

Chemistry NCERT Solutions Class 12 includes a number of topics that offer students an in-depth knowledge of different aspects of Chemistry. To distinguish the equations and chemical formulas, after solving the NCERT chemistry class 12 PDF can be handy. The solution provided by Adaa247 is available in an easily downloaded format.

You can refer to the chemistry class 12 solutions for better solutions and score good marks in board as well as competitive exams.

The students can access the solutions anywhere while browsing web easily. The solutions are very precise and accurate.

The twelfth chapter deals with the Aldehydes, Ketones and Carboxylic Acids. These compounds contains carbon-oxygen double bond which are known as carbonyl compounds.

Students should study this topic with greater attention because this chapter is a vital part of chemistry Class 12. However, while preparing this chapter, students might face many difficulties but with right/ proper guidance, they might prepare this chapter and score god marks in exams.

Organic Chemistry is scoring part of the syllabus. While preparing for exams students can take help from this solution for qualitative preparation.

Students can easily download these PDF as per their convenience. The answers are elaborately explained along with several illustrations to help students understand the concepts better.

Working out on more and more problems will help students to perform well in class 12 Board exams. NCERT Solution gives the answer to all these exercise in a clear, simple and straightforward way. Students can check their answers with the solutions provided. It is also another way coordination compounds class 12 NCERT solutions help students.

Moreover, students studying from solutions will get to learn the following topics quickly:

(i) When HCN reacts with a compound, the attacking species is a nucleophile, CN – . Therefore, as the negative charge on the compound increases, its reactivity with HCN decreases. In the given compounds, the +I effect increases as shown below. It can be observed that steric hindrance also increases in the same

Hence, the given compounds can be arranged according to their increasing reactivities toward HCN as:

(ii) After losing a proton, carboxylic acids gain a negative charge as shown:

Now, the +I effect of isopropyl group is more than that of n-propyl group. Hence, (CH3)2CHCOOH is a weaker acid than CH3CH2CH2COOH.

Also, the – I effect grows weaker as distance increases. Hence, CH3CH(Br)CH2COOH is a weaker acid than CH3CH2CH(Br)COOH.

Hence, the strengths of the given acids increase as:

(i) Propanal and propanone can be distinguished by the following tests.

Aldehydes respond to Fehling’s test, but ketones do not.

Propanal being an aldehyde reduces Fehling’s solution to a red-brown precipitate of Cu2O, but propanone being a ketone does not.

Aldehydes and ketones having at least one methyl group linked to the carbonyl carbon atom respond to iodoform test. They are oxidized by sodium hypoiodite (NaOI) to give iodoforms. Propanone being a methyl ketone responds to this test, but propanal does not.

(ii) Acetophenone and Benzophenone can be distinguished using the iodoform test.

Methyl ketones are oxidized by sodium hypoiodite to give yellow ppt. of iodoform. Acetophenone being a methyl ketone responds to this test, but benzophenone does not.

(iii) Phenol and benzoic acid can be distinguished by ferric chloride test.

But benzoic acid reacts with neutral FeCl3 to give a buff coloured ppt. of ferric benzoate.

(iv) Benzoic acid and Ethyl benzoate can be distinguished by sodium bicarbonate test.

Acids react with NaHCO3 to produce brisk effervescence due to the evolution of CO2 gas.

Benzoic acid being an acid responds to this test, but ethylbenzoate does not.

(v) Pentan-2-one and pentan-3-one can be distinguished by iodoform test.

(vi) Benzaldehyde and acetophenone can be distinguished by the following tests.

Aldehydes respond to Tollen’s test. Benzaldehyde being an aldehyde reduces Tollen’s reagent to give a red-brown precipitate of Cu2O, but acetophenone being a ketone does not.

Acetophenone being a methyl ketone undergoes oxidation by sodium hypoiodite (NaOI) to give a yellow ppt. of iodoform. But benzaldehyde does not respond to this test.

(vii) Ethanal and propanal can be distinguished by iodoform test.

The introduction of an acetyl functional group into an organic compounds is known as acetylation. It is usually carried out in the presence of a base such as pyridine, dimethylaniline, etc. This process involves the substitution of an acetyl group for an active hydrogen atom. Acetyl chloride and acetic anhydride are commonly used as acetylating agents.

The self oxidation – reduction reaction of aldehydes having no α – hydrogen’s on treatment with concentrated alkalis is known as the cannizzaro reaction. In this reaction, two molecules of aldehydes participates where one is reduced to alcohol and the other is oxidised to carboxylic acid.

For example, when ethanol is treated with concentrated potassium hydroxide, ethanol and potassium ethanoate are produced.

For example, ethanol and propanal react to give four products.

Decarboxylation refers to the reaction in which carboxylic acids lose carbon dioxide to form hydrocarbons when their sodium salts are heated with soda – lime.

Cyclohexanone forms cyanohydrin in good yield nut 2,2,6-trimethylcyclohexanone does not. There are two –NH2 groups in semicarbazide. However, only one is involved in the formation of semicarbazones. During the preparation of esters from a carboxylic acid and an alcohol in the presence of an acid catalyst, the water or the ester should be removed as soon as it is formed.

In this case, the nucleophile CN- cab easily attack without any steric hindrance. However, in the case of 2, 2, 6- trimethylcyclohexanone, methyl groups at α-positions offer steric hindrance and a s result, CN- cannot attack effectively.

For this reason, it does not form a cyanohydrin.

Semicarbazide undergoes resonance involving only one of the two –NH2 groups, which is attached directly to the carbonyl – carbon atom.

Therefore, the electron density on –NH2 group involved in the resonance also decreases. As a result, it cannot act as a nucleophile. Since, the other –NH2 group is not involved in resonance; it can act as nucleophile and can attack carbonyl – carbon atoms of aldehydes and ketones tom produce semicarbazones.

Ester along with water is formed reversibly from a carboxylic acid and an alcohol in presence of an acid.

If either water or ester is not removed as soon as it is formed, then it reacts to give back the reactants as the reaction is reversible. Therefore, to shift the equilibrium in the forward direction i.e., to produce more ester, either of the two should be removed.

Thus, the ratio of the number of carbon, hydrogen, and oxygen atoms in the organic compound can be given as:

Molecular mass of the compound = 86

Therefore, the molecular formula of the compound is given by C5H10O.

The given compound also gives a mixture of ethanoic acid and propanoic acid.

Hence, the given compound is Pentan-2-one.

i.)         Phenoxide ion has non-equivalent resonance structures in which the negative charge is at the less electronegative carbon atom whereas in case of carboxylate ion both the resonating structures are equivalent.

ii.)       The negative charge is delocalised over two electronegative oxygen atoms in carboxylate ion whereas in  phenoxide ion the negative charge less effectively delocalises over one oxygen atom and less electronegative  carbon atoms. So the carboxylate ion is more resonance stabilised than phenoxide ion. Thus, the release of proton from carboxylic acid is much easier than from phenol. Hence, carboxylic acid is a stronger acid than phenol.

Ans. Students, while preparing chapter twelve for their boards, should at first go through the previous year’s papers. This will help them to find out the most relevant questions for this exam. Once they are done with this, they should start their preparation.

They should emphasise on the properties of Aldehydes, Ketones and Carboxylic Acids. They should also practice their reactions regularly. While doing so, they should cross-check it from NCERT Solutions for Class 12 Chemistry aldehydes and ketones. Students should practice the exercise more than once. This will help them to identify their mistakes and rectify them well before exams.

Ans. The important topics you should learn from Chapter 12 of NCERT Solutions for Class 12 Chemistry are:

Ans. From the Chapter 12 of NCERT Solutions for Class 12 Chemistry, you can learn about concepts like –