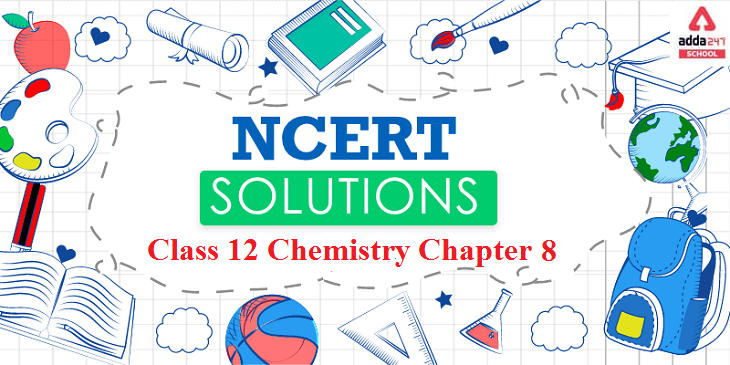 Complete 16 chapters wise solutions were provided for the benefit of students.12th class sets the base for higher education for every student. This makes it the most crucial class for any student who is aiming for his/her dream of quality education. Scoring good marks in the 12th class is equivalent to a quality high education. So, it becomes extremely important for students to give a boost to their class 12 Chemistry preparation with Adda247 NCERT solutions.

Students can access the solution anywhere while browsing the web easily. The solutions are very precise and accurate.

The detailed, explanative NCERT solutions are widely known for being extremely student-friendly and easy to digest. Solutions to relative complex questions are always broken down into simpler one in order to help students focus on the ‘method to solve’ rather than the solution itself. This concept centered approach is what enables students that use the Adda247 NCERT Solutions to solve all similar questions with ease.

This chapter deals with the elements of D and F block in table. In this chapter students shall first deal with the electronic configuration, occurrence and general characteristics of the transition elements with special emphasis on the trends in the properties of the first row transition metals along with the preparation and properties of some important compounds. This will be followed by the consideration of certain general aspects such as electronic configurations, oxidation states and chemical reactivity of the inner transition metals.

Question: 1 To what extent do the electronic configuration decide the stability of oxidation states in the first series of the transition elements? Illustrate your answer with examples.

Question: 2 What may be the stable oxidation state of the transition element with the following d elements d electron configuration in the ground state of their atoms.

Question: 3 Name the oxometal anions of the first series of the transition element with the following d electron configurations in the ground state of their atoms: 3d3, 3d5.3d8 and 3d4?

The steady decrease in the size of lanthanoid ions (M3+) with the increase in atomic number is called lanthanoid contraction.

Due to lanthanoid contraction, the size of M3+ ions decreases and there is increase in the covalent character in M – OH bond.

Elements such as Zn, Cd, and Hg cannot be classified as transition elements because these have completely filled d-subshell.

(ii) Transition elements have high effective nuclear charge and a large number of valence electrons. Therefore, they form very strong metallic bonds. As a result, the enthalpy of atomization of transition metals is high.

(iii) Most of the complexes of transition metals are coloured. This is because of the absorption of radiation from visible light region to promote an electron from one of the d-orbitals to another. In the presence of ligands, the d-orbitals split up into two sets of orbitals having different energies. Therefore, the transition of electrons can take place from one set to another. The energy required for these transitions is quite small and falls in the visible region of radiation. The ions of transition metals absorb the radiation of a particular wavelength and the rest is reflected, imparting colour to the solution.

(iv) The catalytic activity of the transition elements can be explained by two basic facts.

(a) Owing to their ability to show variable oxidation states and form complexes, transition metals form unstable intermediate compounds. Thus, they provide a new path with lower activation energy, Ea, for the reaction.

(b) Transition metals also provide a suitable surface for the reactions to occur.

Question:8 What are the interstitial compounds? Why are such compounds well known for transition metals?

Interstitial compounds are well known for transition compounds due to its closed crystalline structure with voids in them. The atomic size of transition metals are very large hence have large voids to occupy these small atoms.

Potassium dichromate is prepared from chromate in the following steps:

Potassium dichromate being less soluble than the sodium chloride is obtained in the form of crystals and can be removed.

The dichromate ion exist in equilibrium with chromate ion at pH and however, by changing the pH, they can be interconverted.

Ans. Students who are not able to get their doubts cleared during class hours can make use of the NCERT Solutions at Adda247. The experts frame the solutions with utmost care with the main objective of helping students with their board exam preparation. To score good marks in chemistry, learning the concepts on a daily basis is very much important. The concepts are explained in an interactive manner to help students grasp them and perform well in the board exams.

Ans. In the board exams, units 6, 7 and 8 come under one section which carries 19 marks. So, chapter 8 carries 5 marks which consists of both short and very short answer questions. To score full marks in this chapter, students are advised to solve the textbook questions using the solutions available at Adda247. The solutions of this chapter are framed by expert faculty having vast experience in the relevant subject. They create answers which are concept focused rather than question focused to build a strong foundation of basic concepts which are important from the exam perspective.

Ans. The important NCERT topics and subtopics for d and f block chapter are given below:

The NCERT solutions cover all the chapters through exercise and detailed illustrations. Nearly 38 questions are solved extensively by expert teachers that generate improved understanding. Apart from this, there is also a section of solved examples that helps the students in clarifying the concepts of d and f block elements.

Ans. Some of the critical questions on d and f block elements are given below: