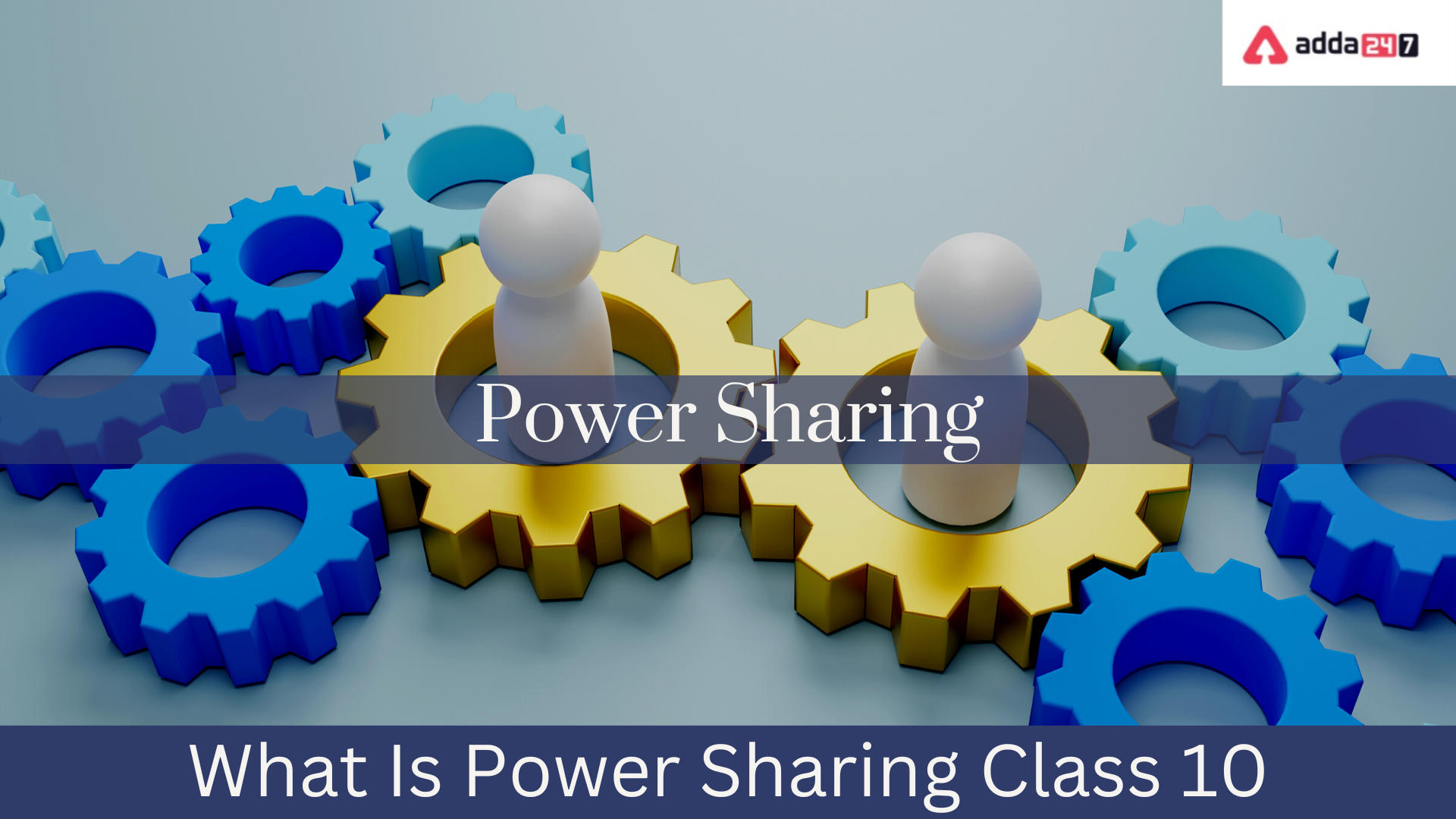 What Is Power Sharing for Class 10

What Is Power Sharing Class 10: The process of distribution of the power of a country or a region amongst the different parts or organs of any particular government such as the judiciary, executive, and legislature can be defined as power sharing. With the help of this process, several countries have achieved stability in the best way on their order of maintaining a political calm. Apart from that, power sharing also involves sharing of power along with the different district levels such as local, state, and union.

What Is Power Sharing Forms?

A Horizontal Distribution: When it comes to a horizontal distribution of the entire power, there is a division of the power amongst the different organs that are present in the government. A few examples of these organs can include executive, legislature, and judiciary as well. One of the countries that practice this type of power sharing in the Government in India.

In this particular case, the power will be shared amongst the different levels of the governments. There is one country that practices this type of sharing of power and it is the United States of America. While different countries practice different ways to share power, all of these methods are pretty effective and important.

Here is one of the forms of power-sharing that you need to know about. In this case of sharing the power, it is shared amongst the different types of social groups that are present in any area or region or an entire country. There can be different social groups such as religious associations and linguistic groups as well. One of the main examples of this type of power-sharing is the community government that people use in Belgium.

What Is Power Sharing in Belgium and Sri Lanka Briefly Explain?

To understand majoritarianism and accommodation better, let us take the case of two countries, Sri Lanka and Belgium. Sri Lanka, with its varied population of two crores, is an island country. It has 74 percent of Sinhala-speaking people, who are mostly Buddhists. Out of the remaining population, 18% speak Tamil. This group can be further subdivided into Indian Tamils, who formed 5%, and Sri Lankan Tamils, who comprised 13% and are concentrated in the north and east of the country.

Sri Lanka used the idea of majoritarianism to handle this cultural diversity. After gaining independence in 1948, the Sinhalese majority attempted to remodel Sri Lanka as a Sinhalese nation-state. In 1956, the official language act, popularly known as the Sinhala only act, was enacted. Special policies supporting the Sinhala aspirins for University and government posts were created. Buddhism was made the national religion.

Sri Lanka emerged as an independent country in 1948. The Sinhala community was in the majority so they had formed the government. They also followed preferential policies that favoured Sinhala applicants for university positions and government jobs. These measures taken by the government gradually increased the feeling of alienation among the Sri Lankan Tamils. Sri Lankan Tamils felt that constitution and government policies denied them equal political rights, discriminated against them in getting jobs and other opportunities and ignored their interests. Due to this, the relationship between the Sinhala and Tamil communities become poor. Sri Lankan Tamils launched parties and struggles for the recognition of Tamil as an official language, for regional autonomy and equality of opportunity in securing education and jobs. But their demand was repeatedly denied by the government. The distrust between the two communities turned into widespread conflict and turned into a CIVIL WAR. As a result, thousands of people of both the communities have been killed. Many families were forced to leave the country as refugees and many more lost their livelihoods. The civil war ended in 2009 and caused a terrible setback to the social, cultural and economic life of the country.

Let us now see what Belgium had to face

Belgium is located in northwest Europe. Out of the total population of around 1 crore, 59% speak Dutch and live in the Flemish region. 40% speak French and are settled in the Vilonia region, and 1% speak German. In contrast, the capital city of Brussels has 80% French-speaking people and the remaining 20% speak Dutch. The French-speaking minority in Belgium were wealthy and the Dutch community hated this, leading to tensions during the 1950s and 60s. This friction was highest in Brussels where the Dutch-speaking community was a minority. Unlike Sri Lanka, Belgium took up the approach of accommodation.

Here we see that Belgium gave regard to the feelings of cultural differences, while Sri Lanka forced its domination over the minority class. Belgium ensured stability through its policy of accommodation while in Sri Lanka majoritarianism, even today continues to be a threat to its unity and growth.

This is all about power-sharing the way various governments have been formed in due course of time. Dealing with internal communal and religious problems is dealt with such precision. It all depends on what the contemporary sovereign power decides for the people of the country.

Belgium is a small country in Europe with a population of over 1 crore, about half the population of Haryana. Of the country’s total population, 59% speaks Dutch language, 40% of people speak French and the remaining 1% speak German. Look at the map below to know the language variation of Belgium. The minority French-speaking community was rich and powerful, so they got the benefit of economic development and education. This created tensions between the Dutch-speaking and French-speaking communities during the 1950s and 1960s.

In Belgium, the government handled the community difference very well. Between 1970 and 1993, Belgian leaders amended their constitution four times and came up with a new model to run the government.

Here are some of the elements of the Belgian model.

Question 1 After independence, Sri Lanka witnessed the supremacy of which community?

Ans. After independence in 1948, Sri Lanka witnessed the supremacy of Sinhala community.

Question 2 Do you think that the steps taken by Shri Lankan Government to establish the supremacy of Sinhalas were justified be long lasting? Give your view point.

Ans. The steps taken by the Sri Lankan government to establish Sinhalas’ supremacy cannot be justified as long lasting because of the following reasons.

Ans. Sharing of power makes a country more powerful and united because of the following reasons.

Power sharing ensures that all people have a stake in government.

Power sharing ensures maximum participation. It upholds the concept of people’s rule. It always brings better outcomes in democracy. It ensures the political stability in democracy.

Power sharing accommodates diverse groups. It helps to reduce the possibility of conflict between social groups.

Ans. The following are the majoritarian measures adopted by the Sri Lankan government to establish Sinhala supremacy.

Question 5 Bring out any two sharp contrasts between Belgium and Sri Lankan democracies.

Ans. Sri Lanka and Belgium are both democratic countries yet have a very diverse social set-up. Both the countries have adopted very different approaches when it comes to power sharing.

Question 6 What is the official religion of Sri Lanka?

Ans. Buddhism is the official religion of Sri Lanka.

Question 7 After independence, Sri Lanka witnessed the supremacy of which community?

Ans. Sri Lanka witnessed the supremacy of the Sinhala community after independence.

Question 8 Explain the three ways by which Belgium has accommodated the existing regional differences and cultural diversities.

Ans. When the Belgian leaders recognized the existence of regional differences and cultural diversities, they amended their constitution four times in order to accommodate these differences.

The following are the ways in which Belgium has accommodated the existing regional differences and cultural diversities.

Question 9 Sharing of powers makes a country more powerful and united. Do you agree with the statement? Why?

Question 10 Highlight the measures adopted by the Belgium Constitution for the prevention of conflicts in Belgium.

Ans. When the Belgian leaders recognized the existence of regional differences and cultural diversities, they amended their constitution four times in order to accommodate these differences.

The following are the ways in which Belgium has accommodated the existing regional differences and cultural diversities.

What Is Power Sharing Class 10 in Hindi

What Is Power Sharing Class 10 -FAQs

Question 1 What is ‘Power Sharing’?

Ans. Power sharing means the distribution of power among the organs of the government such as the legislature, executive and judiciary.

Question 2 What are the languages spoken in Belgium?

Question 3 Where is Sri Lanka located?

Ans. Sri Lanka is an island in the Indian Ocean, located to the south of the Indian Subcontinent. sprawling over the area of 65,525 Sq. km.