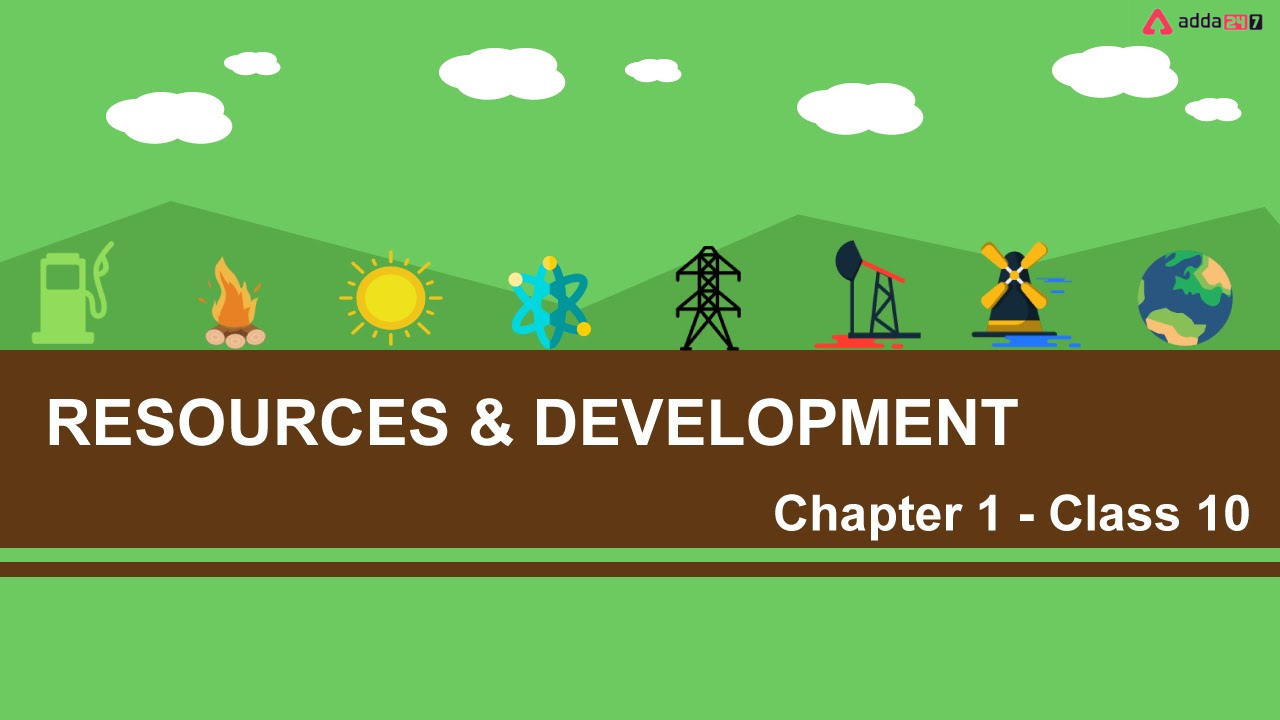 Resources and Development Class 10 Notes- What is Resources?

The term “Resources” refers to everything our environment gives us that is practical economically, socially, and technologically.

It creates an interactive relationship between institutions, technology, and nature that helps the economy expand more quickly.

Resources are a part of people since they are used and utilized by people. They belong to the human resources department.

The following criteria can be used to categorize the resources:

(a) By origin, both biotic and abiotic

(b) Based on renewable and non-renewable resources’ exhaustibility.

(c) Depending on who owns it: privately or publicly, locally, nationally, or internationally

(d) In accordance with the development status of the potential, developed stock, and reserves.

On Basis Of Origin

On The Basis Of Exhaustibility

On The Basis Of Ownership

On The Basis Of The Status Of Development

Although human civilization possesses the necessary technology to make use of these resources, further technological advancement is needed to utilize these resources fully.

Example: Hydropower is only produced for a few uses because it is produced from water.

Humans have overused resources, which has resulted in the following issues:

Resources and Development Class 10 Notes-Land Use Pattern In India

The land has started to degrade recently as a result of human activity and some natural events. The pace of land degradation has dramatically increased as a result of some activities, including overgrazing, mining, quarrying, and deforestation. Additionally, industrial waste has harmed the quality of the land, particularly in regions with industrial belts. Our natural resources’ water quality has been impacted by land degradation.

We can take certain steps to protect our land and ensure the land degradation rate slows down, such as limiting mining operations, properly disposing of industrial waste, planting shelterbelts, etc.

Resources and Development Class 10 Notes- Soil As A Resource

One of the valuable renewable natural resources is soil. Every centimeter of soil is formed over the course of millions of years. Temperature, the operation of flowing water, wind, glaciers, the activity of decomposers, parent rock, chemical, and organic changes, etc., are only a few of the variables that affect how soil is formed.

Due to a variety of natural circumstances, India has several varieties of soil, each with its own thickness, colour, texture, chemical make-up, and physical characteristics.

The soil of the Northern Plains is alluvial. Deposits from the Himalayan rivers Indus, Ganga, and Brahmaputra result in the formation of alluvial soil.

Cotton crops are renowned for flourishing on the black soil. It is made of lava and is primarily found in the Deccan trap. It has more clay and is renowned for its ability to hold moisture.

Areas with less rainfall are more likely to have this sort of soil. The soil is reddish because it contains iron and is made of igneous rock. When the soil is moistened, its colour changes from red to yellow.

Acidic laterite soil is found primarily in the southern States of Maharashtra and originates in tropical and subtropical climates where high rainfall causes significant leaching. In order to develop tea and coffee, it is highly beneficial.

In general, soil lacks humus and moisture and is sandy and salty in nature. As you dig deeper, the soil turns from red to brown and has a high calcium concentration.

Specifically in the hills and mountains, where the soil is loamy and silty, as well as on the upper slopes, this is found. It has a low humus content and is acidic in nature.

Watching Adda247 YouTube video on this chapter will help you learn more. /

Conservation Of The Soil And Soil Erosion

Both natural and human activity can cause soil erosion. As high soil erosion will result in numerous issues, it needs to be controlled. By employing soil conservation techniques, soil erosion can be reduced.

There are several ways to preserve soil, some of them are as follows:

Ques. Write two types of renewable resources and give one example of each type.

Ans: Two types of renewable resources are as follows:

Ques. What do you understand by a ‘Resource’? Give examples.

Ans: Everything available in our environment which can be used to satisfy our needs, is called a resource. It should be technologically accessible, economically feasible and culturally acceptable. Only then, it can be termed as a ‘Resource’.

Ques. What types of soil erosion are there?

Ques. “India has enormous diversity in the availability of resources.” Name four varied regions to justify this statement.

Ans: There are regions which are rich or self-sufficient in certain types of resources and there are areas that are deficient or have acute shortage of some vital resources.

Ques. Mention the factors that determine land use in India.

Ans: The use of land is determined both by physical factors such as topography, climate, soil types as well as human factors such as population density, technological capability and culture and traditions. The land under permanent pasture has also decreased.

The pattern of net sown area varies greatly from one state to another. It is over 80 per cent of the total area in Punjab and Haryana and less than 10 per cent in Arunachal Pradesh, Mizoram, Manipur and Andaman Nicobar Islands.

Forest area in the country is far lower than the desired 33 per cent of geographical area, which was stated in the National Forest Policy (1952). A part of the land is termed as waste land and land put to other non-agricultural uses.

Ques. Explain briefly about the ‘Agenda 21’?

Ans: Rio de Janeiro Earth Summit, held in June 1992 was a global submit where more than 100 heads of states met in Rio de Janeiro in Brazil, for the first International Earth Summit. The Summit was convened for addressing urgent problems of environmental protection and socioeconomic development at the global level. A declaration was signed by the global leaders on Global Climatic Change and Biological Diversity. The Rio Convention endorsed the global Forest Principles and adopted Agenda 21 for achieving Sustainable Development in the 21st century. It is aimed at achieving global sustainable development.

It is an agenda that aims at combating environmental damage, poverty, disease through global co-operation on common interests, mutual needs and shared responsibilities. One major objective of the Agenda 21 is that every local government should draw its own local Agenda 21.

Ans: Planning is the widely accepted strategy for judicious use of resources as there are certain areas that have sufficient resources while others don’t have enough.

For example, the states of Jharkhand, Chhattisgarh and Madhya Pradesh are rich in minerals and coal deposits. Arunachal Pradesh has an abundance of water resources but lacks in infrastructural development. The state of Rajasthan is very well endowed with solar and wind energy but lacks in water resources. The cold desert of Ladakh is isolated from the rest of the country. It has an extraordinarily rich cultural heritage but it is deficient in water, infrastructure, and some vital minerals.

Resource planning is a complex process that involves:

(i) Identification and inventory of resources across the regions of the country. This involves surveying, mapping and qualitative and quantitative estimation and measurement of the resources.

Ans: Land degradation is a process through which the land becomes unsuitable for agricultural activities. The following human activities are responsible for land degradation:

(i) Mining: Mining sites are abandoned after excavation work is complete leaving deep scars and traces of over burdening. In states like Jharkhand, Chhattisgarh, Madhya Pradesh and Odisha deforestation due to mining have caused severe land degradation.

(ii) Overgrazing: Overgrazing occurs when plants are exposed to intensive grazing for extended periods of time, or without sufficient recovery periods. In states like Gujarat, Rajasthan, Madhya Pradesh and Maharashtra overgrazing is one of the main reasons for land degradation.

(iii) Over irrigation: In states of Punjab, Haryana and western Uttar Pradesh, over irrigation is responsible for land degradation. It occurs due to water logging that leads to increase in salinity and alkalinity in the soil.

(iv) Mineral processing: The mineral processing like grinding of limestone for cement industry and calcite and soapstone for ceramic industry generate huge quantity of dust in the atmosphere. It retards the process of infiltration of water into the soil after it settles down on the land.

(v) Industrial effluents as waste have also become a major source of land degradation in many parts of the country.

Ans. The aforementioned claim is untrue since resources are a result of human activity; people turn materials found in our environment into resources and then use them. They are not free gifts from nature.

Ques 2. What results in resource depletion?

Ques 3. Why are natural resources necessary?

Ans. Food, fuel, and raw materials for the manufacture of commodities are all made with the help of natural resources.

Ques 4. What does sustainability look like in the real world?

Ans. Using rags or dishcloths rather than paper towels or wipes to clean up spills.

Ques 5. What effects does sustainability have on people’s lives?

Ans. Renewable resources include trees. It is possible to establish, raise, and harvest trees for their wood.

Ques 7. What would happen if we didn’t prioritise sustainable development?

Ques 8. Why is resource management necessary?

Ans. To provide resource managers more control over the delivery, resource management makes sure they have on-demand, real-time visibility into people and other resources.

Ques 9. What hinders the advancement of sustainability?

Ans. The main obstacle to the implementation of sustainable development is the use of insufficient economic, social, and environmental methodologies for policies, plans, and projects.