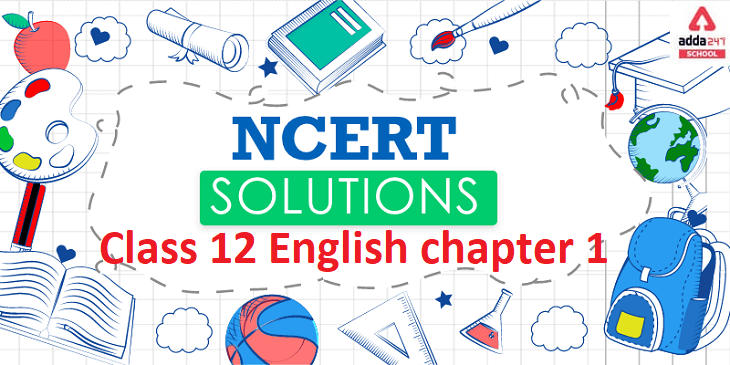 While studying English and learning the various chapters, one thing that is important is to know all the answers to the question which are asked in the text. So, here ADDA 247 has brought forth the entire range of solutions from the book Flamingo by our Subject Matter Expert, who has a wide domain of knowledge and has tried to personalize the answers in the best possible way. THE LAST LESSON is the first chapter from the Book “Flamingo” for children of Standard 12, who are studying under the CBSE Curriculum.

NCERT Solutions for Class 12 English Chapter 1 comprises one Chapter- THE LAST LESSON designed by the experts at Adda 247.  These solutions, which are reliable and accurate are written using simple English that will help students to prepare well and face the exam with full confidence. The NCERT Solutions of Class 12 for English have been solved by our team of subject-matter experts to provide the best-in-class solutions for students.

Q1. The people in this story suddenly realise how precious their language is to them. What shows you this? Why does this happen?

Answer: The French districts of Alsace and Lorraine had fallen into Prussian hands, according to the story. As a result, they received an order from Berlin mandating that only German be taught in Alsace and Lorraine schools. It was at that point that they all realized the importance of their language. The usual commotion at school was replaced by the peace of Sunday church. The students’ sincerity was evident by the fact that they all began working quietly. The only sound in the room was the scratching of pens across the paper. Even the villagers came in and sat quietly as students in the class. Everyone appeared to be depressed. M. Hamel, who was otherwise disliked, instilled in the students a sense of regret. Franz regretted not paying close attention to him, whereas M. Hamel, who was heartbroken at the prospect of leaving, had never explained everything with such patience. He almost seemed to want to tell them everything he knew before leaving. In his words, he adequately captured the mood. ‘We all have a lot of things to be ashamed of.’

Q2. Franz thinks, “Will they make them sing in German, even the pigeons?” What could this mean?

Answer: Franz’s question about whether pigeons can sing in German demonstrates that humans can impose their will on other humans but cannot impose it on nature. It suggests that human power is always limited. They cannot have complete control over the world. Similarly, Prussians can control their schools and learning patterns, but they cannot kill their pride in their country and language.

Talking About The Text:

Q1. “When a people are enslaved, as long as they hold fast to their language it is as if they had the key to their prison.” Can you think of examples in history where a conquered people had their language taken away from them or had a language imposed on them?

Answer: “When people are enslaved, as long as they hold fast to their language it is as if they had the key to their prison.” Examples of conquered people having their language taken away or having a language imposed on them can be found throughout history.

Q2. What happens to a linguistic minority in a state? How do you think they can keep their language alive? For example:

Answer: In any state, the linguistic minority is easily identified and faces the same discrimination as religious, social, or ethnic minorities. However, there is a significant disparity between the treatment meted out and the level of acceptance displayed by the majority community in that region. Some cities, such as Delhi and Mumbai, have a cosmopolitan outlook.

The linguistic minority attempts to preserve its identity through intimate contact, interaction, and language preservation in social gatherings, family functions, and regional festivals. Adherence to social customs and traditions in family gatherings and women’s meetings fosters unity among members of the linguistic minority. In a nutshell, they have built a mini-Punjab in Bangalore, a mini-Chennai in Mumbai, a mini-Bangalore in Delhi, and a mini-Surat in Kolkata.

Q3. Is it possible to carry pride in one’s language too far? Do you know what ‘linguistic chauvinism’ means?

Answer: People often take quite enough pride in their native tongues and repress others. This is incorrect as we should treat all languages and cultures equally.

Linguistic chauvinism refers to a person’s excessive pride in their native language. Being overly aggressive and fanatical about one’s language is referred to as carrying pride.

Q1. English is a language that contains words from many other languages. This inclusiveness is one of the reasons it is now a world language, For example:

Find out the origins of the following words.

Tycoon – It originated from the Japanese word “taikun”, which means great lord.

Barbecue – It originated from the Caribbean word “barbacoa”, which refers to a wooden structure used to cook.

Meat – It has Germanic origins.

Zero – The word zero has French origins but it originated from Arabic ‘cipher’.

Tulip – It originated from French but has its origins in Persian dulband means flower shaped turban.

Veranda – It originated from Hindi ‘baranda’ which means railing.

Logo – It has its origins in Greek logos means ‘imprint’

(a) “What a thunderclap these words were to me!”

(b) “When a people are enslaved, as long as they hold fast to their language it is as if they had the key to their prison”

(i) do not lose their language.

(ii) are attached to their language.

(c) Don’t go so fast, you will get to your school in plenty of time.

You will get to your school

(a) had grown physically taller

(c) stood on the chair

(a) (ii) unexpected and quite startling.

(b) (ii) are attached to their language.

Pick out five sentences from the story with this form of the verb and say why this form has been used.

Five sentences in the past perfect tense:

In this sentence, first he got scared and then he tried to get to the desk without being seen.

In this sentence, he had to open the door before getting in.

In this sentence, they had their key to prison before they were enslaved.

This tense has been used because in the story, the incidents are happening at two different points of time. In this sentence, he had the courage and so, he listened to the lesson to the end.

On 05 – 09 – 2017, the school will host an essay competition. “The Qualities I Admire in My Favorite Teacher” is the topic. All interested students should contact the undersigned by September 2, 2017.

In this chapter, the writer Alphonse Daudet has written the story, Last Lesson. The thematic context of the prose deals with patriotism, freedom, and the love for one’s own mother tongue through the story of the Prussian invasion of a French district Alsace and Lorraine.

The entire PDF is made available to you and the answers are written promptly about which you can stay rest assured.

Answer.1) Yes, all subjects catering to the CBSE syllabus and their solutions are available by Adda 247

Ans.2) The NCERT Solutions for Class 12 English Chapter 1 are prepared in a CBSE specific format to score good marks in the board exam. The solutions created are 100% accurate as per the exam pattern and marks weightage designed by the prescribed board. By using the NCERT Solutions from ADDA 247, students will be able to understand the concepts effectively and score well in the board exams. Students can download the solutions and answer the textbook questions without any difficulty. It also helps students to get their doubts cleared immediately without carrying it for a longer period.

Ans.3) To score high marks in the board exams students should choose the study material which is completely based on the CBSE guidelines. The syllabus for the CBSE board is changed on a regular basis to keep the students updated with the concepts which are important in the current trends. So, the subject experts at Adda 247 provide the NCERT Solutions for all the chapters present in the NCERT textbook. Each and every question is solved in a clear and interactive way to help students score well in the board exams.