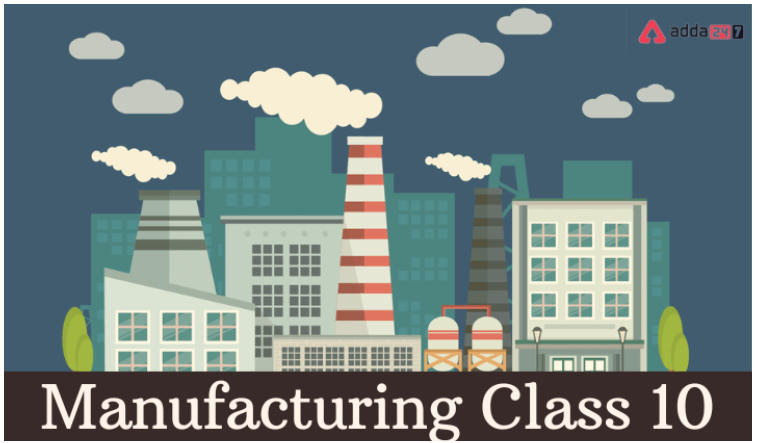 Manufacturing is the process of producing items in large quantities from less valuable basic resources. Manufacturing is seen as a secondary activity since it transforms raw materials, such as cotton fibre, into completed things (like textiles)

The manufacturing sector is considered the backbone of development due to the following reasons:

Learn more about this topic with our YouTube video

The trend of growth rate in manufacturing over the last decade has been around 7 per cent per annum.

Industrial locations are influenced by the availability of:

Manufacturing activity tends to locate at the most appropriate place where all the factors of industrial location are either available or can be arranged at a lower cost. The figure below shows the industry market linkage.

Cotton, jute, silk, woollen textiles, sugar and edible oil, etc. industries are based on agricultural raw materials. Let’s know about each of them, one by one.

It is the only industry in India, which is self-reliant and complete in the value chain i.e., from raw material to the highest value added products. It contributes to industrial production, employment generation and foreign exchange earnings.

This industry has close links with agriculture and provides a living to farmers, cotton boll pluckers and workers engaged in ginning, spinning, weaving, dyeing, designing, packaging, tailoring and sewing. It supports many other industries, such as, chemicals and dyes, packaging materials and engineering works.

India is the largest producer of raw jute and jute goods. Most of the mills are located in West Bengal, mainly along the banks of the Hugli river.

India stands second as a world producer of sugar but occupies the first place in the production of Gur and Khandsari. This industry is seasonal in nature.

Iron and steel is the basic industry as all the other industries – heavy, medium and light, depend on it for their machinery. lt is considered as a heavy industry because all the raw materials, as well as finished goods, are heavy and bulky entailing heavy transportation costs.

India is an important iron and steel producing country in the world yet, we are not able to perform to our full potential largely due to:

Aluminium Smelting is the second most important metallurgical industry in India. It is used to manufacture aircraft, utensils and wires. Bauxite is the raw material used in the smelters.

Aluminium Smelting has gained popularity as a substitute for steel, copper, zinc and lead in a number of industries. It exhibits the following properties:

growth has been recorded in both inorganic and organic sectors.

Cement is essential for construction activity such as building houses, factories, bridges, roads, airports, dams and for other commercial establishments. This industry requires bulky and heavy raw materials like limestone, silica and gypsum.

The electronics industry covers a wide range of products from transistor sets to television, telephones, cellular telecom, telephone exchange, radars, computers and many other equipment required by the telecommunication industry. This industry has generated employment in India. Bengaluru is known as the electronic capital of India.

Industries are responsible for 4 types of pollution:

Air pollution is caused by the presence of a high proportion of undesirable gases, such as sulphur dioxide and carbon monoxide. Smoke is emitted by chemical and paper factories, brick kilns, refineries and smelting plants, and burning of fossil fuels leads to air pollution. It adversely affects human health, animals, plants, buildings and the atmosphere as a whole.

Water pollution is caused by organic and inorganic industrial wastes and effluents discharged into rivers. The industries which are mainly responsible for water pollution are paper, pulp, chemical, textile and dyeing, petroleum refineries, tanneries and electroplating industries.

Thermal pollution of water occurs when hot water from factories and thermal plants is drained into rivers and ponds before cooling.

Noise pollution is the propagation of noise with harmful impact on the activity of human or animal life. It results in irritation, anger, causing hearing impairment, increased heart rate and blood pressure.

Here are some ways through which industrial pollution can be reduced:

What is manufacturing? To which sector of economy does it belong?

“The economic strength of a country is measured by the development of manufacturing industries”. Support the statement with arguments. (2016 D)

Ans. Manufacturing. Production of goods in large quantities after processing from raw materials to more valuable products is called manufacturing.

Manufacturing belongs to the secondary sector in which the primary materials are processed and converted into finished goods. The economic strength of a country is measured by the development of manufacturing industries.

Question 2. Write about the importance of the ‘manufacturing sector’ for our nation.

Or, “Manufacturing industry is considered the backbone of economic development of India.” Give reasons. (2015 OD, 2011 D)

Question 3 “Agriculture and industry are not exclusive of each other, but move hand in hand.” Give arguments in favour of this statement. (2013 D)

Or, Explain with examples how industries in India have given a major boost to agriculture. (2015 D, 2012 OD)

Ans. Agriculture and industry in India are inseparable or interdependent on each other:

Question 4 Write the contribution and present growth rate of the manufacturing sector in the national economy. Suggest measures to increase the industrial growth rate. (2011 OD)

Ans. After industrial activity starts, urbanisation follows. Some industries are located in and around the cities. Thus industrialisation and urbanisation go hand in hand. Cities provide markets, services such as banking, insurance, transport, labour, consultants and financial advice, etc. to industries.

Question 7 What are ‘agglomeration economies’ in the industrial context?

Ans. Many industries tend to come together to make use of the advantages offered by the urban centres known as ‘agglomeration economies’. Gradually, a large industrial agglomeration or clustering takes place around an urban centre.

Question 8 State any five basis on which industries are classified.

Question 9 Classify industries on the basis of capital investment. How are they different from one another? Explain with examples. (2016 D)

Ans. On the basis of capital investment industries can be classified as:

Question 10 Classify industries on the basis of source of raw material. How are they different from each other? (2016 OD)

Ans. On the basis of sources of raw material industries are classified as:

(i) Agro based industries;

Question 11. List the locations of the majority of manufacturing facilities prior to independence.

Question 12. What are the criteria for an optimal industrial location? Name anyone.

Answer- Availability of raw materials is the answer.

Question 14. “Agriculture and industry are complementary to one another”. Describe with examples.

How do businesses support the agricultural sector?

Answer-It is accurate to say that industry and agriculture coexist.

Agro-based businesses like cotton, woollen, jute and edible oil rely on agriculture for their basic resources.

In exchange, these businesses sell farmers irrigation pumps, fertiliser, pesticides, PVC pipes, and a variety of other goods.

As a result, agro-industries have increased agriculture’s output and improved the efficiency of its production methods.

Question 15. Where in the pre-independence era where the majority of the manufacturing facilities located? What was the outcome?

Answer- Before independence, manufacturing facilities were positioned with international trade. Chennai, Kolkata, and Mumbai were among these locations.

Result: As a result of the manufacturing sectors being located in Mumbai, Kolkata, Chennai, and other locations, certain pockets of industrially developed metropolitan centres with a sizable agricultural and rural hinterland have emerged.

In Mumbai, the first cotton textile mill was built in 1854.

In 1859, the first jute mill was built in Rishra, a town close to Kolkata.

Question 16. Describe the iron and steel industry in terms of its characteristics, applications, and production process.

Answer- (1) Basic industry: The iron and steel sector is fundamental since it provides the machinery for all other sectors of the economy.

(2) Production and heavy industry: The heavy industry requires expensive transportation due to the weight and bulk of all the raw materials and final goods.

Limestone, coking coal, and iron ore are needed in an approximate 4:2:1 ratio.

(3) To harden the steel, some manganese is also necessary. Steel is used to make a wide range of engineering products, building materials, defence, medical, telecommunication, scientific equipment, and consumer goods.

Question 1 What is the function of an industry?

Ans. The production of goods is the main function of any industry.

Question 2 What are the types of industry?

Question 3 Which is the state that has the maximum number of factories in India?

Ans. Tamil Nadu is the state in India that has the maximum number of factories.

Question 4 What are the important topics in manufacturing industries?

Question 5 What is the importance of manufacturing industries? Very short answer?

Ans. Manufacturing industries not only help in modernising agriculture, they also reduce the heavy dependence of people on agricultural income by providing them jobs in secondary and tertiary sectors. Industrial development is a precondition for eradication of unemployment and poverty from our country.

Question 6 Why is iron and steel called a basic industry?

Question 7 What is class 10 Ncert manufacturing?

Answer-The manufacture of goods in vast quantities following the transformation of basic materials into more valuable things is known as manufacturing.

Question 8 What role does manufacturing play?

Answer- It serves as the foundation for industrial growth. By offering employment opportunities in the secondary sector, it aids in reducing people’s reliance on the primary sector.

Question 9 What are the primary manufacturing activities?

Answer-The sourcing of raw materials, preparatory processing, production, and assembly, quality control and testing, labelling and packing, distribution/transportation, and post-sale follow-up are all processes in a manufacturing operation.

Question 10 What exactly does manufacturing entail?

Ans. A manufacturing institution is described as a production facility that is physically or chemically transforming a product into a finished good that can be used by the consumer.

Question 11 What part does manufacturing play in economic growth?

Ans. There are unique chances for capital accumulation in the manufacturing industry.l