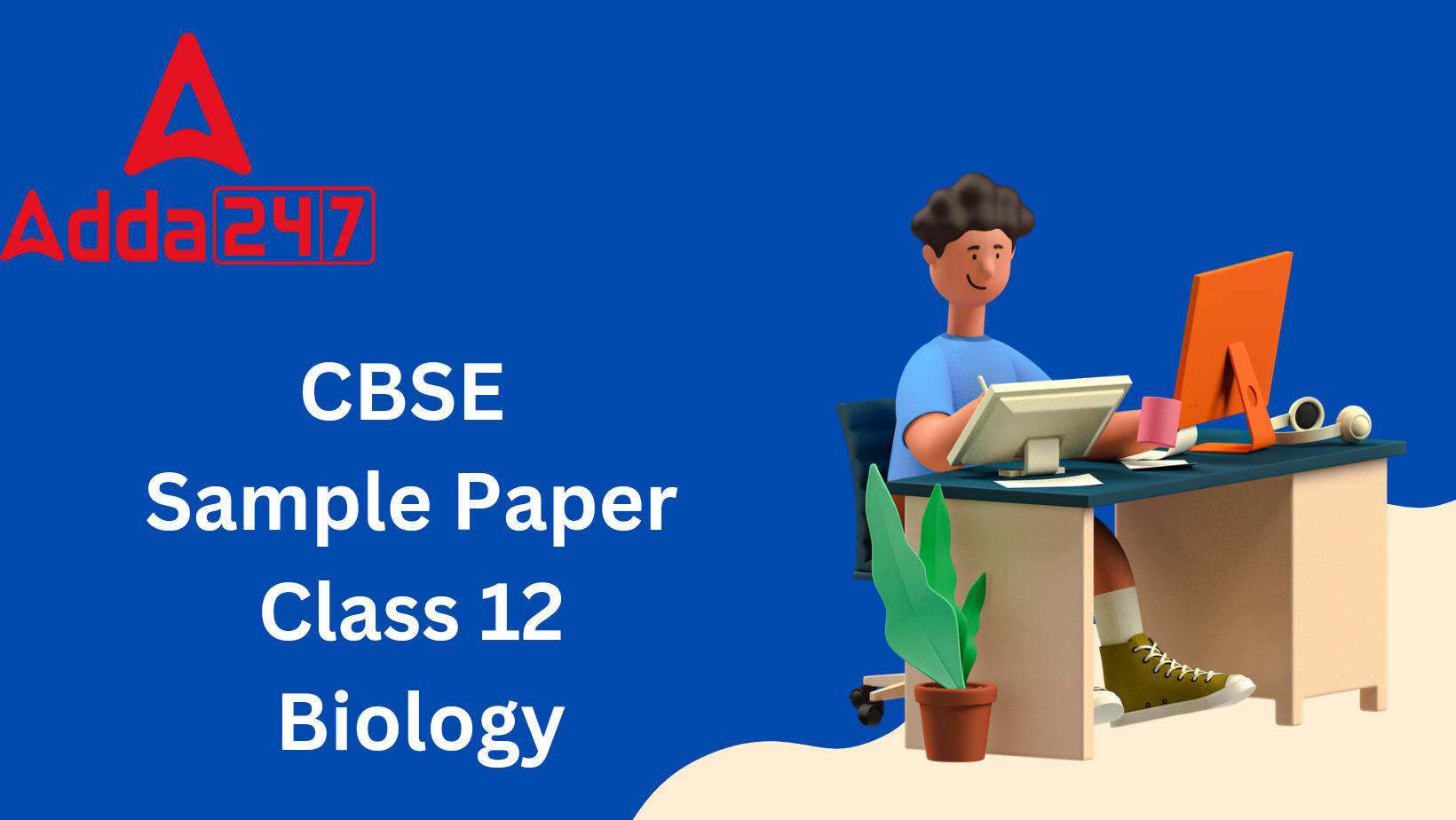 Q.1.An infertile couple was advised to undergo In vitro fertilization by the doctor. Out of the options given below, select the correct stage for transfer to the fallopian tube for successful results?
(a) Zygote only
(b) Zygote or early embryo upto 8 blastomeres
(c) Embryos with more than 8 blastomeres
(d) Blastocyst Stage

Q.2.Given below are four contraceptive methods and their modes of action. Select the correct match:

Q.5. Apis mellifera are killer bees possessing toxic bee venom. Identify the treatment and the type of immunity developed from the given table to treat a person against the venom of this bee.

Q.6. Interferons are most effective in making non-infected cells resistant against the spread of which of the following diseases in humans?
(a) ascariasis
(b) ringworm
(c) amoebiasis
(d) AIDS
Q.7. Which of the following water samples in the table given below, will have a higher concentration of organic matter?

8. The figure below shows the structure of a plasmid. 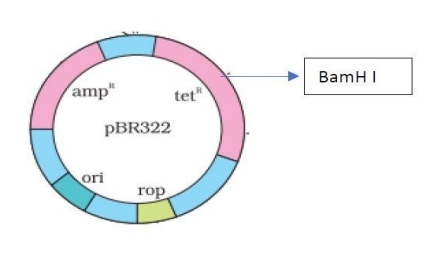 A foreign DNA was ligated at BamH1. The transformants were then grown in a medium containing antibiotics tetracycline and ampicillin.Choose the correct observation for the growth of bacterial colonies from the given
table

Q.9. Swathi was growing a bacterial colony in a culture flask under ideal laboratory conditions where the resources are replenished. Which of the following equations will represent the growth in this case?
(Where population size is N, birth rate is b, death rate is d, unit time period is t, and carrying capacity is K).
(a) dN/dt = KN
(b) dN/dt = r N
(c) dN/dt = r N(K-N/K)
(d) dN/dt = r N(K+N/K)

Q.10. Sea Anemone gets attached to the surface of the hermit crab. The kind of population interaction exhibited in this case is
(a) amensalism.
(b) commensalism.
(c) mutualism.
(d) parasitism

Q.11. Which of the following food chains is the major conduit for energy flow in terrestrial and aquatic ecosystems respectively?

Q.13. Assertion: Apomictic embryos are genetically identical to the parent plant.
Reason: Apomixis is the production of seeds without fertilization.

Q.14. Assertion: When white eyed, yellow bodied Drosophila females were hybridized with red eyed, brown-bodied males; and F1 progeny was intercrossed, F2 ratio deviated from 9 : 3 : 3 : 1.
Reason: When two genes in a dihybrid are on the same chromosome, the proportion of parental gene combinations is much higher than the non-parental type.

Q.15. Assertion: Functional ADA cDNA genes must be inserted in the lymphocytes at the early embryonic stage.
Reason: Cells in the embryonic stage are mortal, differentiated and easy to manipulate. 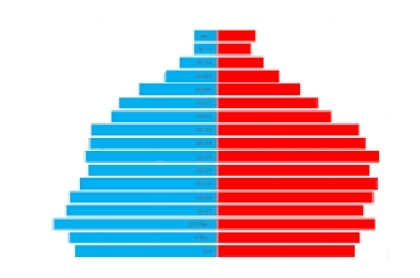 Q.17. In the figure given below, parts A and B show the level of hormones which influence the menstrual cycle. Study the figure and answer the questions that follow:

a) Name the organs which secrete the hormones represented in parts A and B.
(b) State the impact of the hormones in part B on the uterus of the human female during 6 to 15 days of menstrual cycle?
Q.18. A true breeding pea plant, homozygous dominant for inflated green podsis crossed with another pea plant with constricted yellow pods (ffgg). With the help of punnett square show the above cross and mention the results obtained phenotypically and genotypically in F1 generation?

Q.19. During a field trip, one of your friend in the group suddenly became unwell, she started sneezing and had trouble in breathing. Name and explain the term associated with such sudden responses. What would
the doctor recommend for relief?

Q.20. CTTAAG
GAATTC
(a) What are such sequences called? Name the enzyme used that recognizes
such nucleotide sequences.
(b) What is their significance in biotechnology?
Q.21. (a) Given below is a pyramid of biomass in an ecosystem where each bar represents the standing crop available in the trophic level. With the help of an example explain the conditions where this kind of pyramid is possible in nature?

Q.22. Explain the functions of the following structures in the human male reproductive system.
(a) Scrotum
(b) Leydig cells
(c) Male accessory glands
Q.23. State the agent(s) which helps in pollinating in the following plants. Explain the
adaptations in these plants to ensure pollination:
(a) Corn
(b) Water hyacinth
(c) Vallisneria
Q.24. (a) Identify the polarity of x to x’ in the diagram below and mention how many more amino acids are expected to be added to this polypeptide chain. 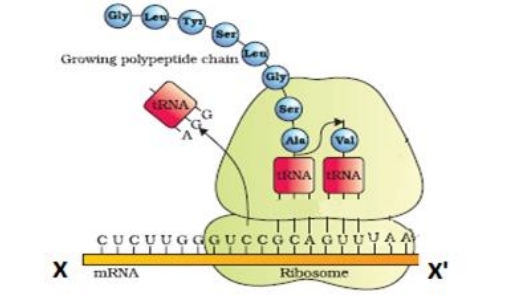 (b) Mention the codon and anticodon for alanine.
(c) Why are some untranslated sequences of bases seen in mRNA coding for a polypeptide? Where exactly are they present on mRNA?
Q.25. (a) How is Hardy-Weinberg’s expression “(p²+ 2pq+q²) = 1”derived?
(b) List any two factors that can disturb the genetic equilibrium.

Q.26. Highlight the structural importance of an antibody molecule with a diagram. Name the four types of antibodies found to give a humoral immune response, mentioning the functions of two of them you have studied.
OR
(a) Explain the Life cycle of Plasmodium starting from its entry in the body of female Anopheles till the completion of its life cycle in humans.
(b) Explain the cause of periodic recurrence of chill and high fever during malarial attack in humans.
Q.27. Carefully observe the given picture. A mixture of DNA with fragments ranging from 200 base pairs to 2500 base pairs was electrophoresed on agarose gel with the following arrangement. 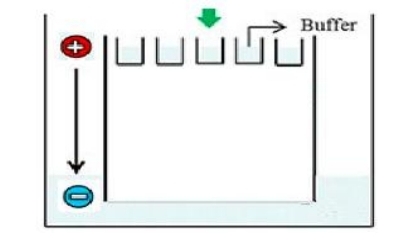 (a) What result will be obtained on staining with ethidium bromide? Explain with reason.
(b) The above set-up was modified and a band with 250 base pairs was obtained at X. 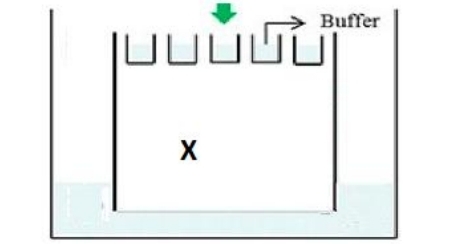 What change(s) were made to the previous design to obtain a band at X? Why did the band appear at the position X?
Q.28 (a) There was loss of biodiversity in an ecosystem due to a new construction project in that area. What would be its impact on the ecosystem? State any three.
(b) List any three major causes of loss of biodiversity?

Q.no 29 and 30 are case based questions. Each question has subparts with internal choice in one subpart.
Q.29. Study the Pedigree chart given below and answer the questions that follow: 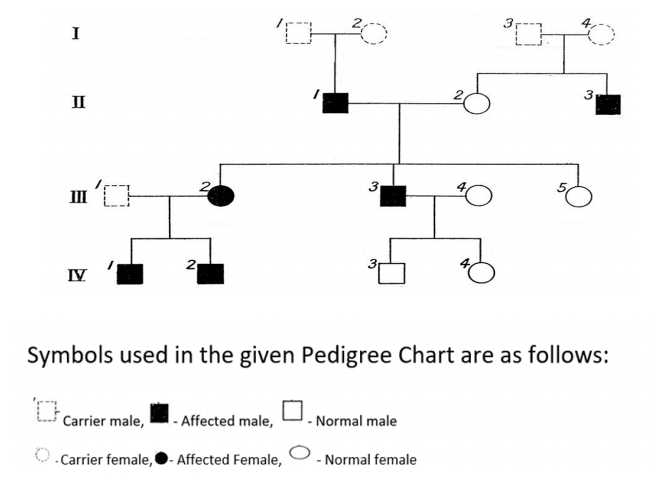 (c) Give the genotype of offsprings 1,2,3 and 4 in III generation.
OR
(c) In this type of inheritance pattern, out of male and female children which one has less probability of receiving the trait from the parents. Give a reason.
Q.30. The data below shows the concentration of nicotine smoked by a smoker taking 10 puffs/ minute. 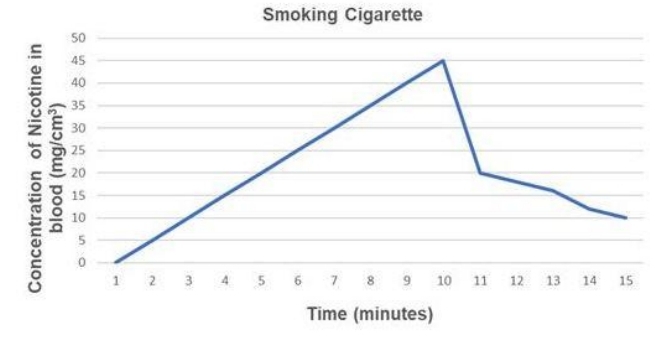 Q.31. Trace the events from copulation to zygote formation in a human female.
OR
Trace the development of a megaspore mother cell to the formation of mature embryo sac in a flowering plant.
Q.32. Observe the segment of mRNA given below.

(a) Explain and illustrate the steps involved to make fully processed hnRNA?
(b) Gene encoding RNA Polymerase I and III have been affected by mutation in a cell. Explain its impact on the synthesis of polypeptide, stating reasons.
OR
Study the schematic representation of the genes involved in the lac operon given below and answer the questions that follow:

(a) The active site of enzyme permease present in the cell membrane of a bacterium has been blocked by an inhibitor, how will it affect the lac operon?
(b) The protein produced by the i gene has become abnormal due to unknown reasons. Explain its impact on lactose metabolism stating the reason.
(c) If the nutrient medium for the bacteria contains only galactose; will operon be expressed? Justify your answer.

Q.33. Oil spill is a major environmental issue. It has been found that different strains of Pseudomonas bacteria have genes to break down the four major groups of hydrocarbons in oil. Trials are underway to use different biotechnological tools to incorporate these genes and create a genetically engineered strain of Pseudomonas
– a ‘super-bug’, to break down the four major groups of hydrocarbons in oil. Such bacteria might be sprayed onto surfaces polluted with oil to clean thin films of oil.
(a)  List two advantages of using bacteria for such biotechnological studies?
(b) For amplification of the gene of interest PCR was carried out. The PCR was run with the help of polymerase which was functional only at a very low temperature. How will this impact the efficiency of the PCR? Justify.
(c) If such bacteria are sprayed on water bodies with oil spills, how will this have a positive or negative effect on the environment? Discuss.
OR
Insects in the Lepidopteran group lay eggs on maize crops. The larvae on hatching feed on maize leaf and tender cob. In order to arrest the spread of three such Lepidopteran pests, Bt maize crops were introduced in an experimental field.
A study was carried out to see which of the three species of lepidopteran pests was most susceptible to Bt genes and its product.

The lepidopteran pests were allowed to feed on the same Bt-maize crops grown on 5 fields (A-E).
The graph below shows the leaf area damaged by these three pests after feeding on maize leaves for five days. 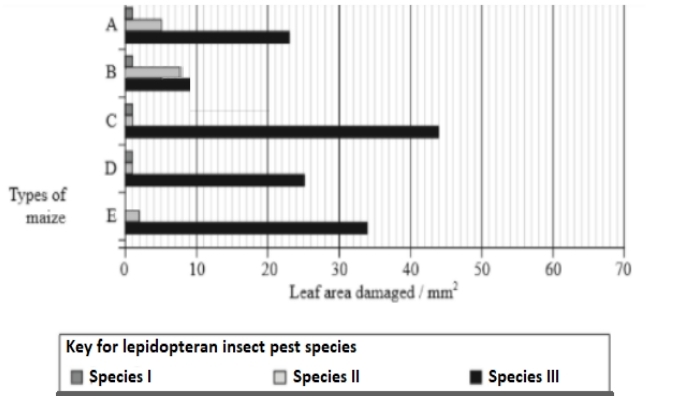 Q. Where can I get CBSE Class 12 Biology Sample Question Paper 2023?