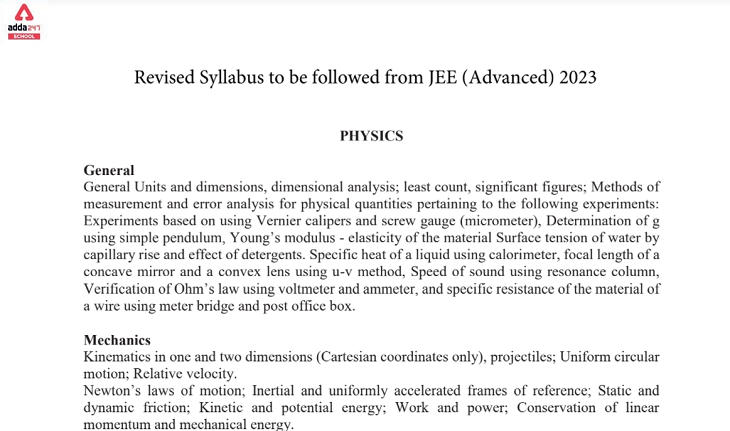 JEE Advanced 2023- Revised syllabus for IIT entrance exam: The JEE Advanced syllabus for admission to the Indian Institutes of Technology (IIT) has been updated for the year 2023. A number of approximately around 2.5 lakh are the top applicants who pass the Joint Entrance Examination Main, or JEE Main Only they are eligible to take the advanced exam. Only then are they eligible to apply for IIT admissions. Students who plan to take the JEE advanced exam in 2023 should review the updated syllabus on the official website. Jeeadv.ac.in is the official website.

On October 3, 2021, the exam was held for the year 2021. On October 15, 2021, the JEE Advanced 2021 result of the same was also released. The Revised syllabus to be followed from JEE (Advanced) 2023 has been announced, according to the official notification of JEE Advanced Syllabus 2023.
General Units and Dimensions, Dimensional Analysis; Least Count, Significant Figures; Methods of measurement and error analysis for physical quantities relevant to some of the experiments are some of the newly added physics topics. Experiments using Vernier callipers and a screw gauge (micrometre), as well as g determination with a simple pendulum Young’s modulus is a measure of a material’s elasticity. The experiments under the Methods of measurement and error analysis for physical quantities include surface tension of water through capillary rise and the influence of detergents. The updated syllabus includes covers the specific heat of a liquid using a calorimeter, as well as the focal length of a concave mirror and a convex lens.
The states of matter are covered in the Chemistry section. The new syllabus includes topics such as gases and liquids, atomic structure, chemical bonding, and Molecular Structure.
Sets, Relations, and Functions, Algebra, and Mathetics are among the topics covered in the Mathematics section for the Joint Entrance Examination 2023.

Here is the updated syllabus for JEE 2023:

Name of the subjects- Name of topics

The following are the requirements for taking the JEE (Advanced) exam:

Kharagpur had the first Indian Institute of Technology. The Indian Institute of Technology, Kharagpur, was founded in 1951, and students were admitted based on their academic achievements in the years preceding 1961. It was followed by an interview that took place in a number of cities around the country. In 1961, the IIT-JEE was first held.
The English test was no longer used for evaluation in 1998.

Law of gravitation; Gravitational potential and field; Acceleration due to gravity; Kepler’s law,

Coulomb’s law; Electric field and potential; Electrical potential energy of a system of point charges and of electrical dipoles in a uniform electrostatic field; Electric field lines; Flux of electric field; Gauss’s law and its application in simple cases, such as, to find field due to infinitely long straight wire, uniformly charged infinite plane sheet and uniformly charged thin spherical shell. Capacitance; Parallel plate capacitor with and without dielectrics; Capacitors in series and parallel; Energy stored in a capacitor.

Rectilinear propagation of light; Reflection and refraction at plane and spherical surfaces; Total internal reflection; Deviation and dispersion of light by a prism; Thin lenses; Combinations of mirrors and thin lenses; Magnification.

States of Matter: Gases and Liquids

Classification of Elements and Periodicity in Properties

Oxidation state and trends in chemical reactivity of elements of groups 13-17; anomalous properties of boron, carbon, nitrogen, oxygen, and fluorine with respect to other elements in their respective groups.

Group 18: Chemical properties and uses; compounds of xenon with fluorine and oxygen.

Homologous series; Physical properties (melting points, boiling points and density) and effect of branching on them; Conformations of ethane and butane (Newman projections only); Preparation from alkyl halides and aliphatic carboxylic acids; Reactions: combustion, halogenation (including allylic and benzylic halogenation) and oxidation.

Preparation of: aldehydes and ketones from acid chlorides and nitriles; aldehydes from esters; benzaldehyde from toluene and benzene; Reactions: oxidation, reduction, oxime and hydrazone

Nucleic acids: Chemical composition and structure of DNA and RNA.

Logarithms and their properties, permutations and combinations, binomial theorem for a positive integral index, properties of binomial coefficients.

Inverse trigonometric functions (principal value only) and their elementary properties.

Equations of a parabola, ellipse and hyperbola in standard form, their foci, directrices and eccentricity, parametric equations, equations of tangent and normal.

In June 2005, two possible solutions were proposed: a convergence of the screening test and the All India Engineering Entrance Examination (AIEEE), or a two-tier examination, with ranks from the first tier being used to gain admission to NITs and other engineering colleges across the country in the proposed solution.
Significant adjustments to the examination were made in September 2005, and it now consisted of a single objective test, rather than the previous two-test approach. Candidates in the general category had to achieve at least 60% aggregate marks in the 12th-grade examinations organised by various school boards in India to be eligible for the main examination in the revised examination, which was adopted from 2006 onwards. Candidates from the Scheduled Caste (SC), Scheduled Tribe (ST), and Persons With Disabilities (PwD) groups, on the other hand, need a minimum score of 55%.
With the introduction of a single-stage multiple-choice exam in 2006, the screening exam was phased out, however, later in 2008, the exam was revised again. The Indian Institutes of Technology (IITs) also began providing admission tests in Dubai.

Who is qualified to take the JEE Advanced exam?

Candidates must have passed their 12th Class Board Exams or any equivalent exams to be eligible for JEE Advanced.

What is the average income for a JEE Advanced candidate?

What happens if I don’t pass JEE Advanced?

On your JEE mains result, you will be admitted to engineering institutes.

Is it possible for me to pass JEE in 15 days?

It is extremely challenging to crack JEE Main in 15 days when others need months or years.

Are two years sufficient for JEE?

Two years, from Class 11 to 12, are sufficient for JEE preparation provided the preparation is taken seriously.