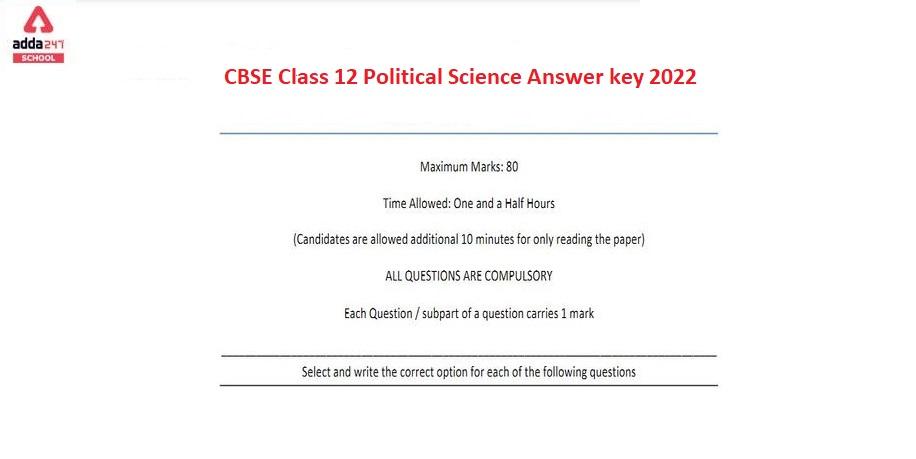 Q.1 Mention any two recommendations of the Mandal Commission?

Recommendations of the Mandal Commission:

(i)Land reforms to improve the conditions of the OBCs.

(ii)Reservation for OBCs in the Government jobs and the educational institution.

Q.2 Analyse any two reasons for the dominance of the Congress Party in the first three general elections.

(i) The Congress was the only party to have organisation spread all over the country.

(ii) It had inherited the legacy of national movement.

Q.3(b) “States have become more powerful as a result of globalisation”. Support the statement.

Globalization has changed the role of the state politically because of strengthened interstate relationships and dependence on one another. States were created to be sovereign but now, due to globalization, often give their sovereignty away to ‘pooling’ (Shaw, 2000: 185) in conventions, contracting, coercion and imposition (Krasner, 1995/6). This has led to increasingly similar jurisdictions across states and to power being seen as economic rather than political progress (Shaw, 2000: 186-187) because states now make political progression and regression together, causing states to become more developmental (Heywood, 2007: 100).

(i) Globalisation results in an erosion of state capacity.

Though called NDA III, the BJP-led coalition of 2014 was largely different from its predecessor coalition governments. Where the previous coalitions were led by one of the national parties, the NDA III coalition was not only steered by a national party, i.e. , BJP it was also dominated by BJP with an absolute majority of its own in Lok Sabha. It was also called a ‘surplus majority coalition’.

Negative Consequences of Globalisation
(i) Leads to loss for the farmers if the expensive seeds from MNC’s fail their crops.
(ii) Fear of loss of livelihood for the small retailers.

Q.8 Describe any two problems between India and Pakistan.

Q.9 “In the recent coalition politics, the alliance of political parties is not based on ideology.” Justify the statement with examples.

The statement is justified because in the new era of coalition politics the emphasis on pragmatic considerations rather than ideological positions and political alliance without ideological agreement: 1. Coalition politics has shifted the focus from ideological differences to power-sharing arrangements. 2. Most parties of NDA did not agree with the ‘Hindutva’ ideology of B JP still they came together to form the government and remained in power also for the full term.

Q. 10 Explain the process of democratisation in Nepal.

The Nepalese democracy movement is a series of political movements from the 20th century to 2008 that advocated the establishment of representative democracy, a multi-party political system and the abolition of monarchy. It has seen three major movements, the Revolution of 1951, Jana Andolan and Loktantra Andolan which ultimately abolished the Shah monarchy, transitioned Nepal towards a republic and reintroduced multi-party bicameral democracy.

The beginning of a national movement for democracy in Nepal was the ousting of the Ranas, the long-established Nepalese royal family, in the mid-20th century which was influenced by ethnic and political developments from the Indian nationalist movement. However, this period of democracy ended in 1960 and the Panchayat system of government was introduced, abolishing recent democratic institutions, banning political parties and restricting some forms of freedom of speech.

Until 2001, the economic and political situation progressed despite corruption, nepotism and the presence of a Maoist insurgency which developed into a nation-wide civil war between the Maoist insurgents and the Government of Nepal. Following the assassination of the Nepalese royal family, King Gyanendra took control of the government and ruled until 2006 through emergency powers enforcing nation-wide oppression of media and civil society Widespread protests headed by a coalition of seven Nepalese Parties alongside the Maoists led to the resignation of the King and the reinstation of the Parliament, the abolishment of monarchy and transitioned Nepal towards a federal republic, marking an end to the country’s civil war.

Q. 12(a) Highlight any three steps taken by China to improve its economy.

China transformed its economic policy and introduced a new market economy. The new policies proved to be remarkable.

1. It created Socio Economic Zones that raised the trade economy of the country.

2. It privatized its agriculture, which overall raised the economic level of the people.

3. It ensured free and open door policy by investing capital and technology from abroad.

4. It modernized its agriculture, science , industry and technology \sector.

Q.12(b) Highlight any three strengths of the European Union as a centre of power.

As a supernational organisation, the European Union bears economic, political diplomacy and military influence as a regional organisation in the following manner:
1. Economic Influence:
(а) Three times larger share in world trade than the US.
(b) Its currency Euro, can pose a threat to the dominance of the US dollar.
(c) The EU functions as an important bloc in the World Trade Organisation (WTO).
2. Political and Diplomatic Influences:
(a) Two members of the EU, Britain and France hold permanent seats in the Security Council to influence the UN policies.
(b) The EU also includes various non-permanent members of the UNSC.
(c) The European Union play an influential role in diplomacy and negotiations except the military force i.e. the EU’s dialogue with China on human rights and environmental degradation is remarkable.
3. Military Influence:
(o) The EU’s combined armed fo^fees are second largest in the world.
(b) Its total expenditure on military is second to the US.
(c) Its two important members— Britain and France also experience nuclear ascends of 550 nuclear warheads.
(d) The EU is world’s second most important source of space and communications technology.

Q.13(a) Highlight any three reasons for the opposition parties to come together to form Janata Party in 1977.

The Janata Party was a political party that was founded as an amalgam of Indian political parties opposed to the Emergency that was imposed between 1975 and 1977 by Prime Minister Indira Gandhi of the Indian National Congress. In the 1977 general election, the party defeated the Congress and Janata leader Morarji Desai became the first non-Congress prime minister in independent modern India’s history.

Economic problems, corruption and the conviction of Gandhi led to widespread protests against the Congress (R) government, which responded by imposing a State of Emergency. The rationale was that of preserving national security.

Q.13(b) Was the declaration of emergency in 1975 necessary? Support your answer with any three suitable arguments.

Yes, the declaration of Emergency in 1975 was necessary.

(i) Internal disturbances and agitations in the country.

(ii) Grave crises had arisen which made the proclamation necessary.

(iii) Political mood of the country had turned hostile.

On this page, you will get the Class 12 Term 2 Political Science Answer Key 2022, check your responses with the answer key, and calculate your marks.

Q. What is the subject code of Political Science Class 12?

The subject code of Class 12 Political Science is 028

Q. What is the exam pattern of Class 12 Term 2 Political Science?