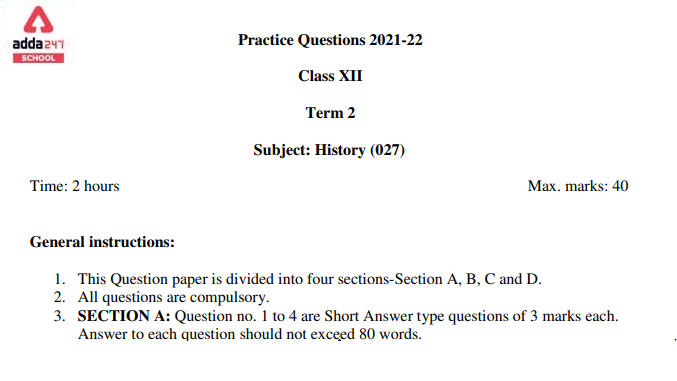 The students appearing in CBSE Term 2 Exam 2022 must solve CBSE Class 12 History Term 2 Practice Questions 2022 given on this page to consolidate their preparation. As exam dates are coming close, the students can assess their preparation for term 2 by solving CBSE Class 12 History Term 2 Practice Questions 2022. Bookmark this page to get all the updates from the Central Board of Secondary Education.

The exam pattern given here is based on the sample paper published by the Central Board of Secondary Education. The Class 12 History Term 2 question paper will be divided into three sections namely Section A, Section B, Section C, and Section D. Check the further details listed below:

Section A: In this section, short answer type questions of 3 marks each will be asked.

Section B: In this section long answer-type questions of 6 marks each will be asked.

Section C: This section consists of case-based questions of 4 marks each.

Section D: This section consists of map-based questions of 2 marks each.

1. Explain the various perspectives that were discussed by the members of the Constituent Assembly from 1946-1950 about the depressed castes.

2. Give three differences between the roles that Zamindars and Jotedars played in the Permanent Settlement revenue system of Bengal of the 18th century.

Describe how the British transformed the Santhals into settled agriculturalists in the 19th century.

3. ‘The mutiny in the sepoy ranks quickly became a rebellion. There was general defiance of all kinds of authority and hierarchy.’ Elaborate with examples of how sepoys organised themselves to rebel against the British in 1857.

4. Explain by giving three examples of how Mahatma Gandhi gained followers and became a mass leader in India.

5. Explain in detail the different steps the Britishers took to suppress the rebellion of 1857.
OR

6. Critically examine how the coming of Mahatma Gandhi changed the nature of the Indian National Movement.

7. List any six expectations which Mughals had from their nobles.

OR
Rajiv bought Akbar Nama at the station while waiting for his train. Describe the various things that Rajiv will learn about Akbar’s empire from this book.

8. Read the passage and answer the questions given below

In court, status was determined by spatial proximity to the king. The place accorded to a courtier by the ruler was a sign of his importance in the eyes of the emperor. Once the emperor sat on the throne, no one was permitted to move from his position or to leave without permission.’
(a) Write the name of a courtier who was part of the Mughal courts. (1)
(b) Explain one key discussion that took place in Mughal courts. (1)
(c) Explain the roles played by the courtiers in the Mughal empire. (2)

10. a) On the given political outline map of India, locate and label ANY ONE of the following with appropriate symbol: 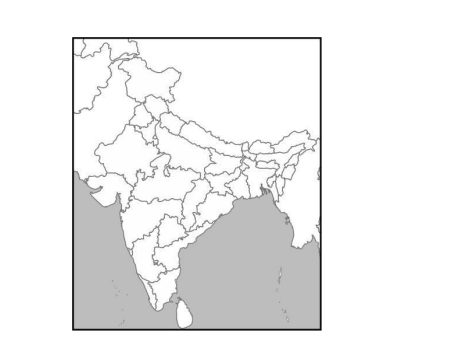 (i) The northern state in India where Rowlatt Satyagraha was adopted by most people of that state.
OR
(ii) The state from where Gandhi started the campaign of Salt Satyagraha and successfully broke the salt law.
b) The map given below highlights a key center marked as P, where a revolt took place in 1857 which was led by Nana Saheb. Identify P. 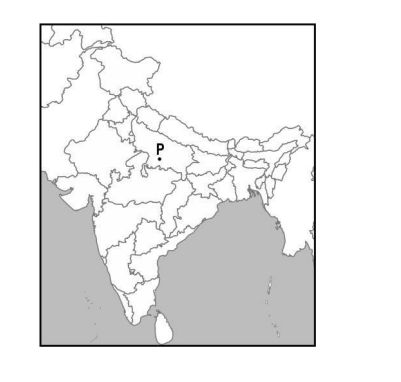 Note: The following questions are for the visually impaired candidates only in lieu of Q. No. 10
10. a) Write the name of one dynasty with whom the Mughals maintained diplomatic relations.
b) Explain why the elites and moneylenders were attacked by the rebels during the 1857 revolt.

You can get CBSE Class 12 History Term 2 Practice Questions 2022 on this page. We have covered the practice question of other subjects on the official website of Adda247 School.