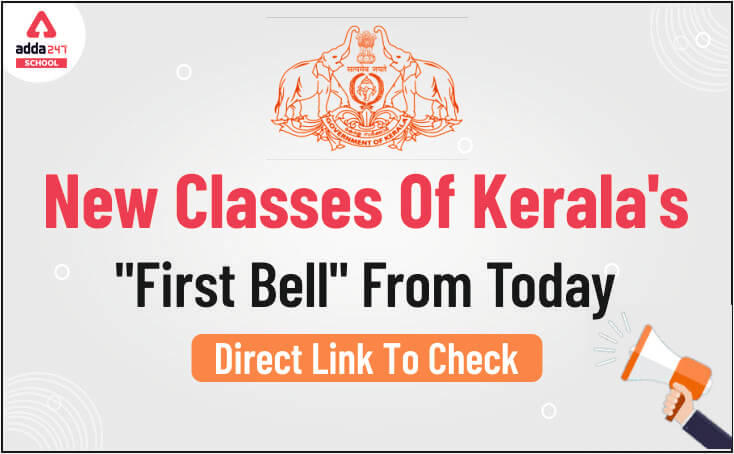 Kerala School: The state government of Kerala will resume the “First Bell” classes from today, with several fresh classes being started. “First bell” is an initiative of the Kerala Government wherein virtual classes are being organized by the Kerala State General Education Department. These virtual classes are conducted on weekdays for students from classes 1st to 12th studying in the government schools of Kerala. The “First Bell” initiative had a trial run from 1st June 2020 because all the schools and educational institutions in the state have been closed since March 2020. The timetable for these classes has been developed by the Kerala Infrastructure and Technology for Education (KITE). Check Also >> ICSE Board Exam 2020 To Be Held In Maharashtra In July 2020, CISCE Board Confirms To Bombay HC

More than 45 Lakh school students across the state have been attending the classes regularly. These virtual classes are being broadcasted on the VICTERS YouTube Channel to enable the students to continue their education, which has otherwise been completely disrupted due to the closure of schools because of the COVID-19 pandemic. The State General Education Department is supervising the virtual class initiative through its website, social media pages, and mobile app. Also, Read | Online Classes: Kerala State Education Department Conducts Online Classes For Economically Weak And Backward Students

From the second phase of the First Bell classes, the government has taken a decision to include English subtitles for classes being conducted in English, Urdu, Arabic, and Sanskrit for the convenience of students. As of now, the VICTERS Mobile App has been downloaded more than 16 lakh times from the Google Play Store, and the subscriber base for the Victers YouTube Channel has reached 10 lakh.

The sale of electronic gadgets in the state has witnessed significant growth. As per an office-bearer of the Traders Organisation in Alappuzha, Mr. Anees Mangalya, “90 percent of the sales happened in the last ten days are either related to education or teaching. There was a flurry of footfall in gadget shops across the state, which was related to the virtual class announcement made by the government.” Check | New Education Policy: Sports To Be Included as an Integral Part of The Curriculum – Sports Minister

In areas where internet connectivity is poor, political groups, as well as non-government groups, have come forward to help the students. They have collected and distributed television sets for the students. As per an IUML Executive, “In our area, in Aliparamba panchayat, we were able to gather and distribute more than 20 Television sets among students from various social groups. After we noticed hiccups in the trial run, we were able to come up with this distribution process so that the educational activities should not be stopped.” Read Also >> Yoga Olympiad 2020: NCERT To Hold Yoga Olympiad Online This Year, Check Details