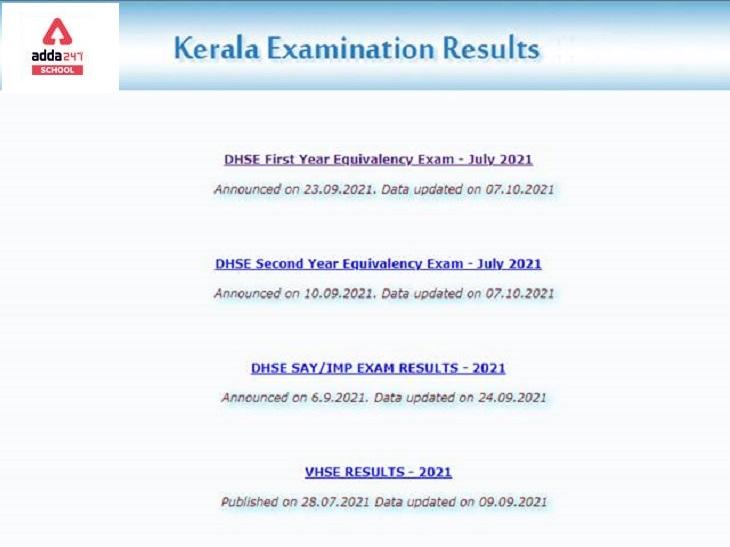 DHSE Kerala Plus One Result 2021out check @keralaresults.nic.in: According to reports, the Kerala Directorate of Higher Secondary Education, commonly abbreviated as DHSE, was slated to announce the Plus One result on November 24, 2021, however, it had been postponed for the time being and will be released sooner or later. The final product will be made available on the internet via websites and apps. Students can access their grades and pass/fail status by checking their results. Those who took the tests can verify their results by checking in to the official websites and applications. Kerala Class 11 Results were expected to be released on November 23rd by the DHSE Kerala.

The DHSE Kerala Plus One Exam Result 2021

Read: All About Preparation of NEET 2022?

DHSE Kerala result 2021 plus one: Where to check on Websites

Read: All About preparation of JEE 2022

DHSE Kerala result 2021 plus one: Where to check on Apps

The Department of Health and Human Services has also promoted a few apps for the reporting of results in 2019 and 2020. Students will be able to check their results on these applications if the DHSE contacts them again this year and provides them with the results.
Among these apps are:

DHSE Kerala plus one result 2021: How to check

To check the result of DHSE Kerala 2021 plus one, follow the below-mentioned steps:

DHSE plus one 2021 exam result

The Directorate of Higher Secondary Education Kerala Plus One Exam 2021 were supposed to be conducted on September 6, however they were conducted on September 24 instead. This was in response to the Supreme Court’s decision to allow the Kerala government to conduct Class 11 HS exams in offline mode, and then the Supreme Court’s decision to stay the state government’s decision to conduct offline exams for Class 11 beginning September 6 amid rising COVID cases for a week, saying “there is an alarming situation in the state.”

DHSE plus one 2021 exam result: Why is it getting delayed

Kerala Plus One Results 2021 was supposed to be announced on November 23rd and 24th, according to reports. The Kerala Board, on the other hand, made no official confirmation of the same, and the result was also not announced. The Kerala Department of Health and Family Welfare has kept a tight lid on the situation. This has resulted in the spread of rumours and speculative information among students via social media platforms. Students are advised to be wary of such false material and to rely solely on reputable sources. They can also monitor the websites of dhsekerala.gov.in for updates on Kerala Plus One Result 2021.

In 1990, the Directorate of Higher Secondary Education was founded. The Directorate is envisioned as a state government central organisation tasked with promoting all-round development in Higher Secondary Education. It will accomplish this by building acceptable ideologies, an adequate institutional network, competent administrative procedures, and a well-qualified and motivated workforce.
The university education had to be separated from the pre-degree studies. This had been accomplished in stages. In 2000-2001, the entire de-linking operation was finished. The Directorate’s primary maladies have been a lack of staff and inadequate infrastructural facilities, but despite these obstacles, sustained efforts by all levels of functionaries at the Directorate have assisted it in becoming a fully-fledged department.

FAQs on Kerala Higher Secondary(DHSE) Plus One Result 2021

When will the Kerala Plus One Exam Result 2021 be made public?

In November 2021, the Kerala Plus One Exam results will be released. It was planned to be released on November 23rd, however it was never released. The date was later rumoured to be November 24th, but the candidates were still disappointed by the postponement.

What is the procedure for checking the DHSE Kerala +1 result?

DHSE Kerala +1 First Year Result 2021 can be found on websites like www.keralaresults.nic.in, kerala.gov.in, and dhsekerala.gov.in, as well as apps like PRD Live, iExams, and Saphalam.

The Kerala Directorate of Higher Secondary Education (DHSE) Plus One Exam 2021 began on September 24, 2021. Around 4 lakh people took part in the exam. The Kerala Plus One Exam was conducted in a paper-based format.
According to rumours, Kerala Plus One Results in 2021 were intended to be revealed on November 23rd and 24th, but the board made no formal confirmation of this, and the result was also not announced.

What exactly is a plus one exam?

For Plus One students, the state administers public examinations. Unlike other examination boards such as the CBSE, it is only conducted by the state. To evaluate eligibility for further education, Plus One marks are added to the total Plus Two marks. Additionally, Plus One exam must be held in order to properly evaluate students.

Was the plus one exam altered in any way?

No. There was no modification in the exam schedule after that, and it was held on September 24, 2021.