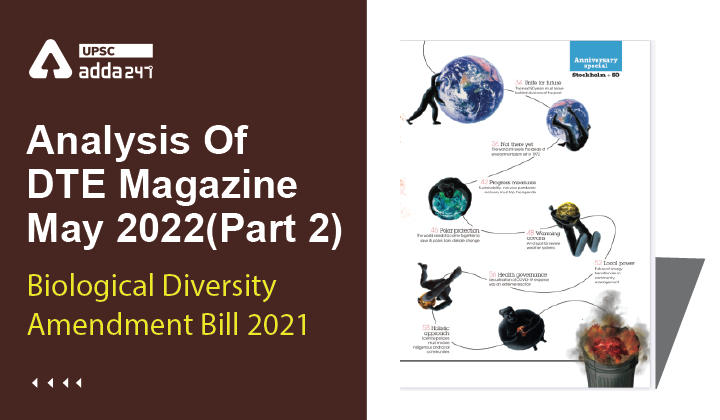 – It refers to the variety of life forms that exist on the planet.
– Human activities on the planet have created challenges for biodiversity such as loss of habitat, deterioration of ecological systems, and extinction or threat of extinction for species.
– There have also been concerns around bio-piracy which involves unauthorised appropriation of biological resources and related knowledge belonging to indigenous communities.
– A key multilateral treaty to address these concerns is the United Nations Convention on Biological Diversity (CBD) from the year 1992.
– Under CBD, two protocols have been adopted: (i) Cartagena Protocol on biosafety (2003), and (ii) Nagoya Protocol on access and benefit sharing (2014).
– India ratified the Cartagena Protocol in 2003 and the Nagoya Protocol in 2014.

– In light of India’s commitments under CBD, the Biological Diversity Act, 2002 was passed by Parliament.
-The Act regulates access to biological resources and associated traditional knowledge.
– It specifies distinct frameworks for regulating access by foreign and domestic entities.
– It sets up a three-tier structure for regulation: (i) National Biodiversity Authority at the national level, (ii) State Biodiversity Boards at the state level, and (iii) Biodiversity Management Committees at the local body level.
– The Act provides for sharing of benefits with conservers of biodiversity and holders and creators of associated knowledge.            – Benefits may be shared in various forms such as: (i) monetary compensation, (ii) sharing of intellectual property rights, or (iii) technology transfer.

Proposed Amendments to the Original Act

– To reduce burden on wild medicinal plants by encouraging their cultivation; – Facilitate environment for collaborative research and investments;
– Improve research patent appli- cation process;
-Reduce need of practitioners and companies making medicinal products for taking permission from the National Biodiversity Authority (nba); – To increase the composition of the authority and revising positions and responsibilities;
– Additionally, it proposes to de-criminalise violation of provisions of the legislation;
– It suggests creation of separate authorities at the Centre and the state levels, withdraws the power given to the authority to file an fir against a defaulting party for violation; and provides for the creation of an inquiry officer, who following an inquiry, can impose a penalty of up to 1 crore in cases of continuous violation.

Present Status Of the Bill

– The bill was referred to a joint committee to include concerns of stakeholders.
– The committee has had nine meetings so far, the last of which was on April 19, 2022.
– It has already deferred the deadlines a few times but is likely to submit its report to Parliament on June 3.

– The amendments do not address some of the major problems on ground.
– The fact is that the entire effort to share benefits with communities has been reduced to, at best, a meaningless bureaucratic exercise.
– The term codified traditional knowledge has not been defined.
– A broad interpretation might exempt all local traditional knowledge from benefit sharing requirements. – The Bill removes the direct role of local communities in determining benefit sharing provisions.
– The Bill decriminalises offences under the Act and instead provides for a wide range of penalties.
– Further, the Bill empowers government officials to hold inquiries and determine penalties.
– It may be questioned whether it is appropriate to confer such discretion to government officials.