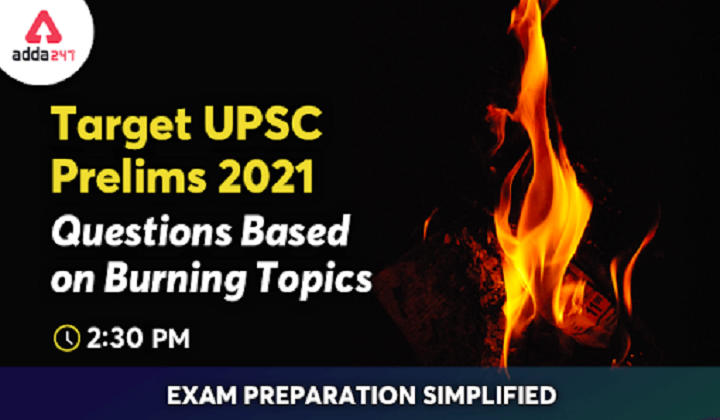 1. Which of the following deals is done with the National Security directive?
(a) Telecom sector
(b) Money laundering
(c) Defence manufacturing
(d) Border protection

2. Which of the following is correct with respect to the United Nations Development Programme (UNDP)?
(a) UNDP is the global development network of the United Nations (UN) headquartered in New York City. UNDP is operational in 177 countries.
(b) The organisation promotes the technical and investment cooperation among nations. . It also helps the countries to achieve the Sustainable Development Goals (SDGs).
(c) It is engaged in giving the expert advice, training and grants support to the developing countries. It works with nations on their own solutions to meet the global and national development challenges.
(d) All of the above

IAS Prelims Mock-Test 2021 – Set 99, 25 January
3. Consider the following statements.
1. Economic Survey is a flagship annual document that reviews the development in the Indian economy.
2. Economy Survey reviews the development of the economy over the past fiscal year and presents a holistic preview of the Budget.
3. Economy Survey is released by the Department of Economic Affairs of the Ministry of Defence.
Options:
(a) 1 and 2 only
(b) 2 and 3 only
(c) 3 only
(d) 1, 2 and 3

IAS Prelims Mock-Test 2021 – Set 98, 23 January
4. Which of the following IIT has tried to establish the association between ambient PM 2.5 exposure and occurrence of anaemia among children under the age of 5 years of age in India?
(a) IIT Delhi
(b) IIT Madras
(c) IIT Bombay
(d) IIT Roorkee

IAS Prelims Mock-Test 2021 – Set 96, 21 January
5. Consider the following statements about the green tax.
1. The Centre announced its plans to impose a “green tax” on older vehicles in a move to disincentive the use of polluting vehicles and to curb pollution in the country.
2. A green tax will be applied on transport vehicles older than eight years at the time of renewal of fitness certificate at the rate of 10% to 25% of road tax.
Choose the correct option:
(a) Only 1
(b) Only 2
(c) Both 1 and 2
(d) None of the above

IAS Prelims Mock-Test 2021 – Set 97, 22 January
7. Consider the following statements regarding the Padma Vibhushan award.
1. It is the second-highest civilian award of the Republic of India.
2. Satyendra Nath Bose, Zakir Hussain, Balasaheb Gangadhar Kher, Nand Lal Bose were among the first recipient of the award in 1954.
3. Shri Shinzo Abe is awarded for Public Affairs in the year 2021.
Choose the correct option:
(a) 1 and 2 only
(b) 3 only
(c) 1 and 3 only
(d) 1, 2 and 3

IAS Prelims Mock-Test 2021 – Set 96, 21 January
8. The Indian Academy of Paediatrics (IAP) has started a program called ‘TB-free air for every child’ in which of the following states?
(a) Uttar Pradesh
(b) Tamil Nadu
(c) Kerala
(d) Karnataka

Know about Nanometer as a probe to sense cancer: Click Here
9. The Honourable Prime Minister Shri Narendra Modi has inaugurated the Integrated Check Post at Jogbani-Biratnagar border, between India and which of the following countries?
(a) Bangladesh
(b) Nepal
(c) Bhutan
(d) Myanmar