Announced by Prime Minister Shri Narendra Modi on 15th August, 2019, with the aim to provide tap water supply to every rural home by 2024, Jal Jeevan Mission has reached a new milestone of providing over 4 Crore rural households with tap water supply. 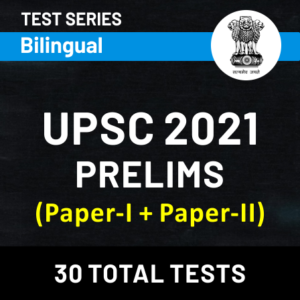 – Goa has become the first State in the country to provide 100% tap water supply followed by Telangana and Andaman & Nicobar Islands.

– The untiring efforts of States/ UTs have helped Jal Jeevan Mission provide assured tap water supply to every family living in 56 districts and over 86 thousand villages.

– States/ UTs are now competing with each other and focusing on the target to ensure that every household in the country gets safe drinking water , so that ‘no one is left out’.

– The remote Kakisnur village of Velairpad Mandal, Andhra Pradesh is home to 200 people amidst thick forest, hilly area with no road connectivity and power supply.

– But, it just received 24×7 potable water supply under Government of India’s Jal Jeevan Mission programme being implemented in partnership with States/ UTs.

– The efforts are in line with Government of India’s endeavour to provide clean tap water in rural households with focus on improving their living standards and enhancing the ‘ease of living’.

– The impact of safe water in Kakisnur village is seen through the improved health outcomes among the village community.

– The road to 100% Functional Household Tap Connection (FHTC) in Kakisnur was indeed tough. District authorities faced impediments as they implemented the Har Ghar Jal programme in this remote village which was accessible after a 20km ride alongside Godavari river.

– Hand drilling machines were loaded on a boat, borewell was drilled close to the local stream, solar power-based dual pump was erected supplying potable drinking water to the entire village.

– Jal Jeevan Mission is being implemented in partnership with the States with an aim to provide potable water in adequate quantity, of prescribed quality on regular and long-term basis.

– Since children are more susceptible to water-borne diseases, a campaign has been launched to provide tap water supply in schools and ashramshalas and anganwadi centres across the country so that whenever the schools reopen, children are provided with safe water for drinking.

– Tap water to be used for cooking mid-day meal, providing handwashing facility and usage in toilets.

– Potable water supply to water quality-affected habitations is a top priority under Jal Jeevan Mission. Efforts are made to ensure safe drinking water is provided to all quality-affected villages especially Arsenic and Fluoride affected rural habitations.

– JJM gives highest priority to potability of drinking water, which will reduce water-borne diseases and improve health of people. States/ UTs are upgrading water quality testing laboratories and opening them to public enabling them to get their water samples tested at nominal rates.

Under the influence of strong lower level southwesterlies winds from the Bay of Bengal, fairly widespread to widespread rainfall with thunderstorm/lightning at isolated places are very likely over Northeast India during 29th March-02nd April with maximum activity on 30th & 31st March, 2021.

– It may cause landslides and inundation of low-lying areas at some places over south Assam, Meghalaya, Tripura and Mizoram during 30th March-01st April, 2021.

– Strong winds may injure people and cattle at open places.

– In the run-up to the polls in Assam, the name of Ahom general Lachit Borphukan, credited with defeating the Mughals in the Battle of Saraighat (1671), has been frequently invoked.

– He was a commander in the Ahom kingdom.

– Known for his leadership in the 1671 Battle of Saraighat that thwarted a drawn-out attempt by Mughal forces under the command of Ramsingh I to take over Ahom kingdom.

– The battle of Saraighat was fought on the banks of the Brahmaputra in Guwahati.

– The National Defence Academy (NDA), ever since 1999 has been conferring the best passing out cadet with the Lachit Borphukan gold medal.

– During the last phase of the Battle of Saraighat, when the Mughals attacked the Assamese forces through the river in Saraighat, many Assamese soldiers began losing their will to fight.

– It was Lachit’s clarion call to all the soldiers that made them fight till their last breath, ultimately resulting in the defeat of the Mughals.

– The World Development Report 2021 provides a blueprint on how to harness the power of data for development, to ensure no one is left behind.

– The Social Contract For Data: To get more value out of data while protecting people against harm and ensuring access and representation. Different data-creating and data-using parties need to safely collaborate.

– The three elements of a social contract for data: Value, Equity and Trust.

Data As a Force For Public Good:

– Public intent data – data collected with the intent of serving the public good by informing the design, execution, monitoring, and evaluation of public programs and policies – are a prerequisite for many government functions.

– Connecting The World: Data Infrastructure is a key part of ensuring equitable access to data for poor people and poor countries.

– Crossing Borders: Data is a tradable asset, but sending them across borders requires adequate data protection.

Recently, the Supreme Court pushed for the appointment of retired judges to battle the pendency of cases in High Courts.

Suggestions given by Supreme Court:

– Guidelines for Appointment of an Ad-hoc Judge: The court orally outlined prospective guidelines for the appointment and functioning of an ad-hoc judge.

– Pendency Beyond a Certain Limit: If in a particular jurisdiction, the pendency goes beyond a certain limit, say eight or 10 years, the Chief Justice may appoint a certain [retired] judge with expertise in those fields of laws as an ad hoc judge.

– The term of such a judge could be extendable.

– Position: The appointment of ad-hoc judges would not be a threat to the services of other judges as the Ad-hoc judges will be treated as the junior most.

– Selection: The retired judges would be chosen on the basis of their expertise in a particular field of dispute and allowed to retire once the pendency in that zone of law was over.

– The retired judges who had handled certain disputes and fields of law for over 15 years could deal with them faster if brought back into harness as ad-hoc judges.

– Under the Article, the Chief Justice of a High Court for any State may at any time, with the previous consent of the President, request any person who has held the office of judge of that court or of any other High Court to sit and act as a judge of the High Court for that State.

– NASA and ISRO are collaborating on developing a satellite called NISAR.

– The satellite will be launched in 2022 from the Satish Dhawan Space Center in Sriharikota, India, into a near-polar orbit.

– It will scan the globe every 12 days over the course of its three-year mission of imaging the Earth’s land, ice sheets and sea ice to give an “unprecedented” view of the planet.

– It will detect movements of the planet’s surface as small as 0.4 inches over areas about half the size of a tennis court.

– NASA will provide one of the radars for the satellite, a high-rate communication subsystem for science data, GPS receivers and a payload data subsystem.

– ISRO will provide the spacecraft bus, the second type of radar (called the S-band radar), the launch vehicle and associated launch services.

– NISAR will be equipped with the largest reflector antenna ever launched by NASA and its primary goals include tracking subtle changes in the Earth’s surface, spotting warning signs of imminent volcanic eruptions, helping to monitor groundwater supplies and tracking the rate at which ice sheets are melting.

– The name NISAR is short for NASA-ISRO-SAR. SAR here refers to the synthetic aperture radar that NASA will use to measure changes in the surface of the Earth.