On 15 November 2020, fifteen Asian Pacific countries including China, Japan and South Korea signed the biggest trade deal at the 37th Association of Southeast Asian Nations (ASEAN) Summit. It is the world’s largest regional free-trade agreement, encompassing about a third of the world’s population and gross domestic product.

What is the objective of RCEP?

The objective of the Regional Comprehensive Economic Partnership (RCEP) is to achieve modern, comprehensive, high-quality and mutually beneficial economic partnership agreement among the ASEAN member states and it’s Free Trade Agreement (FTA) partners. Or we can say that RCEP will progressively lower tariffs and will counter protectionism, boost investment and allow free movement of goods within the region.

As we know that negotiation to finalize the long-overdue agreement entered its final stages and in November 2019, Prime Minister of India Narendra Modi surprised the fellow member nations by choosing to opt-out of it. Why this decision has been taken? Read more to know about it!

Before going into the detail, first, we will see about the countries who have signed the agreement.

The 37th ASEAN Summit was hosted virtually by Vietnam. Vietnamese Prime Minister Nguyen Xuan Phuc said that “The completion of negotiations is a strong message affirming ASEAN’s role in supporting the multilateral trade system.” He further stated that the agreement will contribute to “developing supply chains that have been affected due to the COVID-19 pandemic as well as supporting economic recovery.

To know more about the Energy Conservation Act, 2001: Click Here

Therefore, RCEP was launched in 2012 and we can say that it is the highest trade pact signed between the ASEAN 10 members along with Japan, China, South Korea, Australia and New Zealand.

The agreement focuses on the common set of rules of origin to qualify for tariffs reduction with other RCEP members. That is fewer procedures and movement of goods will be easier. This will boost multinational firms to invest more in the region, consisting of build supply chains and distribution hubs.

As China is the main source of imports and exports destination for various member nations therefore the deal is likely to do it in a better position to shape the trade rules of the regions. From 2022, the new tariff regime will kick and will also see the duties to go back to 2014 levels.

How RCEP come into force?

As per Singapore’s Minister of Trade and Industry Chan Chun Sing, a minimum of six ASEAN countries in addition to three non-ASEAN partners must ratify RCEP for it to come into force. He also said that in the next few months’ plans of Singapore is to approve the deal.

It has also seen that several participating nations are also becoming too economically dependent on China with the pact seen as a coup and extending its influence across the region.

Benefits of the agreement

The benefits include elimination of tariff of at least 92% on traded goods among participating countries and also stronger provisions to address non-tariff measures. It also enhances areas like online consumer and personal information protection, transparency and paperless trading as per the statement issued by Singapore’s Ministry of Trade and Industry. Not only this it will also simplify the procedures of customs as 65% of the services sectors will be fully open with increases foreign shareholding limits.

The reason behind India’s exit from RCEP

The deal was pushed by the negotiators and was across the finish line and India surprised the participants late last year by abandoning the agreement. Prime Minister Narendra Modi told that he pulled out over the concerns about how RCEP would affect the livelihood of Indians, mainly the most vulnerable. Though, India will be allowed to rejoin the trade pact.

On Sunday (15 November, 2020) Prime Minister Muhyiddin Yassin said in a speech that Malaysia recognizes the difficulties India is facing. “Nevertheless, we wish to express our continued support and welcome its accession to RCEP in the future.”

The import duties would have brought down via deal from 80% to 90% of the goods, along with easier service and investment rules. In the Indian industry, some have a fear that a reduction in the customs duty would result in a flood of imports mainly from China with which it has a massive trade deficit. And the trade deficit of India with other RCEP countries was also rising.

Experts also told that whether RCEP changes regional dynamics in favour of China depends on the U.S. response. The agreement also says that how U.S. President Donald Trump’s 2017 decision to withdraw from a different Asia Pacific trade pact — the Trans-Pacific Partnership or TPP — diminished the ability of America to offer a counterbalance to China’s growing regional economic influence.

In the negotiation, the issue of unavailability of Most Favoured Nation (MFN) obligations was also raised by the government, where it would be forced to give the same benefits to RCEP countries that it provides to others. The red flag over the move was also raised to make 2014 as the base year for tariff reduction. 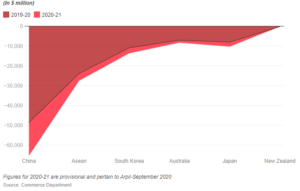 India’s Prime Minister stated the reason about the exit from RCEP that how it would impact the lives and livelihoods of all Indians mainly the vulnerable sections. Also, it has been stated by the officials that India could rejoin talks if it chooses to do it at later date.

In the RCEP, India would have the third-biggest economy. As per the analysts, India might lose investments while its consumers may end up paying more than they should mainly when due to COVID-19 pandemic trade at global level, investment and supply chains are facing unprecedented challenges.

RCEP agreement countries would also lose an opportunity to access the market of India which is also difficult to get into mainly during the current global economic situation. It is an opportunity for India to strengthen domestic industries and to fulfil the dream of becoming self-reliant. Also, the fact can’t be ignored that various sectors including dairy, agriculture, steel, plastics, copper, aluminium, machine tools, paper, automobiles, chemicals and others have also expressed their serious apprehensions on RCEP by explaining the dominance of cheap foreign goods that can also dampen their businesses.

Another thing is how India will tackle trade with the ASEAN countries after backing out from the RCEP. India’s ‘Act East Policy’ will be impacted after Asia-Pacific nations strengthen their ties with China, Australia, Japan, and others.

The government of India agreed to explore an India-China FTA in 2007, during the United Progressive Alliance tenure and also joined RCEP negotiations with China in 2011-12. Following this, the trade deficit with RCEP countries rose to around $78 billion in 2014 from around $7 billion in 2004.

The relationship of India with ASEAN is a key pillar of its foreign policy and the foundation of the Act East Policy. The aim is to strengthen the multi-faceted relationship with ASEAN. Since the early 1990s, it is an outcome of the significant changes in the world’s political and economic scenario and India’s own step towards economic liberalisation.

20 years of dialogue partnership and 10 years of Summit level partnership was commemorated by India and ASEAN in 2012 in a Summit held in New Delhi. The theme was ASEAN-India Partnership for Peace and Shared Prosperity’.

Challenge will be shifted to President-elect Joe Biden as he is officially named the winner of the 3 November election. It is still uncertain that how the team of Joe Biden will approach the deals of trade and whether it tries to re-enter the 11-nation TPP. The signing of RCEP comes as Southeast Asian nations experience uneven recoveries from the pandemic.

As per the economic need, the governments across the region have been negotiating travel lanes and bubbles in fits and starts as official weigh health risks. Some countries are among those who are still dealing with the elevated virus caseloads including Malaysia, Indonesia and the Philippines. And Singapore and Vietnam have so far successfully prevented new outbreaks.

As per Hiroshi Kajiyama, the Japanese trade minister, “Japan is looking for the pact to be a catalyst for its post-coronavirus economy.”

He also stated that “through the tariff removals, I believe there’ll be a major impact on improving Japan’s exports and making the region’s supply chains more efficient.” “I strongly believe we are building free and fair economic rules by introducing new rules on data free flows and the banning of demands for technology transfers, as well as the protection of intellectual property.”

Singapore’s Chan said “over the past years, there have been several ups and downs and it has certainly not been an easy journey. At one point, the prospects of concluding the agreement were shaken by geopolitical and domestic preoccupations. We have all had to make difficult trade-offs to advance the negotiations.”

We are hoping that now the reason is clear why India opted out from the world’s biggest trade deal and about RCEP, India-ASEAN Summit, etc.