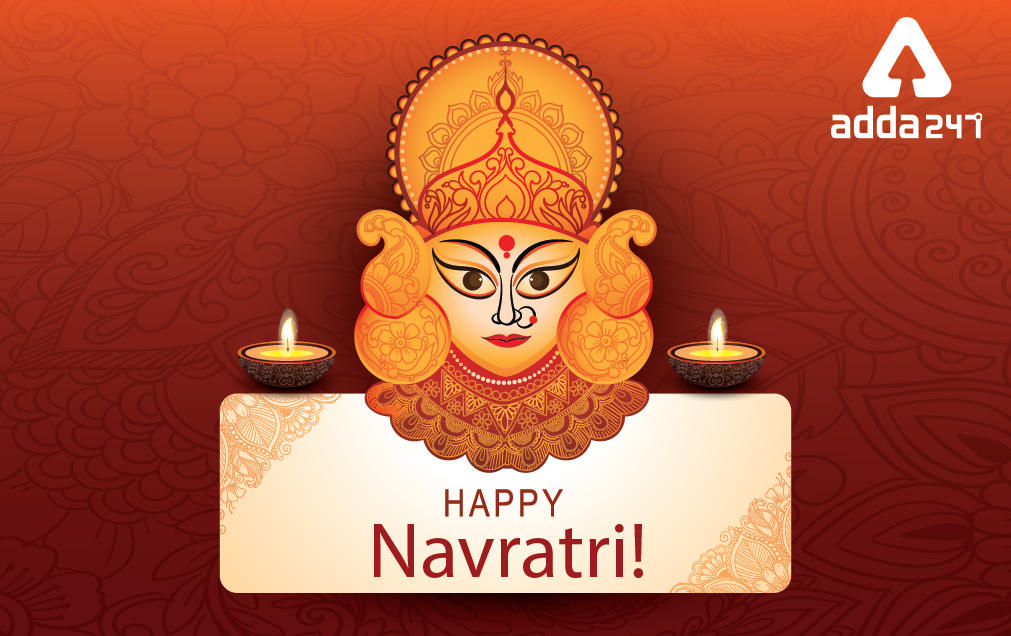 Adda247 wishes all our readers the most joyous, blessed, and fulfilling Navratri.

May this Navratri brings all the happiness and blessing in the world. As the name suggests, the festival of Navratri spans 10 days and 9 nights. During the Navratri festival, people worship goddess Durga with devotion, earnestness, and gaiety. Navratri is a Sanskrit word that literally translates to “ Nine Night”. Thus it’s a festival and celebration of nine nights with utmost austerity and devotion towards Goddess Durga. It is one of the most important festivals for Hindus and it is widely celebrated across India. It is celebrated at beginning of Shukla Paksha of the month of Chaitra. This year, the Navratri festival starts today 2nd April 2022 and ends on 11th April 2022.

Navratri is celebrated twice a year- Chaitra Navratri begins on the onset of spring and Sharada Navratri begin on the onset of autumn. According to Hindu Mythology, it was the span of these nine days when Lord Shiva allowed Goddess Durga to come down to earth to meet her maiden family. During the nine days, nine avatars of Goddess Durga are worshipped on each day. The nine avatars of Goddess Durga are Shailputri, Brahmacharini, Chandraghanta, Kushmanda, Skanda Mata, Katyayani, Kaalratri, Mahagauri and Siddhidatri.

On the ninth day (Navami) of Chaitra Navratri, Lord Ram was born to King Dasharath. Thus, this day is also called Ram Navami. Lord Ram is the seventh avatar of Lord Vishnu and is one of the most widely worshipped avatars.

Temples and other religious places are beautifully decorated during the Navratri. People very diligently and devotedly decorate their houses and worship Goddess Durga while following all the rituals and customs associated with the Puja wholeheartedly. People abstain from consuming non-veg food items, onion, and garlic along with alcohol during these Nine days. It is a celebration of everything good, pure and unblemished.

We hope this Navratri brings to you all the prosperity and success in your life. For candidates aspiring to become teachers in government schools across India, this year has already come up with more than 1.30 lakh vacancies pan India. We wish you all the best and pray to Goddess Durga to bestow the best results of your hard work and dedication upon you.