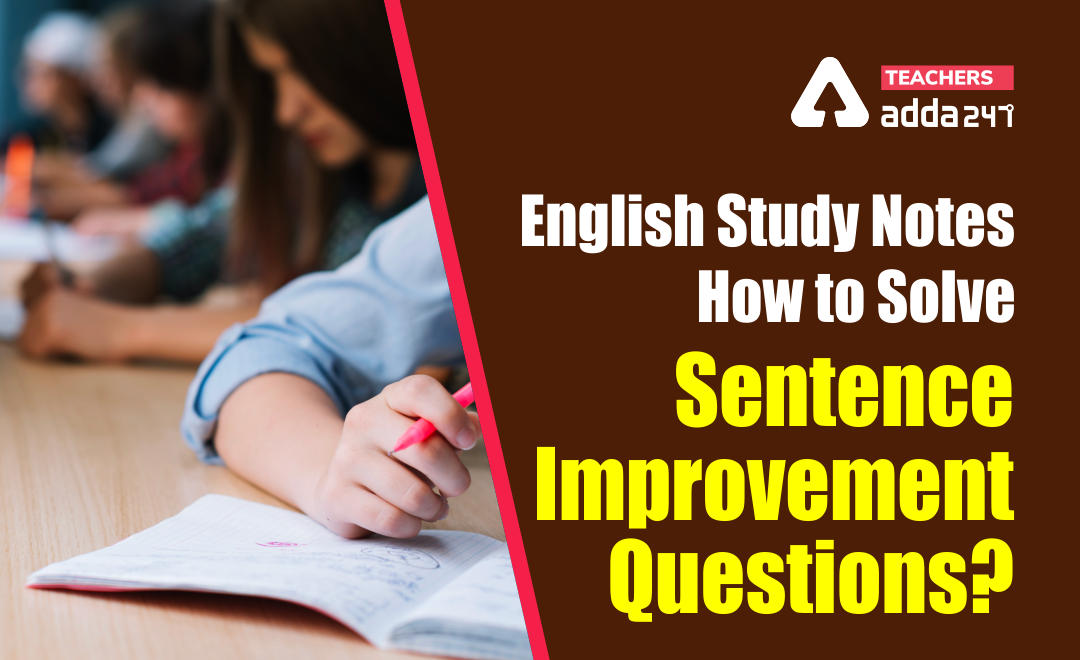 Sentence Improvement is one of the most crucial portions that attract a great concern of the aspirants of teaching exams. Almost every candidate hopes to score as better as he/she can by simply hitting the basic grammar rules. Fundamentals of grammar may or may not be necessary but the tricks and tips should always be done by heart in order to avoid mistakes. The strategies are always better than the knowledge applied. In many teaching exams including CTET, UPTET, Goa TET & HTET etc. English section will have questions based on reading comprehension, sentence formation, synonyms & antonyms, grammatical errors and so on. In which Sentence Improvement is one of the most scoring topics under the English Language sections of teaching exams.

HOW TO SOLVE SENTENCE IMPROVEMENT QUESTIONS:

Keep a Close Watch on the Following Points:

1. Subject-verb Agreement: It is necessary to consider the verb according to the subject. Verbs should always be dependent on the subject or the vice-versa. Like, if the subject is plural then verb should also be plural, and if it is singular, then the given verb will also be singular.

2. Repetition: Sometimes, there is redundancy in the sentence. In other words, the same thing is written twice in a single statement. Most of the times, you can spot such errors easily.

3. Misplaced Modifiers: One of the most common problems is where to place them. Specifically, modifiers can cause confusion or unintentional humor in a sentence when they are placed too far from the noun they are modifying. For example, consider the following sentence:

4. Parallelism: What exactly can be parallelism in sentence? Well, it relates to the structure of the sentence. Putting it other ways, the different phrases/words performing the same function should be used in the same format. Example: 5. Error in diction: A diction error refers to the error in choice of words/phrases. At other times, even some idioms occur in sentences in an incorrect way. Common pair of words and phrases where you may face diction error are:

6. Wrong Comparisons: Sometimes we end up comparing things which are not logical or equivalent. Like, we have to compare furniture with furniture and persons with persons. You can’t compare a table to a person.

In the above example, comparative degree is used. But in case of superlative degree, the person/thing compared is included in the rest of the class. E.g. Ravi is the strongest of all men.

7. Relative noun and pronoun agreement: Pronoun should always have clear antecedent. If it fails to do so, then it should be replaced by a proper noun. Likewise, in the noun agreement, single person or thing can’t take a plural noun or vice-versa.

Some Tips to Improve The Proficiency One Should Keep in Mind:

• Analyze the tone of the given statement or sentence. It can be positive, negative, sarcastic, critical or analytical. Keeping in mind the purview of the whole scenario, one can easily spot the incorrect part of the sentence after a deep analysis.
• Use elimination before you do anything. This is the quickest approach one can easily apply to every situation. If you are unable to spot the exact error, eliminate it.
• It is not mandatory that there should always be errors present in the sentence. Often, there are no errors present in the statement and the sentence is grammatically correct. Try to curtail the tendency of always finding the errors and improving it. You can also go for “no correction required” sometimes.
• Of course, the knowledge of fundamental concepts should be there. And obviously, one must be hand in glove with the grammatical rules of Verbal.

Directions: Which of the following phrases (I), (II), and (III) given below each sentence should replace the phrase printed in bold letters to make the sentence grammatically correct? Choose the best option among the five given alternatives that reflect the correct use of phrase in the context of the grammatically correct sentence. If the sentence is correct as it is, mark (e) i.e., “No correction required” as the answer.

S1.Ans. (b)
Sol. As we read the sentence further, we can easily sum up that the sentence is in present tense. Hence it would be preceded by the present form of tense only i.e. Considering he has played.