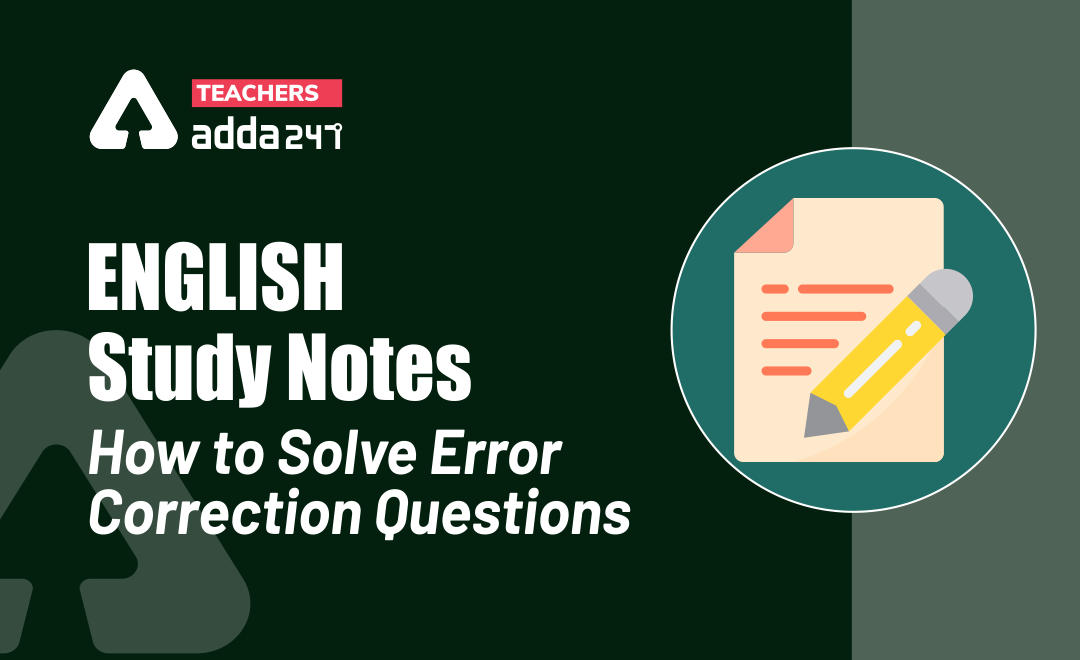 English section is the common section in DSSSB Teaching exam. This section will have questions based on reading comprehension, sentence formation, synonyms & antonyms, grammatical errors and so on. In which Error Correction is one of the most difficult yet scoring topics under the English Language sections of teaching exams.

The Error correction questions are generally related to parts of speech, singular plurals, infinitives, participles, tenses, use of articles etc. To rectify the errors in the sentence, candidates need to aware of basic grammar skills.  In this articles, we are providing you some common types of errors and tips to solve the error correction questions.

Are You Preparing For DSSSB Exam? Grab This Opportunity Now. ENROLL NOW

HOW TO SOLVE ERROR CORRECTION QUESTIONS:

Error Spotting Question Type – 1
The first kind of error in the error spotting questions is about determining whether singular or plural verb is to be used in a sentence. To better understand the same, consider the example –

While this is an easy question, the answer, in this case, would be the option [a]. Many students is’ would become ‘many students are’. So, in the first case, the singular is changed to the plural verb.

Error Spotting Question Type – 2
The second kind of error spotting question involves the case of fillers before the infinite verbs. For reference, an infinite verb refers to anything that comes after ‘to’, such as ‘to play’, ‘to sing’, ‘to read’, etc. Consider this example to better understand the kind of question you may be asked in this case-

In this case, as you might have had guessed, the answer is the option [b]. The infinite verb, ‘to sing’ is incomplete without ‘how’ and hence it is the correct answer.

Error Spotting Question Type – 3
The third and last kind of error spotting question is generally harder than the first two and they involve the tenses of verbs. In other words, in this kind of question, you need to spot the error which has to do with the correct tense of the verb. The tenses error spotting questions are common and hard not because the concept is hard to grasp, but because they can be asked in so many ways. Hence, this kind of question requires more practice. Consider this example –

This is the simplest kind of questions that one could expect from the tenses in the error spotting topic, but it does give a clear picture or idea of the case. In this case, the second option would be [b] and ensured that the king was happy as the event had occurred in the past (as could be determined by the first part of the sentence).

Therefore, it is necessary to know all three types of error spotting questions to best prepare oneself to answer all of them in the exam in an efficient manner.

Even those students who are well – versed with English end up making the silliest of errors in grammar. It is a very natural tendency but error-spotting is not an art that one can’t master. It is just a matter of swearing by some guidelines and practice! Here are 26 tips for error spotting in English:

5. Certain nouns, especially of the collective category, are used as singular when they specify a unit.
E.g. Public, team, committee, government, audience, orchestra, company, jury.
Thus,
The public were unanimous in their opinion. (Incorrect)
The public was unanimous in its opinion. (Correct)

6. Certain nouns, especially of the collective category, are used in plural when they specify a difference of opinion or class.
E.g. Public, team, committee, government, audience, orchestra, company, jury.
Thus,
The jury was divided in its opinion. (Incorrect)
The jury were divided in their opinion. (Correct)

14. ‘As’ is not used with verbs like ‘appointed’, ‘elected’, ‘considered’,’called’ but it is used with the word ‘regard’.
Thus,
He was elected as Secretary of the organisation. (Incorrect)
He was elected Secretary of the organisation. (Correct)
I regard Sahil my best friend. (Incorrect)
I regard Sahil as my best friend. (Correct)

S7.Ans. (a)
Sol. Change, Cattles → Cattle.
‘Cattle’ are one of those collective nouns which though singular in form are always used as plurals.

S8.Ans. (b)
Sol. Change, HAVE → HAS,
Verb → Singular form.
‘Many a’ is always followed by a singular noun and singular verb.