Today, We are providing you the English Questions which help you to evaluate your performance by attempting these questions on regular basis. On daily basis, we will try to provide a variety of study material for English language or English Pedagogy section. These questions will help you a lot to prepare well in Language section in each teaching competitive examination like CTET Exam, KVS, DSSSB, NVS,UPTET etc.
Direction(1-9): Read the passage given and answer the questions that follow, by selecting the most appropriate option.
If you have been missing the once-familiar chirping of sparrows around your house, here’s your chance to contribute to finding out why this common bird seems to have disappeared from cities across India. A two months long online survey called citizen sparrow was launched inviting responses from people on questions such as when they last sighted the bird and details about the area they live in. “It is an elementary step to gather information. We are encouraging people to report their experience, be it a drastic drop in sparrow count or a sudden spurt. These inputs will give us valuable leads to compile pan-India data,” said Suhel Quader, evolutionary ecologist at the National Centre for Biological Sciences.
The disappearance of the house sparrow, so widespread till recently that the Chinese Communist Party declared it a pest in 1958 and asked people to exterminate it, remains a great modern mystery world wide. In the UK, sparrows are estimated to have declined from over 12 million to 6 million, since the mid 80s. “The survey would give us the first baseline data about distribution of sparrows in the country. This would form the basis for further research,” said Karthik K, project coordinator. The objective of involving ordinary citizens rather than experts comes with a purpose. “Almost everyone know about sparrows. It is an attempt to reach out to people, asking them to share their stories and their understanding of these birds,” said Quader.
Participants in the survey would be asked to mark locations on a map and give information about their sparrow sightings, including sightings from last year and even earlier. Such information will enable a comparison of population of sparrows in different places and this is expected to point to particular threats or problems. The findings are intended to feed detailed studies investigating causes of decline and potential measures for the recovery of sparrow populations. The sparrow is an indicator of a trend. A number of other birds have also declined sharply in the past few decades. The survey would provide more clues about why these birds are disappearing.
Q1. The estimated decline in sparrows in the UK is
(a) a quarter of the number in the mid 80s
(b) half of the number in the mid 80s
(c) one-eighth of the number in the mid 80s
(d) three-fourth of the number in the mid 80s

Q2. By marking locations on maps, participants will be able to
(a) inform sighting of sparrows in different places
(b) give an account of sparrows from previous years
(c) tell about sparrows from current years
(d) mark locations of sparrows and give information about them
Q3. The reasons for involving the ordinary citizen are that
(a) they are more committed
(b) they are better than experts
(c) they know about sparrows
(d) they have stories about sparrows
Q4. The trend is that
(a) only sparrows are declining
(b) number of other birds is also declining
(c) people have lost interest in birds
(d) sparrows are increasing
Q5. The passage is about
(a) saving sparrows
(b) evolution of sparrows
(c) elimination of sparrows
(d) dwindling rate of sparrows
Q6. In the sentence ‘findings are intended to feed detailed studies’ means
(a) to give food to sparrows
(b) to give substance for growth
(c) to supply in depth information
(d) food habits of finds
Q7. The function of an ‘ecologist’ is to
(a) study environment
(b) study evolution of birds
(c) study species and their evolution
(d) study habitation of various species
Q8. The outcome of the information collected would be to
(a) investigate causes of decline
(b) help take measures for recovery
(c) study of the behavioural patterns of birds
(d) investigate and take measures for recovery
Q9. Pan-India data would imply data
(a) from selected parts of India
(b) from all over India
(c) from South India
(d) not from India
Q10. A lengthy narrative poem in grand language celebrating the adventures and accomplishments of a legendary or conventional hero is called as
(a) narrative
(b) epic
(c) couplet
(d) free verse
Solutions
S1. Ans.(b)
Sol.
S2. Ans.(a)
Sol.
S3. Ans.(c)
Sol.
S4. Ans.(b)
Sol.
S5. Ans.(d)
Sol.
S6. Ans.(c)
Sol.
S7. Ans.(a)
Sol.
S8. Ans.(d)
Sol.
S9. Ans.(b)
Sol.
S10.Ans(b)
You may also like to read 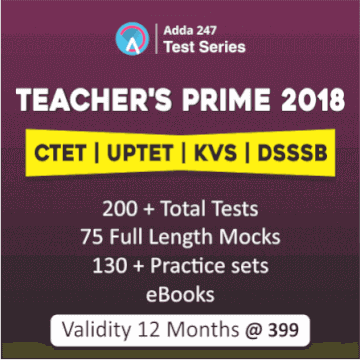