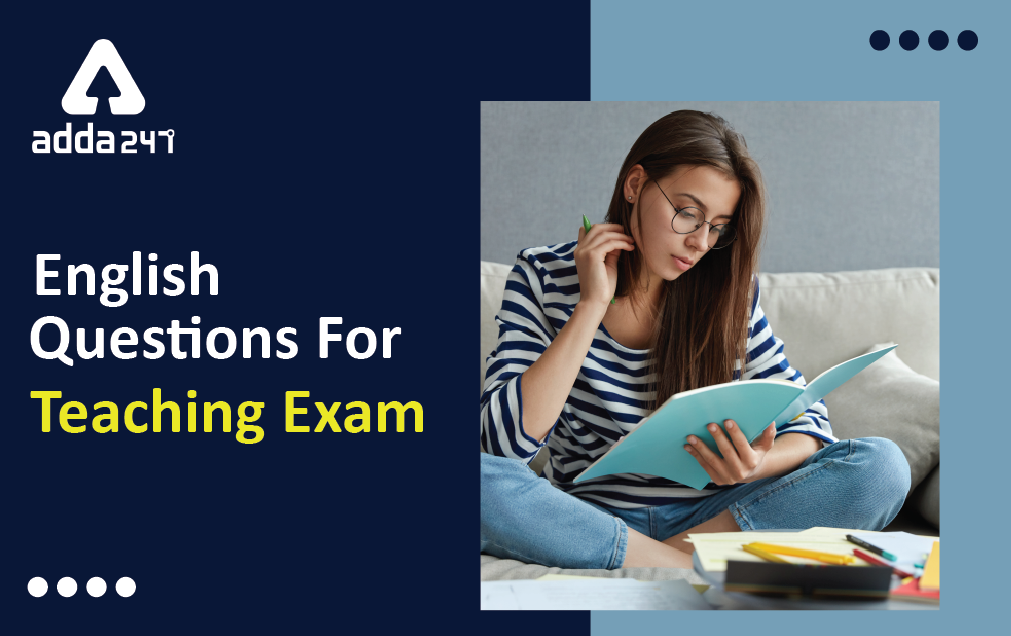 Today, We are providing you with the English Questions which help you to evaluate your performance by attempting these questions on regular basis. On daily basis, we will try to provide a variety of study material for the English language or English Pedagogy section. These questions will help you a lot to prepare well in the Language section in each teaching competitive examination like CTET Exam, KVS, DSSSB, NVS, UPTET etc.
CTET Result 2022 Out
Directions (1-9): Read the passage given below and answer the questions that follow by selecting the most appropriate option.
Edmunde Burke called the press the Fourth Estate of the realm. I think he did not use this title for the Press thoughtlessly as social ruling group or class. The three Estates or Realms (in England) Lords Spiritual (i.e., the Bishops in the House of Lords), the ‘temporal, (i.e. other Lords) and Commons, i.e., the common people. The Press has been rightly called the Fourth Estate as it also constitutes a ruling group or class like the Lords and Commons. It cannot be denied in a free country that the Press exercises good deal of influence in shaping public opinion and pointing out the weaknesses or defects of society or of government and ‘in general bringing to light all those good or bad things in society which would have otherwise remained unnoticed. The power is not limited or put under any check. The Press, instead of, being controlled by anyone controls life and thought of a nation. Hence, the Press constitutes an Estate by itself.
Obviously, thus power which the Press in a country wields depends upon the number of newspaper readers. The opinions and comments of newspapers can influence. The life of a nation only when they are read, by People. Reading in turn, requires that the general mass of people should be educated. Thus, the spread of education determines the extent of the newspapers. Where readers are few; newspapers must necessarily be few. Their influence, in that case can extend only to a small minority of population. In a country like India, the percentage of literacy is very low and the standard of journalism is not very high. So, Press has to play the role of a teacher here.
Q1. Edmunde Burke called the Press
(a) instrument of Public Opinion
(b) distributor of news
(c) the Fourth Estate
(d) lord Temporal
Q2. The term Fourth Estate stands for
(a) an area of land
(b) landed Property
(c) social ruling group or class
(d) instrument of Power
Q3. Out of the following the one which is not included in the Three Estates is
(a) Lords Spiritual
(b) Justices of Peace
(c) Lord Temporal
(d) Commons
Q4. The Free press does not perform the function of
(a) shaping public opinion
(b) supporting at all times the official policy
(c) criticising government
(d) exposing social abuses
Q5. How much power does a Free Press possess?
(a) Only that much power which is allowed by the government of the country
(b) Unlimited power without any check
(c) Unlimited power subject to the maintenance of law and order and public morality
(d) No power at all
Q6. The secret of the Press is
(a) the money which the newspaper owners can wield
(b) the number of newspaper readers
(c) the extent to which it supports official policy
(d) the patronage enjoyed by it of the government
Q7. The number of newspaper readers is determined by
(a) the low price of newspapers
(b) the patronage extended to it by the moneyed people
(c) education of the general mass of people
(d) the availability of newsprint
Q8. The Press exercises power by
(a) enlisting the support of the people
(b) keeping watch over the acts of the government
(c) controlling life and thought of a nation
(d) because it is a great moneyed concern
Q9. The state of journalism in India
(a) is upto the mark
(b) is rather low
(c) is in its infancy
(d) is not very high
Q10. When reading, to ‘decode’ means to
(a) recognize words to understand their meanings
(b) replace long words with symbols
(c) make notes
(d) read superficially for the general meaning
Solutions
S1. Ans.(c)
Sol.
S2. Ans.(c)
Sol.
S3. Ans.(b)
Sol.
S4. Ans.(b)
Sol.
S5. Ans.(c)
Sol.
S6. Ans.(b)
Sol.
S7. Ans.(c)
Sol.
S8. Ans.(c)
Sol.
S9. Ans.(d)
Sol.
S10. Ans.(d)
Sol.