“Teaching Aptitude/ Child Pedagogy” is one of the common in any teaching examination. This section plays a very important part in any teaching examination. This part contains approx. 30-40 questions depend upon the examination pattern that we can easily score only if we practice it on regular basis. These questions are not only for CTET/NVS but also for KVS, DSSSB, UPTET & STET also.So, we will provide you the questions which will help you in preparing for Exam.
Q1. A mechanism that Piaget proposed to explain how children shift from one stage of thought to the next is called
(a) Equilibration
(b) Conservation
(c) Transitivity
(d) Knowledge transfer
Q2. Reversible mental actions are called
(a) Focal points
(b) Symbolic thought
(c) Abstractions
(d) Operations
Q3. In Piagetian terms, the cognitive ability to solve problems that develop in adolescence is called
(a) Trial and error reasoning
(b) Hypothetico-deductive reasoning
(c) Concrete thinking
(d) Transitivity
Q4. According to Lev Vygotsky’s concept of the zone of proximal development (ZPD), learning is
(a) Achieved by discovering which answers will lead to rewards.
(b) Achieved by assimilating new understandings to accommodate the demands of the world.
(c) Affected by how the environment and genetically programmed learning ability interact during a critical period.
(d) A social activity between a less knowledgeable child and another adult or child who is more knowledgeable.
Q5. A toddler is likely to learn something in the zone of proximal development if
(a) The toddler has mastered all the skills necessary
(b) Parents or teachers do not interfere.
(c) The task is more difficult than the child can do alone.
(d) The toddler needs little or no help from a parent or teacher.
Q6. Which of the following reflects Lev Vygotsky’s beliefs about language and thought?
(a) Children who use a lot of private speech are usually less socially competent.
(b) Children use internal speech earlier than they use external speech.
(c) Language and thought initially develop together and then become independent.
(d) All mental functions have social origins.
Q7. Vygotsky’s theory of cognitive development best reflects an
(a) Behaviourist approach
(b) Information-processing approach.
(c) Structuralist approach
(d) Social constructivist approach
Q8. Which of the following educational practices is supported by Piaget’s theory of cognitive development ?
(a) Teachers should treat children as passive receptacles
(b) Assessment should focus on the use of standardized tests
(c) Teachers should require rote learning that is tested frequently
(d) Classrooms should be less structured, allowing for discovery learning
Q9. Vygotsky’s theory of cognitive development is similar to Piaget’s theory in that it
(a) Emphasizes that children actively construct their knowledge and understanding.
(b) Describes how children develop by inter-acting with the physical world
(c) Proposes four stages of development that are age-related.
(d) Emphasizes how children develop through social interaction.
Q10. ——— occurs when a teacher adjusts his or her level of support and guidance to the level of skill of the student.
(a) Modeling
(b) Assimilation
(c) Scaffolding
(d) Transference
Solutions
S1. Ans.(a)
S2. Ans.(d)
S3. Ans.(b)
Sol. Piaget’s identified five characteristic indicators of adolescent cognitive development and named them as follows: 1) formal operations, 2) hypothetico-deductive reasoning, 3) propositional thought, 4) the imaginary audience, and 5) the personal fable. In addition to the ability to perform abstract mental operations, teens become more scientific and logical in the way they approach problems. Piaget called this methodical, scientific approach to problem-solving, “hypothetico-deductive reasoning.”
S4. Ans.(d)
S5. Ans.(c)
S6. Ans.(d)
S7. Ans.(d)
S8. Ans.(d)
S9. Ans.(a)
S10. Ans.(c)
Prepare for CTET 2019 Exam with Study Plan 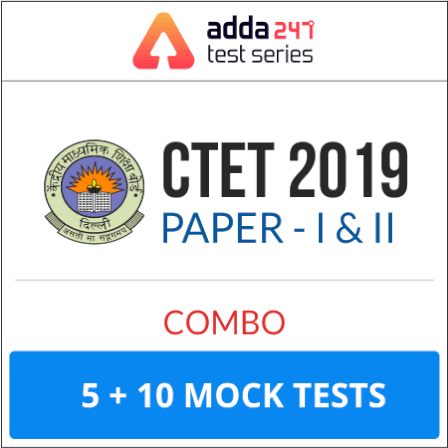