Skip to content
Online Tution   »   Which is the largest Indian Museum 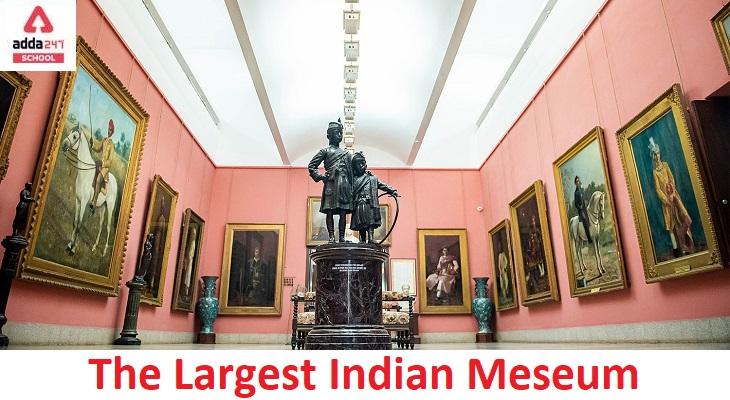 There is a famous saying that says, “History repeats again!” Meanwhile, we are not so sure if it repeats or not, but History can somehow be ‘kept safe’! Be it through pictures, souvenirs, old coins, tickets, paintings, clothes, perfumes or idols, all these materialistic riches make us travel through the past; somehow!
If you are a keen history lover, you already know where you can find all this stuff to relocate to history! Yes, you guessed it right, it is at the museums!
Here in this article, we will know which is the largest Indian museum! Keep reading to know about the largest Indian museum.

Which is the largest Indian museum: Indian Museum, Kolkata

The Indian Museum is the country’s largest museum, located in central Kolkata, West Bengal, India. In colonial-era texts, it is also known as the Imperial Museum at Calcutta. The Indian Museum in Central Kolkata, India’s largest museum, is also the world’s ninth oldest museum, with rare collections of antiquities, armour and decorations, fossils, skeletons, mummies, and Mughal masterpieces. The Asiatic Society of Bengal was founded in Kolkata (Calcutta), India, in 1814 by foundation curator Nathaniel Wallich, a Danish botanist.
It is divided into six sections, each with thirty-five galleries. Indian art, archaeology, anthropology, geology, zoology, and economic botany are among the cultural and scientific items on display in the galleries. The art and archaeology divisions house internationally significant collections.
It is a self-governing body within the Ministry of Culture of the Indian government.
The Board of Trustees, under its Directorate, has administrative control over the Cultural sections, namely Art, Archaeology, and Anthropology, while the geological survey of India, the zoological survey of India, and the Botanical Survey of India have administrative control over the three other science sections. Furthermore, the museum directorate has eight co-ordinating service divisions, and this multipurpose institution with multidisciplinary activities is listed in the seventh schedule of the Indian Constitution as an Institute of National Importance.

Read: States and Capital of India

It is currently housed in a magnificent mansion and houses a number of artefacts, including an Egyptian mummy. The mummy is undergoing restoration.
The full railings and gateways of the Buddhist stupa from Bharhut are among the many ancient and mediaeval Indian treasures on display. The Bharhut panels are one-of-a-kind in that they are labelled in Brahmi writing. This museum houses Buddha’s relics, a replica of Ashoka’s Lion Capital carved from an Ashoka pillar whose four-lion sign became the official emblem of the Republic of India, prehistoric animal fossil skeletons, an art collection, rare antiques, and a meteorite collection.
The floral, insect, animal, and bird galleries are among the museum’s four natural history galleries. It also houses prehistoric items such as a massive dinosaur skeleton.

The idea of having a museum started in 1796 from members of the Asiatic Society as a place where man-made and natural things acquired could be maintained, cared for, and shown, and the goal began to look feasible in 1808. It was when the Government of India offered the Society sufficient accommodation in the Chowringhee-Park Street neighbourhood.
On February 2, 1814, Nathaniel Wallich, a Danish botanist, wrote to the Asiatic Society’s council, requesting the establishment of a museum based on his personal collection. The council readily agreed, and the Museum was established, with Wallich named Honorary Curator and then Superintendent of the Asiatic Society’s Oriental Museum. Wallich also contributed a number of botanical specimens from his own collection to the museum.
Its office was established in 1851 in a rented building at 1, Hastings Road, now K N Roy Road, the current location of the New Secretariat. In 1856, the geological collection of the Government of India’s ‘Museum of Economic Geology’ was moved to this location by the Asiatic Society. A decade later, a campaign for a full-fledged Museum was vigorously pushed, but the push for a full-fledged Museum was stymied by the intervention of the East India Company’s sepoys. Once things had calmed down, the case was pursued once more.
In 1867, the Indian Museum was founded on its current location. The Geological Survey of India, which included the Museum of Economic Geology, relocated here in 1877 from rented premises on 1 Hastings Road.
The Asiatic Society, on the other hand, gave up its rights in order to maintain its independence from the government. The Geological Survey of India is still housed in the Indian Museum Complex buildings.
In 1916, the museum’s Zoological and Anthropological divisions formed the Zoological Survey of India, which was followed by the Anthropological Survey of India in 1945.
From September 2013 until February 2014, the museum was closed to the public for restoration and renovations.

FAQs on Which is the largest Indian Museum?

Who is the largest museum?
The Louvre, located in Paris France
Which is the No 1 museum in India?
The Imperial Museum at Calcutta.
Where will you find the largest museum of India answer?
The correct answer is Kolkata.
Where’s the biggest museum in the world?
Paris
What are the 10 most famous museums?

Who is the largest museum?

The Louvre, located in Paris France

Which is the No 1 museum in India?

The Imperial Museum at Calcutta.

Where will you find the largest museum of India answer?

The correct answer is Kolkata.

Where's the biggest museum in the world?

What are the 10 most famous museums?