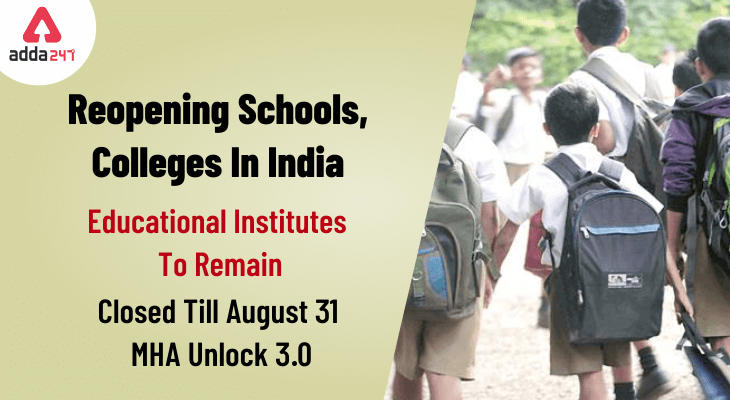 Unlock 3.0 Guidelines: The wait for reopening of schools and colleges got extended by another month as the Ministry of Home Affairs in its latest guidelines for Unlock 3.0 specified that all educational institutes will remain closed till 31st August 2020. Though the government has announced various relaxations including re-opening of gyms and yoga centres along with the cancellation of the night curfew, the reopening of schools has been delayed further. Check| NCERT Solutions: Complete Solutions For Class 9 to 12 And NCERT Solutions PDFs

The decision to not re-open the schools has been taken after detailed consultations with the states and the union territories. The state governments and officials expressed their apprehensions regarding the reopening of schools as the threat of COVID-19 cases would rise exponentially, once the educational institutions are re-opened. The decision on reopening of schools would be taken only after consultations with various stakeholders and assessment of the situation.

Government Explains The Rationale Behind The Decision

When questioned about the decision of foreign countries to gradually re-open the schools, the senior officials from the government explained the reason behind the decision to not open the schools in India. A senior officer stated that, “Indian schools are not merely the sophisticated larger brick structures – they are also these small schools where students huddle together in small villages. Check | New Education Policy 2020 Highlights: School And Higher Education to See Major Changes

As such, opening schools may simply lead to an exponential increase in the already rapidly increasing number of cases.” Unless the spread of the pandemic comes under control, the government will be wary of reopening the schools and colleges as social distancing would be difficult to implement in these places.

Safety of the students is paramount

While many schools in Europe and China are gradually returning to normalcy, Indian administration is still apprehensive regarding the reopening of the schools and has put the safety of students as paramount. While undoubtedly the loss of the academic year is a serious matter, it cannot compare with the importance of the safety of the students. Check Also | Manodarpan: HRD Minister Launches Student Counselling Initiative to Help Kids Manage Stress Better

Social interactions at schools and colleges will put the safety of the students and other staff members at risk. The parents have expressed agreement with the decision of the government, school and college management and teachers are eagerly awaiting the return to normalcy, which might take some time to materialize.