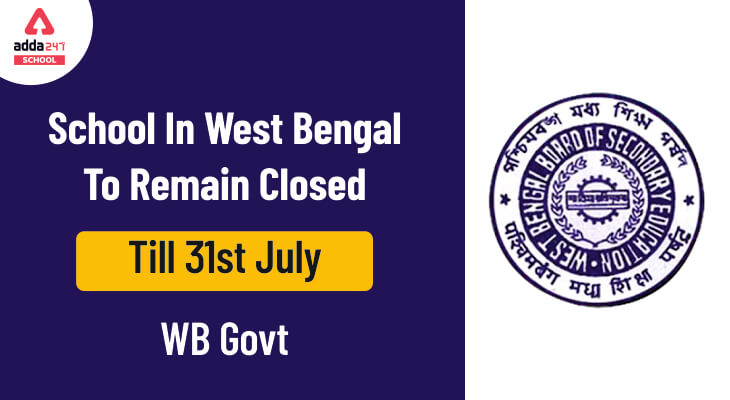 School In WB To Remain Closed: The education sector in West Bengal was already reeling from the impact of the Coronavirus pandemic but the blow dealt by the Cyclone Amphan has put more pressure on the system. As a result, the state government of West Bengal has decided to close the schools in West Bengal till 31st July 2020. The decision of the state government was made after several school buildings in eight districts in the state were damaged by the cyclone. It is also being speculated that most of these buildings will be used as quarantine centres for migrant workers, who are arriving in the state from other regions.

Previously, the government had announced the closure of the schools till 30th June 2020, but now after these decisions, schools in the state will remain closed till 31st July 2020. So, the students are left with no other option but to continue their education with the help of the available online and offline resources. Though the rescheduled class 12th board exams in the state will be conducted as usual on the announced dates, i.e. 2nd July 2020, 6th July 2020, and 8th July 2020.

Detailed Announcement Made By The Education Minister of West Bengal

The education minister of West Bengal, Mr Partha Chatterjee while interacting with the media said that the state government had instructed the West Bengal Council of Higher Secondary Education to put in place adequate arrangements for conducting the class 12th board exams safely. Safety precautions have been put in place at the 1058 examination centres to ensure that the students do not face any problems. He further informed that the cyclone had damaged 462 examination centres and the authorities are trying to look for alternate examination centres. He further added that “If necessary, the buildings of some colleges can also be used for the higher secondary exams.”

Help Required From The State Government Of West Bengal

The eight districts that have suffered the damage due to the Amphan are East Midnapore, Kolkata, Hooghly, South 24 Parganas, East Burdwan, North 24 Parganas, Nadia, and Howrah districts. After conducting a meeting with the officers of the education department, the minister stated that the cost of the damages has been pegged at around Rs. 700 crores. The education department will submit a report to the state government and will be asking for the necessary help. Check | WBBSE 10th Results 2020 Delayed, To Be Released By August

In the meanwhile, to minimize the impact on the education of the students, the government has asked the coordinators to make sure that the teachers take the classes of the students at their homes if they live in the same locality. There is also a proposal to deliver free textbooks to the students who have been affected by the cyclone. The minister further added that “We will work out the modalities in this regard very soon.”