Skip to content
Online Tution   »   Rajasthan Schools Shall Not Waive Off... 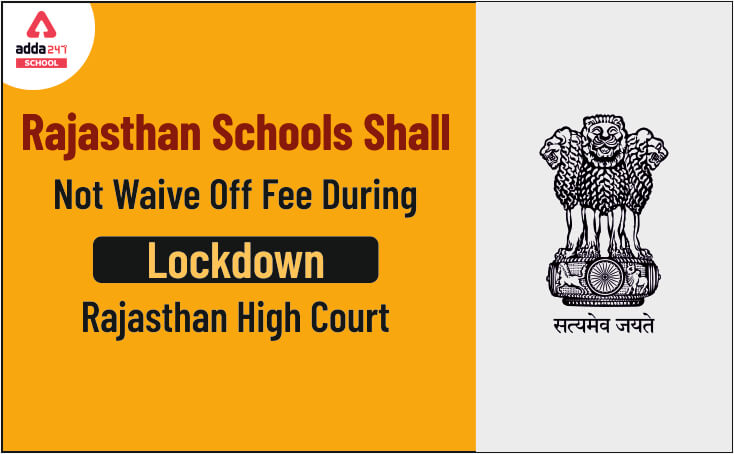 The education sector in the country has been one of the worst affected by the Coronavirus Pandemic. Schools across the country are reeling under financial burden ever since the nationwide lockdown has led to the schools being shut since March 2020. No academic activities are being conducted in the school premises, and the possibility of resumption of classroom sessions does not look possible for the time being. But the same has been the situation for the parents who are unable to pay the fees as they are unable to work due to the lockdown.

But now there is an important update for the students in Rajasthan. While hearing a plea filed by advocate Rajeev Bhushan Bansal, the Rajasthan High Court Decided that the schools need not waive-off the fee during the lockdown. While issuing the order, the court declines to further intervene in the matter. But the bench also specified that if due to the prevailing circumstances, any parent is unable to pay the fees, the name of the child should not be struck-off from the rolls under any circumstances.

Advocate Rajeev Bhushan Bansal had filed a PIL in the Rajasthan High Court in which he said that many parents are unable to pay the fees because due to the lockdown businesses are closed and people are under tremendous financial stress. He also stated in his plea that private schools are not functioning presently and therefore, the court should put a check on fee collection being carried on by the schools.

The division bench disposed of the plea after the hearing. The bench consisted of Justice Sabina and Justice Chandra Kumar Songara.

Ganesh Meena, who is the Additional Advocate General of Rajasthan, was also present during the hearing. He submitted that “the State has this year already made a policy decision deferring the due payment of private schools fee, as on March 15, 2020, for three months.” He further stated that “Also, it was notified that none of the student’s name could be struck off the list on account of non-payment of fee.”

Taking cognizance of the submissions made by the Additional Attorney General, the court stated that there were no further grounds for the court to interfere in the matter and thus the petition stands disposed of accordingly.

While the court refused to interfere in the matter, the submissions made by the AAG have come as a relief to the parents who have been facing financial distress due to the extended lockdowns due to the Coronavirus pandemic. Students should not let these matters distract them and should rather focus on their studies with the help of the online learning resources made available.