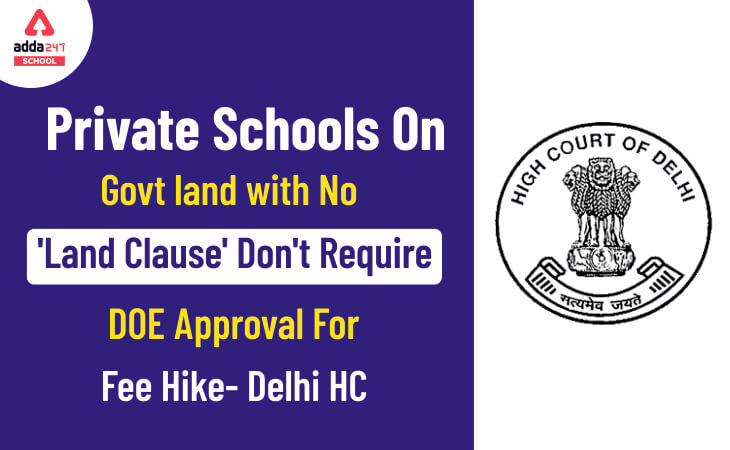 There is an important judgment pronounced by the Delhi High Court regarding the need for prior approval for fee-hike in private schools constructed on the government land with “no land cause.” The High Court ruled that the private unaided schools in Delhi need not seek prior permission from the Directorate of Education in order to increase the fees, i.e. they can increase the fees without any approval from DoE if the land has been allotted by the land-owning agency without any pre-condition of seeking the approval of DoE for increasing the fees. Though, the judge clarified that the DoE would have the right to interfere if it is established that the fee hike would lead to profiteering and commercialization of education.

The verdict was pronounced by Justice C Hari Shankar in a plea filed by Ramjas School (petitioner) against an order of the DoE which stated that not only can the school not increase fees but if any increased fee has been obtained from the parents, the same must be refunded or adjusted with the fee payable for the upcoming session.

The High Court said that “The impugned order, dated July 18, 2017, issued by the DoE, is quashed and set aside, to the extent of Directions therein, with consequential relief to the petitioner.”

The order further read, “It is clarified that, in the case of an unaided school, which has not been allotted land, by the land-owning agency, subject to the condition that prior approval of the DoE is required to be obtained before increasing its fees, the school would not be required to obtain any such prior approval, before increasing its fees in any ensuing academic session.”

Directorate Of Education Can Interfere In Some Circumstances

Though, the High Court offered relief to the schools but on the other hand clarified that the DoE could interfere to stop profiteering by schools. The High Court order read, “The DoE would have the jurisdiction to interfere, with the statement of fees submitted by such school under Section 17(3) of the Delhi School Education (DSE) Act, only by returning a positive finding that, in the light of the existing financial position of the school, the proposed increase in fee would result in profiteering, and, thereby, in the commercialization of education, and not otherwise.“