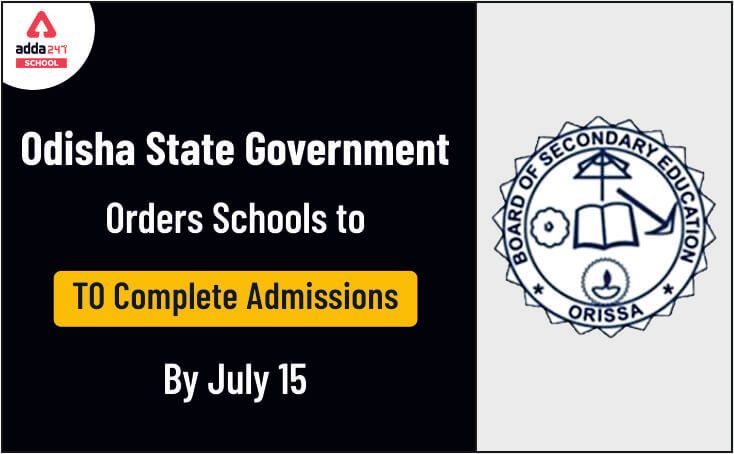 Odisha School: The nationwide lockdown has had a serious impact on the education sector of the country. The repeated extensions of the lockdown have delayed the admission process for the new academic session, creating a sense of uncertainty amongst the parents and the students. As the concerns regarding the reopening of the schools are growing, the State Government of Odisha has decided to start the school admission process for elementary and secondary school level students from 8th June 2020.

According to the latest updates shared by the School and Mass Education Minister of Odisha, Mr. Samir Ranjan Dash, the admission process for primary, upper primary, and secondary school students will commence from 8th June 2020 and would be finalized by 15th July 2020. He stated that “We could not conduct class exams as schools have remained shut since March 20. We have decided to start the admission in elementary and secondary schools from Monday. This year, admission will be held in all schools, even in those with less than 20 students.” Check Also | School News: Schools And Colleges In Odisha To Remain Shut Till July End – Odisha Govt.

The education minister elaborated that while the schools can only be reopened in the month of August as per the latest order of the MHA, the admission process will still be conducted. This will help the authorities in estimating the number of students who are taking admission in the government schools so that plans for resumption of classroom sessions can be finalized as soon as possible. Check >> NCERT Released Alternative Academic Calendar For CBSE 11th And 12th: HRD Minister Announces New Updates

Detailed Guidelines Issued By The Government

As per the decision taken by the government, the admission process will have to be finalized by the schools’ latest by 15th July 2020. The admission process will commence from 7.00 AM every day and will end by 9.30 AM on the working days. At any given time, only 5 parents with their children will be allowed to visit the school at any given time. It will be mandatory for the students and the parents to observe social distancing, wear face masks, and use hand sanitizers for their safety. While some parents associations have welcomed the move, several state-level parents associations have opposed the decision. They contend that state government guidelines do not allow children below 10 to move out of their homes. Then how can the admission process be completed for such students? The government has not yet responded to this contention. Check >> CBSE Exam Results 2020 By Aug 15, Schools May Open After August – HRD Minister

Enrolment To Continue For All Schools

The state government had earlier decided to merge schools with less than 20 enrolments with other bigger government schools in the region. But for now, this decision has been put on hold. The education minister elaborated on this issue and stated that “Though we had earlier asked the District Education Officers and other officials to identify such schools and merge them with other nearby schools, the decision has been put on hold in view of the Covid-19 pandemic.”