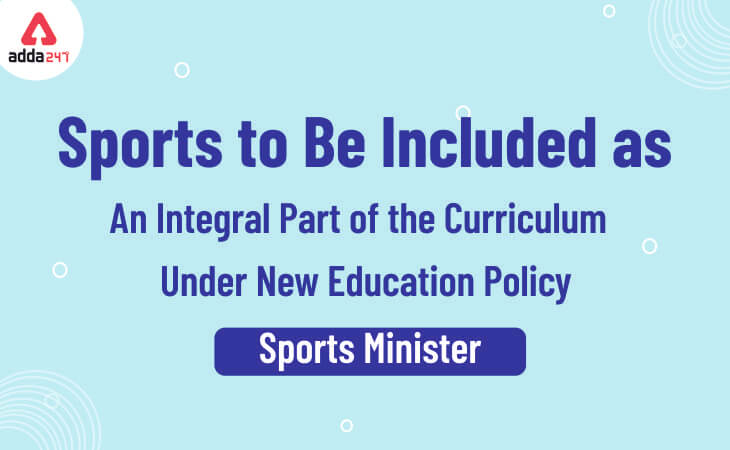 New Education Policy And Sport: While interacting with the media during the opening session of the International Webinar on Olympism and Olympic Education in the 21st century,’ the Union Sports Minister, Mr. Kiren Rijiju stated that in the country’s new education policy, sports will be included as a part of the curriculum and will not be further treated as an extra-curricular activity. He was quoted as saying that, “The new education policy of India is also going to have sports as a part of education (and) sports not as extra-curricular activities.” Check >> Yoga Olympiad 2020: NCERT To Hold Yoga Olympiad Online This Year, Check Details

The minister further added that sports must be made a mandatory part of the education and should no longer be considered as an additional or optional subject. He said that he believes that education and sports are the same and should be treated as equals. His exact words being, “Sports is also an education, so sports cannot be extra-curricular activities. Thereby sports cannot be treated as an optional subject. Sports, as part of education, has to be accepted by all.”

Significant Initiatives Taken By The Government In This Direction

The minister stated that “The new education policy of India is not officially declared yet, but it is almost in the final shape. My ministry has already pushed very strongly during our interaction and my participation in the national committee to make sports an integral part of the education system.”

He also informed the media that the government has set-up a high-level committee to form the National Sports Education Board. He was quoted as saying, “I am very happy to share that we have already announced our National Sports Education Board. Now it is in a formation stage, and I have constituted a very-high level committee, and this committee is under discussion on how to bring the national sports education board into shape.” Check Also >> Karnataka School: No Online Classes For Children Till Class 5, Karnataka Government

Olympic Museum Must Be Constructed In India

The sports minister also expressed his keen desire to construct an Olympics Museum in the country. But he said that these plans would have to wait for some time until the COVID-19 situation normalizes across the nation. When asked about the plans for an Olympic Museum, he stated that “About the Olympic Museum, I personally feel that the Olympic Museum is a very important treasure. We need to have in every country and a country like India, we have a good legacy, we must have that. So maybe after this COVID-19, when everything is over, we will discuss having a beautiful (and) worthy of calling it (an) Olympic museum, maybe in Delhi, maybe in our National Stadium. I am very keen to have an Olympic Museum in India.” Read | CBSE Exam Results 2020 By Aug 15, Schools May Open After August – HRD Minister